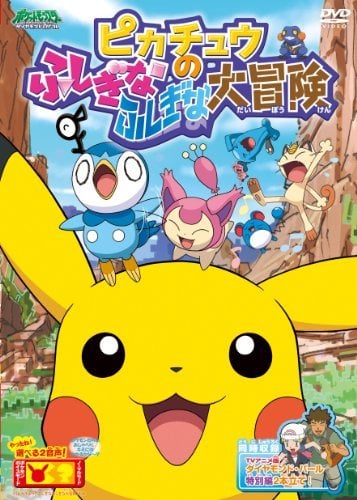 If you're looking for anime similar to Pokemon: Pikachu's Big Mysterious Adventure, you might like these titles.

Pikachu, Togepi, and many other Pokemon are relaxing at the beach one day, playing amongst the waves and sand. Soon, a rousing game of hide and seek is proposed, and tag, Pikachu is it! Sunflora hides amongst the flowers, Sandshrew blends into a brick wall, and Totodile leaps into the water - but Pikachu is too clever and finds them all! Meanwhile, Wobbuffet and Meowth are mowing a nearby lawn and the lawnmower goes incredibly awry. Now, the gang must escape the lawnmower's approach and finish off their lively game!

Ash, Misty and Brock are taking a break from their pokemon-battling adventures to take a rest in the city, leaving their pokemon to run free for the day. Pikachu is quickly swept up in a game of cat and mouse with two local Pichu, leading him to the ultimate inner sanctuary: a tire-laden playground full of pokemon! However, a run-in with danger threatens the stability of the structure; can Pikachu, the Pichu and the rest of their new friends band together to save the day?

Pikachu, Togepi, Psyduck and other Pokemon friends are taking a much-needed nap under a shady tree when suddenly, Togepi rolls down the hill, out of sight! The gang quickly rallies to find him, propelling themselves into a grand adventure. From investigating a deep cavern to flying through the skies, Pikachu and his friends will have tons of fun and even help a stuck Charizard in the process!

The first in the world! A performance created by the cries of Pokémon! The Pokémon will play a beautiful harmony. Will Pikachu and the others be able to pull off the performance?

Ash and the gang are spending the holidays in a house by the sea, and they leave their Pokémon to look after things while they run errands. As the Pokémon explore the house, they admire all the holiday trimmings, including party hats, delicious treats, and a Christmas tree. Bulbasaur and Squirtle get into a fight over the treats, while Vulpix gets stuck in a stocking. Pikachu tries to keep everyone from wrecking the house, but it's too much for one Pokémon. Before long, the Christmas tree is toppled and the lights have been blown out! Now Pikachu needs everybody's help to put the house back together.

Pokemon Movie 3: Spell of the Unown

Molly is a young girl who is fascinated by her archaeologist father's stories of legendary pokemon - especially the regal Entei. But when her father vanishes, Molly is left alone; and her grief causes her to accidentally summon the mysterious Unown, who subsequently transform the castle and surrounding land into a crystalline wasteland. Once Ash's mother is kidnapped by Entei to be a surrogate mother to Molly, he and the gang must make their way to the castle to save both her and Molly alike from the grip of the Unown...

It’s been one thousand years since the Kingdom of Guardia was established, and to celebrate the citizens are holding a festival. Though what most people don’t know is that the night before this celebration marks the Millenial fair for the world’s monsters. After the sun has set, a portal opens and the creatures begin their own celebration, complete with various food stalls and carnival games. Two creepy critters, Nuu and Mamo, are attempting to recruit new team members, but when they prove to be unsuccessful they decide to check out the festivities instead. Whether they’re annoying the live entertainment or taking part in a drinking contest to win a golden shovel, the pair is making the most of the fiesta and plan to kick back and relax – that is until they meet a large, singing robot named Gonzalez…

The regal Slowking awakens one calm morning on Shamouti Island, eager to face the day. There are plenty of things Slowking likes, including coconuts, taking walks, afternoon naps and sunsets – and today, he’ll experience them all!