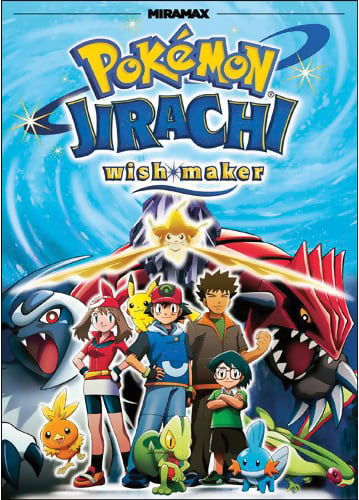 Really fun movie. Pokémon was never the best looking animation, so if you're looking for flawlessness, don't stop here.

What a difference a year makes! An actual plot (kind of), fluid animation (barely), a classic soundtrack borrowing elements from the older films and games (mixed in with the usual cheese-pop with an even cheesier translation) and more time for our individual characters to shine (only Misty isn't here anymore).

So things are not quite as they seem when a random-ass circus parks itself literally at the feet of Ash, Brock, May and Max, who are travelling through a random-ass desert to catch a glimpse of a random-ass comet which only makes an appearance for seven days, every thousand years (the clue is in the name). Who is this mysterious magician going by the name of Butler? For what purposes does he keep Jirachi? The story is pretty simple but held one or two cute surprises which definately elevated it above Pokemon Heroes (not hard to do I tell ye).

The animation wasn't so badly stitched together, and stayed colourful throughout (especially with the introduction of a bunch of Gen III Pokemon towards the end). If CGI was used throughout it was well hidden, unlike the garish mess of the last movie. The only time it was noticable were short sections towards the end which involved a giant platform thing.

The soundtracks to the franchise have always beeng great in my eyes, so it's always nice to hear them again. I grew up with the dub so I'm fine with it, but I don't like the translated pop songs. Lyrics like that should stay in Japanese (at least then they actually rhyme).

I actually thought the characters had a few more dimensions than usual! Ash's small confession that he misses a certain someone and thinks about her everyday, comforted by the fact that he knows he'll always have a best friend thinking of him too, that really hit me in the heart-bone! I LOVED MISTY TOO! And while I don't think I've seen an episode with Max in before, his attachment to Jirachi was pretty moving if you read enough in to it. He seems like a kid who is secretly quite lonely: no friends his age, hanging around with three older kids. Here was a Pokemon who wanted a friend, perfect. Jirachi at first kind of seemed like an asshole but it's such a typically Pokemon-trainer attitude to expect Jirachi to be some well-behaved pet. As usual, the legendary Pokemon has no care for human problems, and why should it? It was also enjoyable to watch the mythbusting surrounding Jirachi's wish-granting capabilities (he's actually just teleporting readily-existing shit from other places).

As for the 'How many Pokemon am I going to see in this movie to fill my Pokedex and brag about it to my friends?' question, it's a bit sparse until the last hour where we see plenty of different species (I was satisfied anyway) including a giant fake Groudon, Salamence and Absol. Oh and Flygon. HELL mudda-effin YEAH!

Look, this one actually rocked. If you like Pokemon, even just a small amount, Jirachi Wish Maker is definately worth watching (buy it right now if you're a big enough Pokemon fan).

(Remove two points if you don't like Pokemon, but I'm sure you'd still enjoy parts of it)