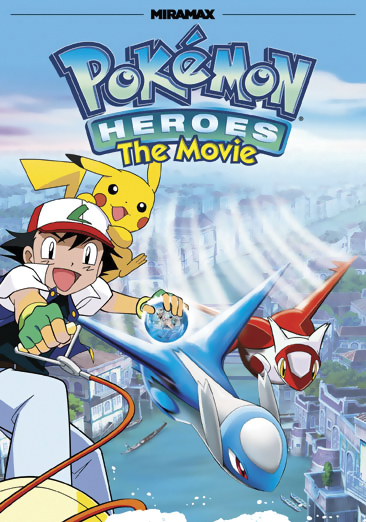 Okay, so I thought it was time to revisit Pokemon.

The 3rd Generation of Pokemon passed me by a little bit, as it was around that time that my age-group started to think they were too old for the franchise; started to think it was uncool. As much as I am ashamed not to own a copy of Sapphire, Ruby or Emerald, I never really liked the Pokemon introduced within that generation anyway, so perhaps I saved myself from disappointment. I did get the Gen 4 and Gen 5 games though; I'm back in the loop these days.

The films are different. They rarely follow the strict rules and regulations of the RPG Pokemon universe, and offer absolutely no help to fans new to the franchise. It's really only hardcore fans who watch these films, which makes the first point all the more annoying!

Pokemon Heroes isn't much of a mould-breaker: the bad guys (members of Team Rocket in the dub, just plain assholes in the sub) attempt to abuse the powers of two legendary Pokemon (Latias and Latios), whilst Ashachu, Brock and Misty have to try and stop them. All set in Venice. All without a single Pokemon battle.

The animation is a mess. Trying to blend cheap CGI with the cheap animation of the TV series lead to what felt like two unrelated films crudely stitched together. Obviously, character designs have always been Pokemon's saving grace. A cosplayer's dream.

The soundtrack was okay really, no complaints about the music (even if the song lyrics are woeful) or the SFX. The dub was just as you'd expect.

Ash, Pikachu, Misty and Brock are as fun as ever. I've never disliked these characters. Team Rocket are just there to (just) provide a laugh or two. How many times can Wobbuffet make me chuckle? Every time, it seems. There weren't many Pokemon to see here, beyond the few wild ones (it's always fun pointing them out, having a who-knows-the-most contest). In fact there's only one instance I can remember where a Pokemon even engages in battle and that's when Pikachu getting tackled by Latios, and they became friends within a couple of seconds! Always nice to see an Ariados though. Even though it was trained by a bad guy and did some nasty things to humans.

It's all enjoyable if you're already a strong enough Pokemon fan to forgive the massive weaknesses Heroes has. An average anime fan, however, will struggle to find anything to like or interest them.

Onto the next one I can find!

(Safely remove up to two points if Pokemon isn't your thing. Add another if you're the most diehard Pokemon fan ever, but it still wouldn't be the best film of the series)