Pokemon Movie 21: The Power of Us - Reviews 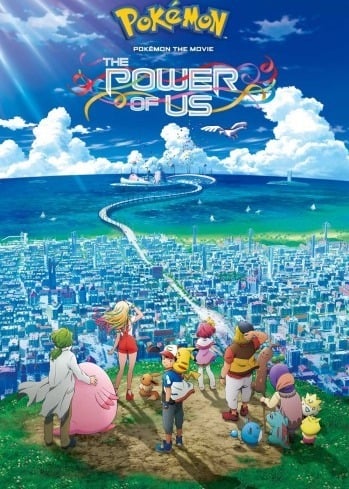 I’m going to start with a bit of a disclaimer: I’m a dedicated Ash, Brock & Misty fan and don’t watch much Pokémon that doesn’t feature the three of them. What I do watch are some of the movies and in my opinion this was one of the better ones not featuring the origianal trio. Not only did the movie bring back Lugia, it also provided a different outlook for the Pokémon. Rather than being the target of a collector, it’s viewed as a guardian - much like Latias and Latio from the 5th movie - loved and revered for its ability to bring wind to Fula city.

Team rocket's appearance is limited and the movie benefited from it. After 20+ movies and I’m not even sure how many reincarnations of Ash’s battles with them [series-wise], losing and being blasted off time and time again, their cameo appearance was like frosting on the cake. Having poachers, character self-destruction, and past actions others have to pay for as the triad of villianness was a great choice. The nostalgia for Jessie, James, and Meowth will remain but having them be the main obstacle each and every time [man it’s been 2 decades] can get stale.

While the story did take place in pretty much one location (as most of the movies have done) it explored the lives of other people in a way that I haven’t seen outside of the series [Indigo League and Orange Islands - my goto rewatch eps]. The pacing of the troubles/problems and goals of each of the new characters gradually working towards accomplishing their respective objectives was well-thoughtout. Not having to travel all around and instead be able to tell a story in a fairly confined location helped avoid those annoying this is dragging on feelings and those what just happened thoughts from time/scene jumps.

To me the most refreshing thing about this movie was that Ash is not the only main character, in fact the opening is about a character (with perhaps the most fanatical hair ever) who doesn’t have any interest in Pokémon. She sets out to capture one because her brother asked her to, not because it’s been her long time dream or even because she’s bored. No plans to be a tamer, breeder, or even a traveler, her entire goal is to make her little brother happy. Such sweetness and selfishness, especially considering her exceptionnally poor knowledge of Pokémon was a great hook that kept me watching till the end.

Even after Ash makes his appearance he doesn’t take over the story nor does he appear in pretty much every shot. New characters get to shine and Ash is there to help them with their troubles [like being bullied, looking in the wrong place for an Eevee etc.] in a quick and effective way. No lingering on how he’s the star; other people get a turn in the spotlight. Ash doesn't show up to save an entire town with existing traveling companions (aside from Pikachu) nor does he try and recruit any, he simply does what is right by helping out people and a town in need. Gaining friends is just a side benefit. No matter what style he's drawn in Ash will always be Ash and I say again, this was one of the better Pokémon movies for pulling back and not having him be the main focus.

This is not the 1990s Pokémon and it's not trying to be and that's great.

Alright, I really could keep typing but I think if I keep going I’ll start giving spoilers so I’ll just leave this review with this next last sentence.

While I personally saw some deep connections between the plot of Heroes and The Power of Us,  you’ll have to watch for yourself.