Pokemon Movie 20: I Choose You! - Reviews 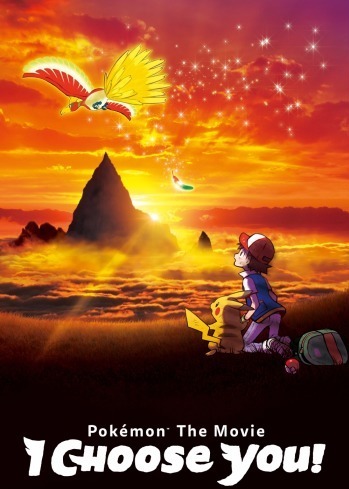 I know a lot of people are saying this isn't a good movie, but if you are a Pokemon fan it is definatly worth the watch. it introduces new charqacters and a different approach to the storyline that I find refreshing. It made me cry like the first movie and I can see myself watching this over again!

It's Been 20 damn years for the 20th movie of pokemon, I always see all pokemon movies except 4 of them have not see.

The plot of the story is about 10 year old boy name Ash Ketchum who want to be a Pokemon master and traval all over the world to catch some Pokemon for him,and his best Pokemon partner Pikachu as they traval together to battle opponents, I kind like of the story about the bond between Ash and Pikachu relationship is because how always get together, and Pikachu is a bigger one, I like the way he always battle with his attacks in his battle, that's I call him "little champ" as my nickname for me, despite the story was a little different to the original anime, but it's ok with a different story to the original, the story was fine to the background and the plot.

Tha Animation was brilliant! Nice animation background, nice collar and the design compare to the XY format, I like the way to the animation and how they made it right to the TV scene, great job of the Animation of the movie and how it looks compare to others, it is 100% perfect!

It's a great sound effect that the music to the movie was fine, but the only I'm not familiar is the remix of the Pokemon Theme is not I'm familiar with, other sounds of music was ok, but it a good was to make it, I wish they can make with the movie soundtrack song that would be great.

The Charaters from Poekmon was ok, but they are new charaters from the movie besides Ash and Pikachu and of coarse Delia Ketchum and professor Oak, they are Sorrel a boy from Veilstone City in Sinnoh region, he owns his Lucario, Sorrel wants to become a Pokemon professor to analyze about Pokemon, and their is Verity a young girl from Twinleaf Town also from Sinnoh, Verity owns a Piplup a water Pokemon (a Pokemon I hate although not compare to Dawn's Piplup, he is a Dumbass) she has a little problem with her backstory of her despite sha has a little scatterbrain, Verity is know to be the daughter of the Sinnoh league Champion Cynthia OMG I did't know Cynthia had a daughter, but anyways those new characters are ok and fine of their backstory for them, both of them are a good Trainers for me, overall the new characters are ok with Ash.

The conclusion of "I Chouse You" was a great movie for the 20th anniversary of Pokemon of the retell story of Pokemon was absolutely fine of the anniversary, it always brings memories of Pokemon, I like the way how Pokemon can make every year of the movies they make, but in the upcoming movie in 2018 will be another retell (maybe) but overall this movie will never forget the remember of the anniversary, the movie was great so far.

I watched this one with not ever seen a Pokemon movie, series or special. So now that I have finished it, I can say it was a good watch. It had a straight forward plot and later I found out was a mash up origin movie or sorts. Even with it being an origin story though I did like how the story moved along and finished.

Animation was good, very nice battles scenes and when it came to mood changes, it was shown very well in dark and light tones and/or shadowing for those particular moods. Sound was great. In story music was very crisp and clear, the opening and ending themes were good as well. Now I can see how the Pokemon songs can be catchy.

Characters were ok. I gave it a half rating because there wasn't enough background I thought on Ash's friends. Even if this wasn't a full origin movie I would have still liked to know who he was traveling with. So think more background info would've been good.

Overall I did like watching this, even if I don't see another Pokemon anime, I still think this is a good one to watch.

I am now 26 and got into Pokemon at age 9. This is a plotline I have been waiting years for. Adult Pokemon fans won't be disappointed. Even though season 1 is pretty much thrown down the drain I Choose You makes Ash's journey less kiddie with some scenes that are pretty heavy and dark for Pokemon. It was also refreshing to see Ash more mature (even though he's 10) and not so much of a "noob" like he always seems to be. Overall what I appreciate most is this movie will be appreciated by the younger generation and the older. My main dislike is that the movie doesn't stay clear on where Ash and his friends are. With the array of Pokemon you see it's hard to tell what region he is in (I'm going to guess Johto due to legendary lure).

i loved the trailer and the movie will be amazing