Pokemon Movie 2: The Power of One - Reviews 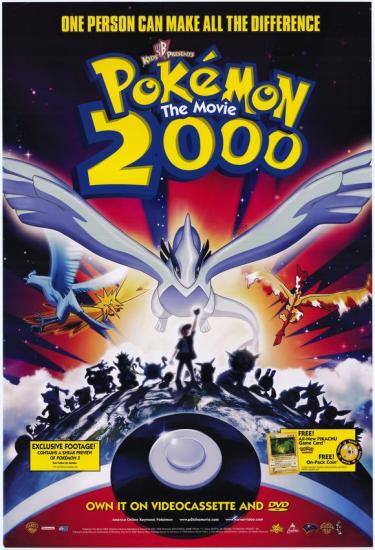 This is, by far, my favorite amongst all of the Pokemon movies I've seen.  I saw it when it first came out, then later on got to see the Japanese version.  It's the only one I can watch over and over again and not get bored of, but let's take it step by step.

The quick ratings are animation and sound...

Not a lot of repeated footage, the battling between the three legendary birds not stretched to the point of breaking...yep, near full marks for that.  Animation was great.

Sound?  Very close to the original Japanese version.  Even without seeing the Jap version, I'd give it a good rating.  There are minor changes in the audio and music between the versions, but not nearly as much as what the first movie had.

The entire story revolves around a legend or prophecy telling of a time when a pokemon trainer would be needed to save the world.

It was something celebrated on the island where the protagonists found themselves at (Ash, Misty, and Tracy), and they learned about it via a festival.  It was tradition to honor it and have someone make a journey around the three islands for fun, but "fun" soon turned "real" as some moronic pokemon collector decided to capture the legendary pokemon to draw out Lugia.

The entire prophecy is interesting, and the story starting out as something "fun" and turning from "practice run" to the "real deal" makes it even more exciting.

For its time (when this movie came out), the plot wasn't overly cliche at that point, and was done tastefully enough that what was a little cliche turned out not to be bad.

The proper parts were in the proper order, and the movie flowed with lulls that weren't too uneventful and action scenes that weren't packed too tight or drawn out too far.

Excellent around the board.  One new human character is introduced, and since I believe this movie came out before the ones featuring a Lugia and her child, it also introduced the character of Lugia (and another pokemon).

Of course, those that played the video games already knew of the pokemon featured in the movie, but seeing them given personalities (particularly in Lugia's case) is a nice touch.

Let's start with the human aspect; the main new human character introduced is dubbed as Melody; a girl that lives on the island and doesn't quite seem to take the legends seriously until it all starts to get real.  She is the pivitol character in the movie, as her ability to play an ocarina-type instrument with Lugia's song becomes necessary later on.

Her character grows in personality, and it's amusing that she forms a crush on Ash (and teases Misty about the relationship between her and Ash as well).  Very well done in the human character department.

For pokemon characters, Lugia's personality made me feel sorry for catching it my first time playing the video game.  A legend that should stay a legend...Lugia is very self-sacrificing and understanding, as well as helpful.

The other pokemon character introduced is Slowking, a pokemon that seems to just observe everything, though he somewhat directs Ash in what to do with the three treasures.  Though he seems very relaxed about the entire situation, there's something intriguing about his character (maybe it's precisely because of how calmly he watches the destruction).

Ash is always jumping into things, so it was nice to see him hesitate for a change; he was in over his head, supposed to cross a battlefield of legendary pokemon fighting one another, and he's only 10 years old...if he hadn't hesitated, I would have been disappointed.  But, he showed great character and strength in both hesitating and then pushing past his fears.

Misty played support in this, though she spent a lot of the movie arguing with Melody.  She had her moment in the spotlight when she had to save Ash, and finally realized where she fit into everything (and said something along those lines to Melody).

Team Rocket also played a pivitol role in this.  I have to say, I'm a huge fan of seeing them do good things or team up with "team twerp", so when they were the reason Ash was able to get to the last island due to their ability to think outside the box, I actually cheered and clapped from my seat.

Then, there was what they did later on...it turned out alright, but at the time, it was really amazing of them to do it.  They weren't doing it to capture any pokemon, as unlike the collector (the main antagonist), even they knew what was at stake.

Professor Oak and Ash's mother make an appearance in this, and it just warms me to see how much faith Ash's mother has in him.

I had to knock a little off the score of this, however, because Tracy was there and did almost nothing.  I'm not a fan of his character (as I prefer Brock over him), but he was still there in the movie.

I've seen 10 of the 15 pokemon movies at the time of writing this review; I saw the first movie in theaters when it first came out, and every movie after that until about movie 6 or so (and am now playing "catch up").

Out of the 10 movies I've seen, this is my personal favorite and the one I consider to be the best.  It had its ups, it had its downs...it had its hopeful and hopeless moments, and it had character growth (for the main characters).  The protagonists were proactive the entire time, and the phenomenon of the pokemon all congregating was even done in a way that wasn't boring or dull to watch.

Either in English or Japanese, I could watch this over and over again.  I lean a little more towards the Japanese version only because I'm a fan of a couple of the voice actors.  Though the names were changed, it's nice to see that the script was followed and the characters and voices were matched as best as possible; even the emotion was matched in the English dub, and that's something that seems to be a difficult thing judging by the dubs I've seen.

I highly recommend this to Pokemon fans, new or old.

Story: As Ash and his friends are off on the road again they encounter quite an array of legendry beasts.  On top of that there is an evil male collector of Pokemon that threatens to disrupt the balance of the world by capturing three of the legendary creatures: Moltres, the titan of fire; Zapdos, the titan of lightning; and Articuno, the titan of ice.  Ash and his fellow friends need to find a way to free the creatures and bring order back to the world. 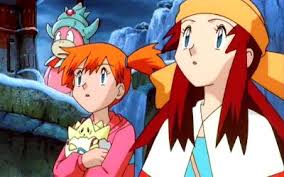 Animation: The animation follow of the movie follows the same path as the previous Pokemon franchise.  There is a more cartoony feeling fit more for children than a serious show. 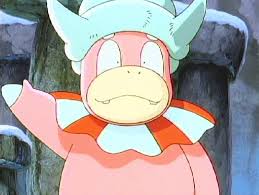 Sound: The sound quality was a little poor for my tastes (I was watching a dubbed version though).

Characters: The characters were fun filled and very family oriented.  Their own separate personalities were not very developed however, it was just a short movie and a majority of the characters have been developed in other sections in the series. 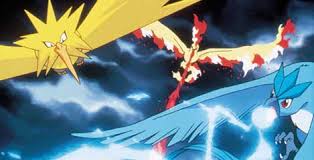 Overall: The story fit right in for a young kid or a person trying to find some childhood memories.