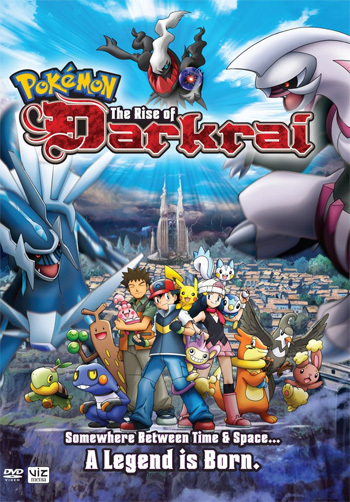 lol but seriously it was reeeeeeeaaaalllllyyyy good :DDD though im not sure if thats cause of how good it was, or that it just farrrrr and way passed my expectiations of it - which actually were pretty low, lol i bought it on dvd about 2 months ago *because it was on special* and then only just decided to watch it last night as a break from uni/tafe assingments and then i was just blown away with how much better it was than i ever thought!

so yeah with all that out of the way, the start's kinda trippy with like palkia and dialga fighting in some other distorted dark dimension, and then that was cut with ash and his friends getting lost...by brocks excellent navagation skills!!!! :D

then they meet the local airballonist girl, alice, who gets them to town and shows them around and stuff... and darkrai appears......and then well the rest is spoilers lol

though maybe one small one...which invloves one of the charachters transforming into a lipplickey!!! looool!!!!

but yeah also so many awesome songs!!!! but at the risk of over-linking  ill just add this one - the mega epic ending song "il'l always remember you"

sooooo good!!! :D and on this note i shall say i was never really good at reviews lol  (well at least non spoiler reviews) and having to get back to assingments/time restrictions, but this movie is a definate must watch!!!! :D watching it again tonight!!!!! :D

The ending and beginning of this movie are so memorable that I have not forgotten them for years. This is definitely one of my favourite movies of all time, to this day (number 3). I have cried 9 times out of the ten that i hear the song, and I've never not cried at the ending of the movie. Most people cannot get attached as easily to movies and anime, but i felt a strong connection and relation to the situation of death while the observer makes a sacrifice, something that i aspire to make in the same situation. There really was no flaw to this movie, other than it really doesn't have much to say against it. Dumb characters are the only reason why some may hate it, but there really aren't that many and for the ones that are there, they end up sleeping for the rest of the movie.

Let me try to summarize this...out of all the pokemon movies I've seen, this is by far the worst (though, I have yet to see 11-15, so that might change).

Overall, the sound was good, except that the main song the story revolved around (in the dub, at least; perhaps it sounded better in the original, as the dubbers tend to change the soundtracks at times) didn't have an emotional depth to it, and the voice acting was jarring and lackluster in terms of emotion.  Hence, the poor rating on sound.

I'll break the rest down onto three parts:

Your generic, world is in danger plot that seems to come with almost every Pokemon movie in existance, but here's the issue:  We're introduced to three new characters that I suppose should have played major roles in the story. They did, but only to introduce the story's plot.

Two legendary pokemon fighting, and a mysterious third pokemon that somehow knows about the fights and is able to cross dimensions or something.

The entire movie was pretty much wrong-turns and the town thinking that Darkrai was the cause of everything, though the audience knew that it was Dialga and Palkia that were the cause of the strange events in the town.

If we had seen the story without that third-party knowledge, fumbling around "in the dark", so to speak, it might have been a little more interesting.

Instead, the first 3/4 of the movie is everyone thinking Darkrai is responsible while we know it's not, and the final 1% of the movie are the protagonists actually DOING something about it and taking a proactive role in the entire thing; they had the backseat to the ongoing fighting between Dialga and Palkia that we were constantly shown to the point of redundancy.

It took the movie so long to get to the final point, and even to the revelation of Darkrai's true nature and what it's doing there, that I couldn't even get emotionally into what happened during the battle, and just sat there trying not to fast-forward the movie to get past Dialga and Palkia fighting one another and see the protagonists actually DO something instead of just stand there helplessly.

In short, the movie could have, and should have, been a lot shorter and taken less time to get to the main point instead of beating around the bush and drawing it out (to the point of even losing the suspense; yes, it's possible to draw something out so far that the suspense is lost, and this movie proves it) with the fights.

We were introduced to three new human characters and three new Pokemon characters.  The humans had an interesting relationship at first, but then it started to fall flat very quickly in terms of the love triangle between the Baron, Tonio, and Alice.

A lot of the research Tonio did was interesting, but again just served to draw the story out, particularly as he had to repeat things to the protagonists since he discovered the information by himself most of the time.  His character was probably the most developed of the humans, and even he felt a little flat; perhaps that was due to the dubbing, I don't know.

Alice seemed to be courageous, but also still felt flat.  Again, that could have been to the dubbing, as I just couldn't get into any emotional scenes she was a part of.  Every time she looked up and shouted at Dialga and Palkia to stop fighting, I nearly facepalmed.  Yea...cause that's really going to work!

Team Rocket made a short appearance, but didn't really do much of anything except be cameo characters in here.

As for the "protagonists"...well, they really didn't actually DO anything until the very end.  They were mostly observing or getting on board with the mistaken belief that Darkrai was behind everything.  They just stood by and watched almost everything happen until the way to sooth Dialga and Palkia was revealed and then Ash and Dawn FINALLY did something (along with Alice and Tonio, while Brock helped evacuate the rest of the town).

The most developed character was Darkrai, and there are still a lot of questions I have about that one (which I'm not going to go into here, as they contain a lot of spoilers).  Darkrai was the true hero and main character of the movie, not the main protagonists we're used to (Ash, Dawn, and Brock).  However, though it was an anti-hero type protagonist, and had a backstory and all, the backstory was lacking and it was hard to get into Darkrai's character.

Waste of funds and time.  If you're a diehard Pokemon fan, and are bored and don't know what to do with your time, take a look at it.  Otherwise, my suggestion is to steer clear.

A lot of the recent movies (6+) have been dealing with more drama than action most of the time, which is fine if it's done right...but this one has too much drama to the point that it feels like stalling, and the drama isn't even engaging enough to keep the viewer interested (in my case, at least; others seem to have liked this movie).

I was disappointed that Ash didn't get to do much, as he played such a pivitol role in some of the other movies. I was also disappointed that there wasn't more backstory to Darkrai to fill in the gaps that were made with the presented backstory, since it was obviously supposed to be the anti-hero of the story.

This movie just couldn't engage me on any level. I've been disappointed by anime movies before, but this one was really a let down.  There was too much focus on the pointless fighting between Dialga and Palkia (which felt like it was only there to draw out the story once we were aware of them fighting, which is the reason I knocked points off the animation; repetativeness) and not enough on the cause of the fighting and what was being done to stop it (until the final leg of the movie, at least).

Much improvement needed for this movie.