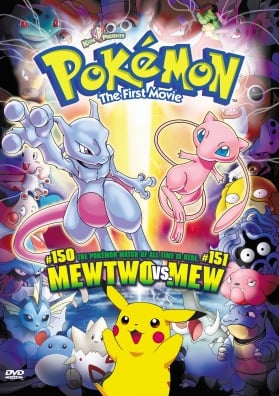 Story: Aah Pokemon, a show that gets worse with every passing series, with every new episode something likeable about this anime is flushed down the toilet....Thankfully this film however, was made back in 1998 so was created at the time when Pokemon was almost a animated masterpiece- if only times were still like then *sigh*

The story of this film is actually more interesting than your typical Ash-meets-up-with-a-legendary-Pokemon-and-helps-it-get-freed-from-the-clutches-of-serveral-greedy-organisations film. This story is about Ash getting invited to an island where all the top Pokemon trainers are and fighting the ultimate Pokemon: Mewtwo.

This movie is actually very interesting, for the first time Team Rocket weren't the ones right behind all the problems going on- they just stumbled along by accident. An actual Pokemon being a bad guy with extremely strong strength was an interesting plot-line also.

The ending of this film I actually found quite touching, it was sweet and there wasn't too much over-the-top fighting between the Pokemon what went on for eons and eons.

Animation: For 1998 this animation was very good- the battle scenecs were creative, but I found the characters in particular, especially towards the end of the film, looking very well animated- better than some of the animes I've seen from around 2005 or something.

Sound: During the touching parts of this anime, the music was very bitterweet and throughout the action sequences it was very strong and exciting. Music in Pokemon Movie 1 is very good.

Characters: Probably one of the best things about this film is the fact that it has Ash, Misty and Brock in it- the best set of protagonists from any anime. Ash brought the typical strong, stubborn facet to the team; Misty brought the caring and sweet part to the team and Brock brought the logic (and pervertedness)

Mewtwo's character was also unique, his cruel one-sided way of looking at things made him seem a ruthless Pokemon and at times I saw him as a human and totally forgot he was a Pokemon, which I found a good thing.

Overall: Probably one of my favourite Pokemon films, this one has a satisfying blend of action and deep moments in it. I suggest watching this film, because this may be one of the only films ever of Pokemon that is actually GOOD.

Story: The story is actually interesting. A scientist genetically clones a Pokemon named Mewtwo from another Pokemon named Mew. Mewtwo then starts to question its existence and destroys the lab where it was created. For some reason Mewtwo sends invitations to a bunch of trainers to take part in its challenge. Ash, Misty and Brock take part in its challenge where they soon find out about Mewtwo's evil plan.

Animation: The animation is ok. It not good but its not bad. In 1998 I bet the animation was very good for its time.

Sound: The music in this movie was ok. Really, there's nothing really notable about the music.

Characters: I really enjoyed the characters in this movie. Like in the Anime the characters are Ash, Misty and Brock. But I found Team Rocket (Jessie, James and Meowth) really made the Movie.

Overall:This movie talks about some dark topics for a Pokemon movie such as is it ok to clone Pokemon and force them to fight? For a Pokemon Movie its some what dark and as a kid I just watched it for the cool fight scenes. I don't think kids would really understand any of the messages. The two only major issues I had with this Movie is how much it contradicts itself, Pokemon is all about capturing monster and forcing them to fight each other. This Movie clearly says don't force Pokemon fight each other but in the anime it says its ok to. It ends with Ash and his friends learning a lesson then Mewtwo flys off wiping everyone's memory. By doing that, this makes the whole movie meaningless. Overall I recommend this Movie to any Pokemon fan!

Get some tissues and prepare to cry as it's emotionally very moving, and for what some call a kids' film, suprisingly dark. Not that this is a bad thing; it adds a whole new level of depth to the franchise and Pokémon world, especially at what was such an early stage in the series at time of release. There are ups and downs, as well as emotions changing at a fast pace. I think the ending is a bit weak, but it doesn't detract from the story particularly.

Some may call the art and animation of this film outdated. I disagree however, as I believe that the style of this film has the charm that drew so many into enjoying anime in the first place. The film's animation is comparatively higher quality than the TV show, and that gives it an extra level of special.

The music of this film is hands down the best part of it. The way they use the TV show's OP in the film is excellent, and the emotions conveyed in the music caused tears at more than one occasion. The only criticism is that at certain points, some of the music/sound is excessively loud and it lessens the immersion slightly.

It's broadly said that Pokémon films don't really know what to do with their supporting cast. This holds true in this film, but it isn't true of Mewtwo. His character development is excellent and authentic, as well as the scenes with the Meowths, or when Mew saves Ash both reflecting the conceptions of the characters that the film has built, and the overarching message of tolerance and friendship that the franchise is known for.

I would be lying if I said this was an outstanding piece of cinema that all would love. But if you've ever liked Pokémon, put this on, and I'm fairly sure you'll enjoy it.

Growing up, Pokemon was paramount to my life. If I had a good week at school, I was allowed to watch one of the first 3 Pokemon movies during the weekend. As such, Pokemon the First Movie has a lot of nostalgia for me. But now, 22 years after its release, I decided to rewatch to see how it stood up to the test of time. As such I will be talking about how it affected me as a child and if that still holds true after this rewatch.

*This review goes over the complete version of the English dub, including the previously cut scene from the western VHS releases*

Story: The story of the first Pokemon movie goes over the origins and subsequent imminent destruction of the legendary Pokemon Mewtwo. As a child, Mewtwo was a scary and powerful foe for our protagonists to go against, and I really worried if they were going to prevail. What I didn't have as a kid was the now avaliable addition of Mewtwo bonding with Amber Two and the copies of the Kanto starters in his early time as an experiment. If I had that cut content back in 1999 I feel like I would have sympathized with Mewtwo more. It would have even made his first copies, the final evolutions of the starters, more emotional. Despite Mewtwo losing those memories, there is now a compelling reason why he chose those Pokemon. I'm not sure which mentality is better for a child to have, to pity or to fear the main villain before they have their change of heart. Regardless, the extended cut is the way I would recommend for new viewers to see the film. It only enhances and produces a stronger reason for Mewtwo to snap at the end of his tests, defy being owned by a human, and in the end change back to good and disappear with his fellow clones.

Animation: The animation back in 1999 definitely looks dated to our 2020's expectations for anime. But, even with the older animation I can remember thinking it looked so much clearer than the main series. Because of its theatrical release, it got to pull in darker settings and beautiful special effects. Most of the time the battles are clean as well. Some of the fighting scenes however can look a little off, specifically the montages of the slow-mo clone battles, which is why I don't give it anywhere near a perfect score.

Sound: The strongest positive for the sound I can give the movie is the song "Brother, My Brother" during the climactic battle. As a kid it was just a track to groove to, but as an adult actually listening to the lyrics, it really hit harder. The rest of the soundtrack is very acceptable, nothing out of character for pokemon to have in my opinion.

Characters: Mewtwo, our antagonist, cannot be described as just jaded or pessimistic, he downright loathes humanity. It really ups the stakes. Pokemon is no stranger to potentially killing off Ash for a one shot episode with ghosts, or having him worry about being stranded in the frozen tundra and freezing to death with his companions, but to have the villian want to exterminate all humans is darker than ever before. Getting to see the movie even link up to the original series, where we see Gary, the biggest pain in Ash's journey, take on the Vermillion gym - and Mewtwo by extension - was a thrill to notice as a kid. They really took the initiative to make Mewtwo a threat even before you might have seen the movie, if kids were paying a good amount of attention.
The rest of the cast is just in their element as themselves. Ash, Misty, and Brock hold their own in the movie and stand strong throughout. The new trainers introduced are not fleshed out much, but their brazeness to battle such a powerful Pokemon to defend Earth is commendable.
And no review can be complete on a Pokemon movie without mentioning Team Rocket. Their silly antics and witty/zany dubbed lines gives so much levity to the movie where everyone else doesn't have the luxury of getting to be comedic. Team Rocket made the original series greater than it would have been if they were absent and the movie is the same way.

Overall: My enjoyment of the film has not faded away despite the literal decades from first viewing until now. Sure, the movie isn't geared towards me anymore, but there is still enough for me to get fron viewing it as an adult that I can still justify rewatches or recommending it to others who have yet to see it. I know that the community in general feels that the movies only declined after this point but that only speaks to the quality of what this project offers.

Not great, after school special-y. I can't imagine anyone who would watch this without watching the show. If you have watched the show then it is more of the same. Just one big episode really.

Very similar to the show, violence done in a way as to not offend anyone.

Same as the show. Exactly the same, just a feature length episode really to get more money.

Just O.K. It is like reviewing a single episode of the show. If you have watched the show then you can guess what is going to happen. Likewise the converse is true.