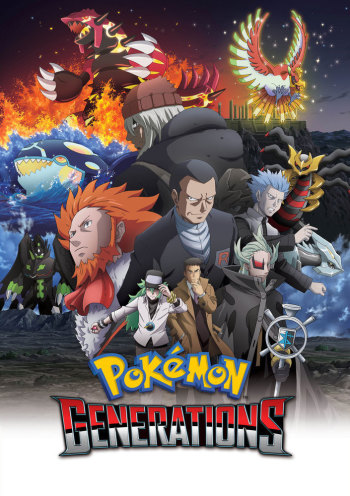 Could be great if red replace Ash, the only bad thing the episode are too short but quality characters, sounds are mostly perfect and very nostalgic compare to the failured sun and moon anime with  an humillated ash

Pokémon Generations is a collection of short vignettes from the stories of the Pokémon games. Each episode is a few minutes long, they give no background to what's happening, and they tend to not resolve whatever little stories they're presenting.

If you've played the games, you'll recognize what the episodes are about, but you'll also have already experienced them in a way that makes more sense.

If you haven't played most of the Pokémon games, this series won't deliver anything intelligible or worthwhile because it relies on you understanding the context and significance of the scenes without providing them on its own.

The content of the episodes is too specific and contextless to act as a recap or introduction, and the series doesn't provide further depth to the games' world or characters, rather it just spoils specific moments in their stories, so I fail to see the point in this series unless you're desperate to see random scenes of the games in animated format.

Almost the perfect pokemon anime for me. The music and dubbing is amazing to say the least and the animation is wonky like the new sun and moon looks. The only problem i have with this is that the episodes are just too darn short.

Pokemon Generations is a mini series full of short stories based off the Pokemon Video Game franchise. Its first episode released on September 16, 2016 and its last episode released December 23, 2016. The series is 18 episodes long.

If you've played the games before, you already know everything about the show. Each Pokemon generation is given three episodes, apart from Kanto, which has two. One thing to note is that the episodes are not your standard anime episode length. They're really short, even for a short story, which is unfortunate.

As to be expected with the majority of Pokemon related animation, the script is incredibly basic and bland. Everyone always says what's on their mind or whatever is happening onscreen. Then again, if you're watching the show, you're probably already a fan of the games or you're here for the fight scenes, which live up to the hype!

This show has some stunning scenes; the fight between Deoxys and Rayquaza was a personal favourite! Nice animation tends to be something you'd expect to find in any Pokemon related animation. It's something they're very good at. I believe the animation was done by OLM Studio. Some of their other notable work includes a bunch of Pokemon movies, the Yo-Kai Watch series and movies, Berserk (1997), Inazuma Eleven and Komi Can't Communicate.

The inclusion of some remixed game themes for the music was nice, although the music itself wasn't anything too crazy. The dubbing for Pokemon Generations is like the script, it's rather basic. I've not seen enough of the other work done by the Voice Actors, so I'm not too sure if this is what their work is like normally. The characters in the show seem to be true to their game counterparts, so if you liked them in the games, you'll like them here.

Overall, Pokemon Generations isn't a show you should expect much from. It's more like a novelty you can turn on and have play in the background every once in a while. There are other, better and more entertaining shows out there but it's still an enjoyable experience every now and again. You won't get much out of it though, as its short length and bland script and voice acting really hold back this interesting concept for a show.

Thanks for reading and I hope you found this helpful!