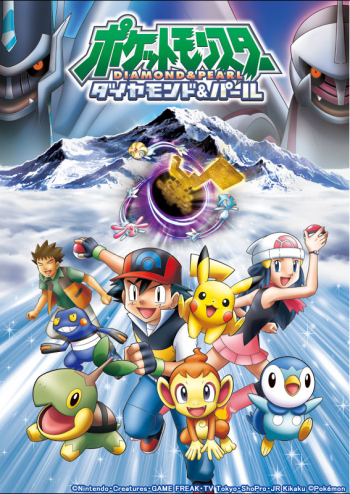 If any series has been done to death, Pokemon is usually one to come up. While I grew up watching the original Pokemon as a kid and have dabbed in Pokemon Advanced, I found myself wondering if anyone still likes the series for what it made its name for. I enjoyed Pokemon as a kid because it offered something I inspired; adventure. Ash as a main protagonist is not very appealing except for the fact that he never gives up and he can be too kind to others. That being said, someone told me that Diamond and Pearl is much different than the previous installments and that I should give it a try. So join me for a review that will help you figure out if Pokemon really needs to die.

Story: 7/10
So as I stated before Pokemon has been around for a very long time and with time comes boredom if not done correctly. Pokemon Diamond and Pearl like the other series takes place in a whole new region with different Pokemon monsters and a new addition to the cast. With returning characters Ash and Brock, we see our first new character, Dawn who I surprisingly take a liking to. Put the characters off to side for now, the story is structured very similarly to the previous installments. The main goal for Ash is to get all the gym badges and challenge the Pokemon League. Dawn provides us with her goal of become a top coordinator in the Pokemon Contests which I actually liked watching. There is one very annoying thing that Pokemon unfortunately carries with itself at the start of every series. Ash always becomes and seems very week even though he emerges from the previous season a very strong trainer and with Pikachu at an unparallelled power level. He for some reason always gets owned by someone in the beginning of every season (Gary and Paul in this case) and becomes very weak. Thank god he soon gets his balls back and starts on his journey with Dawn and Brock. I am going to skip over all the gym and contest stuff as they are somewhat the same from previous series. The story (as in what is affecting the Pokemon world as a whole) is actually interesting as the new "Bad Guys" are Team Galactic. Unlike Team Rocket they harm others and have truly evil goals. The Team Rocket trio return with their comic relieve that I am to be honest a little bored of. The overall conflict between Ash and company versus Team Galactic is interesting when it happens and it doesn't affect the overall pace of the show. There is also the back and forth battles between Paul (the new rival) and Ash which become interesting as it shows the drastic difference between the personalities of Paul and Ash. We see Paul change due to his time around Ash as well as become a better person.

Animation: 6/10
Although the animation has become better than the previous installments, it's still nothing to brag about. There are some beautiful scenes and spectacular battles but in some areas of the show its just barely passable. It's enough to keep you interested in the characters and the show but it won't pull over gorgeous scenes like in Final Fantasy: The Spirits Within. It does what it's supposed to do, get the point across and help progress the series.

*Reviewed watching the English Dub*
Sound is very important in the Pokemon series as each Pokemon has a distinctive cry and vocal mannerisms. The new Pokemon sound decent but some variations between different Pokemon of the same species would of been nice as every Pidgy sounds like every other Pidgy. The main characters are voiced by pretty good voice actors epically Dawn. The dialog matches the mood of the scenes quite well and provides a good experience.

Characters: 9/10
What has every Pokemon series done right especially in this series? The characters have always been spot on for Pokemon and it doesn't disappoint here. Ash is still rash and doesn't let up for any challenges. Brock is still his pervy self and when needed, provides help and inspiration. Dawn is a lot like Ash in the sense that she doesn't back down and conquers everything she faces. One reason why the characters had such an impact on me is because I started to noticed that there was a very strong connection between Ash and Dawn. Not so much in a romantic sense but in many scenes there are sparks between them that make for some amazing moments. Dawn and Ash work so well with each other that at the moment at the end of the series where Ash and Brock leave to go back to Kanto, I genuinely felt sad for Dawn. Out of all the main female leads for Pokemon, I had the strongest liking for Dawn (even more so than May). Where Dawn shines the most is the movies related to this series as the same connection you see in the show translate to the movies.

Overall: 7.3/10
So Pokemon has been going on FOREVER and all I see from people on various forums is that it needs to end soon. I haven't watched the newest season (biased off of the Black and White games) but what I can tell you about Diamond and Pearl is that it does not disappoint in the slightest. It keeps the same formula of 'gotta catch 'em all' while showing us some great character connection. The story between Ash and Team Galactic was interesting and fulfilling. Dawn surprises us with some spectacular character progression to become top coordinator while giving Ash some great memories. The series in some ways cuts back on the concept of battling and focuses on the relationship between the main characters. I cannot recommend Pokemon as a whole to everyone but I can without a doubt say that if you invest some time into this series, you might find yourself eating up your free time. This is one exciting, long, and fun to watch series that everyone should give a shot.

**To Pokemon Lovers: If you are craving a different take on Pokemon, I strongly encourage you start reading the manga Pokemon Adventures as it follows the games and has a very different view of the Pokemon Universe. The manga faithfully follow the games and at the moment has +500 chapters to enjoy.**

This is my review of Pokemon Diamond and Pearl...

Pokemon Diamond and Pearl is the 3rd Pokemon anime series and I find it very fun to watch. Animation wise, it's a big upgrade compared to the first two seasons.. It had great characters. The theme songs were okay. The development was great. And the battles were great. However, this is probably the most ignored season of them all because Pokemon started to lose viewers after the Advanced Generation. But this season was very good. I reccomend it to any Pokemon fans out there. What I really wanted to talk about was Dawn, because she seems to get alot of hate from the Pokemon fanbase. Well, I say to you Dawn haters, BACK OFF!! She's awesome, alright? And Paul was the perfect rival for Ash. He was very serious compared to the other rivals. As for Barry, he wasn't that good of a rival. But he was a comic relief, so I guess he did his job. And I just wanted to say, Ash, you're awesome. I really did love Ash and Dawn's relationship througout the series. I especially loved that High Five scene between them. But of course, this Pokemon series is still cheesy, like all the rest.