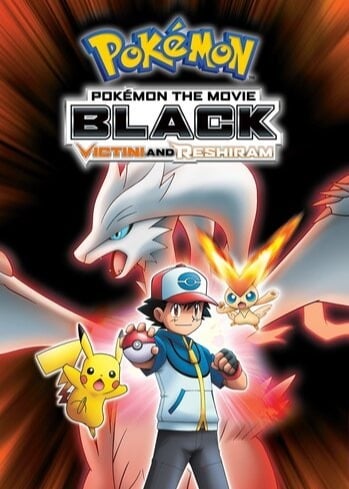 So for the MMMM (Monthly Marathon Movie May) I watched this movie because I haven't seen any pokémon movie in 1 year, this move is quite good (please also note that I also added this review for the other movie since they are almost the same)

Animation 8/10 - This score might be a bit high but in my opinion the animation was very good it had some fluent action scene's and there where some parts of CGI in it wich i'm not really a fan of BUT this CGI wasn't that bad and was done quite well. The special effects were also done nicely nothing special but they looked quite nice, and I love those pokemon designs they look very good.

Story 6.5/10 - Not the greatest story ever since I could already see what would happen though this is to be honest a kid/shounen movie and the story is most of the time not the best, also I quite like the fact that these movies do have a small "interaction" by choosing wich movie you watch first and both movie's change a few things it changes wich pokemon is being used and that's all

Sound 7.5/10 - The sound was quite a suprise since I did notice it, and it was quite good the fighting sounds were done great since the sucked you into the battle and made them quite exciting as well, the sound also did a good job on setting the mood in some scene's

Characters 6.5/10 - We have our pokémon cast which needs to introduce themselves to every person they met wich is quite annoying, we have our average shounen protaganist though this is one of the few I love, and the supporting cast was "meh" they didn't help the movie one bit but it was quite nice seeing them battle

Enjoyment 7/10 - Overall this movie made me have quite some nostalgia even if the movie was pertictable I had a great time watching it and the battles were quite exciting too, so if you are an old or new pokémon fan you'll surely enjoy this movie

thank you for reading and please leave a comment and feedback it'll help me out a lot.

just watched this today! and no reviews for it??hhhhhmmmmm ;) hmmm well havent watched any pokemon in a while but yeah was alright i guess....kinda followed the general plots of a few other pokemon movies in relation to the cute pokemon ash befriends vs the secondary legendary pokemon (usually bad) (see jirachi movie)

so yeah....and nothing from team rocket?!?!? like legit all we see of the gang is them talking about getting victini...but they actually do nothing....not even blast away! :( haha

so yeah....the more i think about it, pretty much a remake of the jirachi movie lol except with victini vs zekrom/ reshiham instead...very similar plots...

and yeah...thats about it i think...nothing really special about this one imo :( but at least get to see some of the "new" black and white pokemon...even though pokemon xy is now the newest haha