Pokemon: Black & White: Adventures in Unova and Beyond - Recommendations 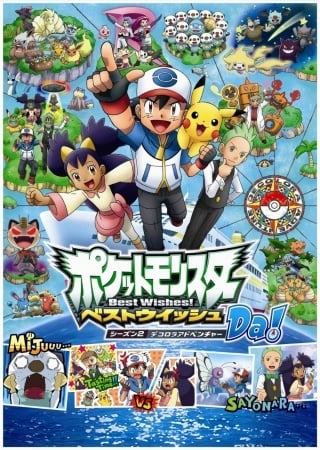 If you're looking for anime similar to Pokemon: Black & White: Adventures in Unova and Beyond, you might like these titles.

On the canal-laden island of Altomare, Ash, Misty and Brock are taking place in a fast and furious Pokemon race. Through a series of events, Ash and Pikachu run across a young girl in distress; or at least, they THINK she’s a girl. Quiet and docile, she is none other than a personification of Latias, one of the two protectors of the city. With powers beyond imagination, Latias (and co-protector Latios) are highly sought after by two women with a sinister agenda of their own. Ash, Misty and Brock must call upon their Pokemon once more and protect the protectors, all while helping to prevent the destruction of the island!

Pokemon Movie 2: The Power of One

In the Orange Islands, Moltres, the titan of fire; Zapdos, the titan of lightning; and Articuno, the titan of ice, maintain a delicate balance of power with nature. It is said that if that balance is disturbed, the legendary Pokemon Lugia will rise from the depths of the ocean to help keep the peace. It is this legend that calls a rare Pokemon hunter to the islands; he seeks to capture the titans – and thus, Lugia itself – and he will stop at nothing to do so. Meanwhile, Ash, Misty and Tracey have arrived at the islands and end up becoming mysteriously shipwrecked on Shambouti Island – a place where an annual festival honoring the titans has just begun. Ash accepts the role of the ceremonial "Chosen One" who will find three orbs to represent the harmony between the titans; but thanks to the battle that now rages in the skies, he soon discovers that the ceremony he must take part in will have very real ramifications!

The Team Rocket scientists attempted to make the most powerful Pokemon in existence and they succeeded. A clone made from Mew’s DNA, Mewtwo was enraged at his existence as nothing but a tool for fighting. In his anger, he destroyed the Team Rocket base and established a base in the middle of the ocean, inviting strong trainers to come and face his army of super clones. When Ash and company are invited to the island, Mewtwo’s intentions become clear and it’s up to them, the other trainers, and all the original Pokemon, including Mew, to stop him. The battle of Pokemon vs. clone begins!

Created in a lab to be the world’s strongest pokemon, Mewtwo is the only of his kind. With the help of Ash and friends, Mewtwo and the rest of the created pokemon managed to escape the clutches of Giovanni, Team Rocket’s leader, and set forth to find a place they could call their own. Now, Giovanni has managed to find Mewtwo and friends in a remote part of the Johto region, and Ash and the gang are caught right in the middle of the battle. All Mewtwo wants is to understand his purpose in life and live in peace; can Giovanni be stopped for good with the help of Ash, Misty, and Brock?