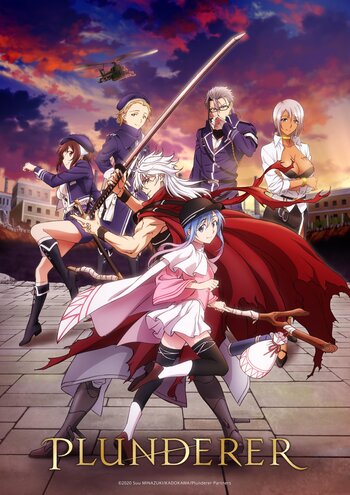 Trying to watch just two episodes of this one god-awful anime series made me facepalm so hard, my hand went into my brain and out the back. Since the creators put nigh zero effort into making this abomination, i'm going to return the favor with this review and just list off two quick points.

Behold. A Nodachi that's a good bit over this guy's height. Nothing too strange so far. 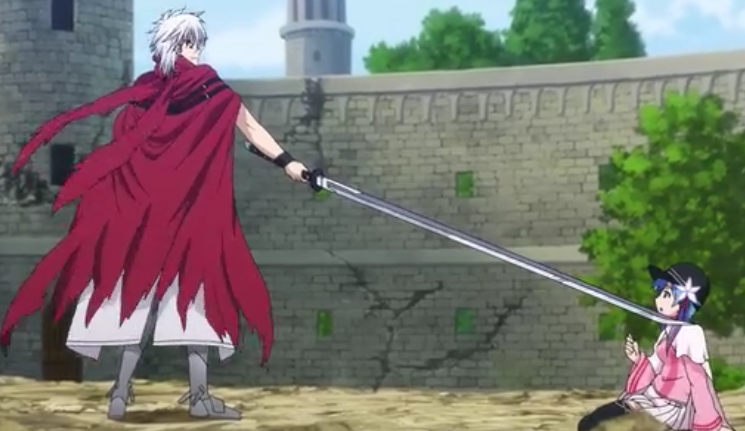 Here he is ripping it out of this stuffed animal from groin to head.. The sword should realistically be about half into the ground but whatever, it can be shrugged off as an angle thing. 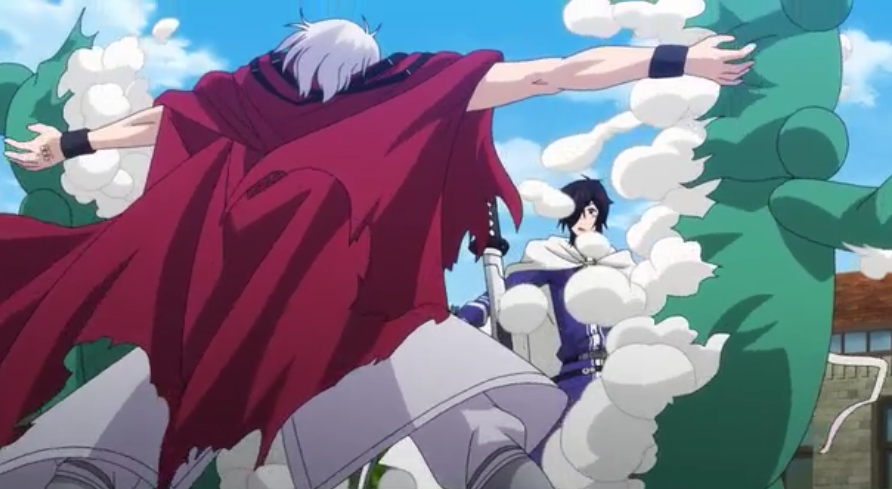 Here he is wearing the stuffed animal on his back as an accurate scale comparison in the very first few shots of the first episode.. Whoops: 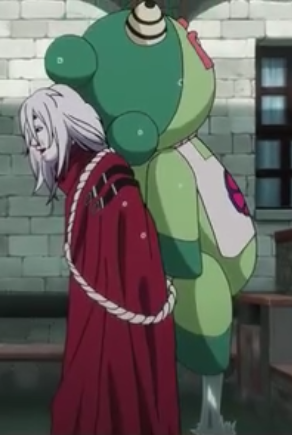 That is a little under 4 times around the Earth's diameter, ladies and gentlemen. In 5 years.

A trained athlete &/ marathon walker can do about 70-100 kliometers in a day if they really put their mind to it. The only thing that comes even remotely close to what this child has done in real life is a record set by George Meegan that walked less than half of that which took him 6.6 years. As a grown man.

He burned over 12 hiking shoes doing this and the part where the writers couldn't be bothered to do a 3 second google search to find out whether the random number they're cramming into the story & dialog is feasible or not is nothing short of insulting to both athletes around the world and to their viewers (that have an ounce of sense).

Please avoid this trash and consider downvoting it so others may be spared.

Ok so this anime does indeed start off pretty generic, we should all see the first 8 or so episodes as the exposition, as the show actually gets pretty dang deep.

STORY:The story is surprisingly complex with some depressing twist, and prepare yourself for Licht's and Nana's backstory. The story also sheds light on a major real world problem: Overpopulation. This leads to hunger,poverty, and eventually war, which is where Licht and Nana comes in. The discoveries we go through as we see these two backstories unfold are jaw dropping enough, but how these stories are told is the real magic. We find out how multiple traditions were created in this world and how the characters react to these events, which brings me to my next topic...

My one and only issue here is the rainbow vomit, it was one scene where they just made the vomit look like a puddle. Other than that it's fine with plenty of chibi kawaii scenes as well.

The dub is actually pretty decent.

Overall if you like mystery and sci fi with echhi shonen style dialog and action scenes this is a must watch.

The first couple episodes makes the watchers believe this'll be a nice 12 episode echhi anime, with a bit of action to keep you happy, like Hundred. But at around episode 5 you start questioning things just as Jail is doing. At episode 6 we question why can't they study flying and why dedicate an entire episode to it and 8 is where the real show Plunderer starts.

We see a helicopter in Alcia, this medival world....yea I know fishy. Episode 9 gets even more confusing as the Ace of Pursuit,Mizuki Sonohara appears. After she's 'defeated' we hear Nana say "those people drugged her". This makes things evev more confusing. Well 10 and 11 clears it up (not going to say how) and we're thrown into a modern world.

This is a weird anime. I've only seen 3 episodes, but it seems to be all over the place. The backstory (so far) is retarded. It's serious enough to have drama, but contains too much comedy to be emotional. The story of the show, especially the third episode, doesn't seem to have any meaning. Like, nothing is logical at all. I get the idea of ecchi, but this anime lacks any type of coherent story. It's sorta like a collection of funny RPG stories that loosely involve the main characters.

What throws me the most, is the Licht character. His count makes no sense. In fact, none of the counts make sense. The writers just up the count when they want to, completely ignoring logic. No, you know what, there are too many things to speak of that are wrong with this anime.

This is like the Family Guy equivalent of anime: fun to watch (sorta) but has no coherent story. I feel like I want to keep watching because the story concept is cool and I want to see where it goes... but I also know that the anime will disappoint me. I am torn. If this turns out to be another "Isekai Cheat Magician" level of bad, I may be sick.

TL/DR; weird stupid charm, lot's of sh*tty tropes, no story at all, but drawn and animated really well. I can't tell if I hate or like this anime. I feel like this anime was made deliberately to mess with viewers. If it is all a troll, then it's well done. If not, LOL, they f*cked up.

Update: I'm seeing EP 7 now and the animation quality took a nosedive. Just awful. Looks like this anime is a flop. Sadly, I cannot recommend this to anyone.

Update: Ugh, against my better judgement I watched EP 8. Most of the episode was bullshit and stupid. Just watch the first 5 minutes, then skip to the last 3 minutes and you won't miss anything. But the last few moments of episode renewed my interest enough to see another episode. I am apalled at myself for wanting to see more. But there it is. It has a strange pull.

I usually never leave reviews, especially bad ones because every person has its own taste. BUT THIS ANIME JUST DESERVES IT. The word for the whole of it is LAME. If you SOMEHOW manage to get through the first, like 10 episodes, no kidding, where it's annoying chara introduction or not even that but random episodes of inane plot and idiotic ecchi scenes, with very little world building, you suddenly get a plot twist and think, 'hey! maybe it was a jewel in disguise all along!'. And it looks like that for another 2 episodes maybe before it just keep being lame and boring. The world building is bland, the reasoning is too, the fights are so lame they hurt, and i'm supposed to believe a girl showing her boobs is a keypoint in the story too? I just don't even know how I got through all the episodes, this is something that I decided I had to get through at some point, and oh, the regret. Every episode was painful to watch. AND THE ENDING MAKES IT LOOK LIKE THERE'LL BE A SECOND SEASON?? Hell NAW. Save your time and avoid this anime like the plague. My only positive points about this anime might be the voice actors, which did a pretty decent job, and that the design is pleasing to the eye, but that's about it.