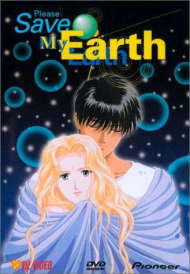 Remnants of a past life on the moon swirl in Alice's dreams after she overhears two of her classmates talking about mutual dreams they are having. Banding together, they set out in search of others who share these dreams, and for answers. All the while the pressing question is, do these memories of a past life determine the course of the present? 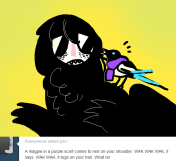 This is a horrible show. I do admit that I wave watched it purely for the hilariously bad and fairly cliché stuff in it, but I didn't think it would be this bad. >Spoiler warning. The story follows mainly Alice, a young and highly sensitive girl, and Rin, her kid neighbor. The title and first few happenings in the anime (humans are compared to the extinct dinosaurs, Alice complaining about the polluted air), might bring you to think that this is some series with a moral like "stop eating cows because they cause more air pollution than all cars together lol" but nope. In fact, the dinosaurs are briefly mentioned later again, but play no moral part in the anime. I don't believe there was in fact a moral. More teens are introduced, all having one thing in common, having "moon dreams", or dreaming of their person as they were aliens living on the moon (who incidentally looked exactly like humans). Some drama and hassle went down between their alien selves, affecting in ways their current selves and relationships, causing some crushing and loathing. Now I am not exactly a sucker for drama animes, love triangles, Only Six Faces, emotional girls and emotional boys, but I did watch the anime just for that. It was all there. And then it got worse. The story itself had potential, I will admit that the whole aliens' depressing tale of how they ended up on Earth after disaster after disaster could have been good. But the way it was presented, lack of certain things such as reoccuring factors and characters, interesting but simple and moreover logical dialogue, interesting characters with interesting stories made the whole story succumb to a shitty, meaningless series. I think what bothered me most was that it did not build up logically. It starts off with Alice meeting two classmates having the same dreams, then she has a dream too, then they're onto something, then another moon person with heart problems is introduced, he and his adult friend are hunted on while Alice and her classmates are mostly out of the picture, Rin plays a really big role, some drama is revealed, heart problems guy cries a multitude of times, a shitty action scene, totally serene and femine and in sync with nature Alice comes back in the picture, a past is revealed for over twenty minutes going into depths of a character we never even heard of and their cat, the show is concluded with showing some meaningless 10-second shots of the characters that had been ditched as important roles by the end of it all. There is no conclusion. The three hours you have wasted watching this hilariously crappy anime mean nothing. Somebody probably just thought this was great to put on their portofolio: "made a fully animated movie of three hours". Or who knows, maybe they just liked to draw crying kids. Then there's the characters. Alice is a very sensitive young girl who is absolutely selfless and devoted to pleasing the people around her, animals love her, she sings well, she gets pushed out of a battle ground because that's no place for fragile ladies and the first thing beaten up boys do when the fight's over is ask her if she's okay. Did I mention she talks to plants? She's the girly-girl. It is her. Haruhiku, beforementioned heart problems dude, is pathetic. He cries more than Kaiji (from Kaiji) and I'm pretty sure that at least a third of Please Save My Earth was the sound of him whimpering and screaming at people that they wouldn't understand. Sure, he's a good guy, and being beaten up constantly and frequently nearly drowning is unfortunate, but there is a certain point where being upset isn't even realistic anymore. Nearly every single one of the characters has a sob story past. Wether it is the loss of siblings, being an orphan, near-death experiences, taken in by the house of God, it is in there. Except for the guy above this bullet point, though. He just was sickly. All deaths that occured in the animation (with the exception of the moon people), were traffic accident victims. All of them. Oh, and by the way, that's also how two characters happened to meet. Traffic accidents are a quick and simple solution for things happening outside of the story, yes? There's shounen-ai in there but not really for a reason. Maybe because the chicks dig a gay character. But it has no plot significance whatsoever, and it doesn't come back later on even though a lot of screen time revolted around it. Oh, and it was made to be justified because one of them was actually a girl. Yep. Real classy right there. All the clever characters are shy/quiet, resulting in the ones actually saying things saying absolutely stupid things. Outragous. The dialogue they emit is meaningless. It is entirely possible to watch this repulsive show with your sound turned off and it would make just as much sense. More, maybe, because a lot of mindless and story-unrelated blabber would be cut out. The characters are really, very cliché. But against all the other poop from Please Save My Earth, it's not actually all that bad anymore. Which brings me to the conclusion that Please Save My Earth stinks. There were more most distasteful things about this series that I will spare you, seeing as the above seems enough to discourage anyone who isn't out there to laugh at ridiculous animu... Or to seriously cry over the emotional and sad characters of this thing. Because if that is your thing, I hope I didn't spoil too much of it for you.

Why you should watch Boku no Chikyuu wo Mamotte (Please Save My Earth) anime? / Zašto pogledati Boku no Chikyuu wo Mamotte (Please Save My Earth) anime? English language: This is one of the best anime I’ve watched. Personally, I didn’t expect anything special when I read the summary. Since it had 6 episodes I decided to watch it because I have another anime more that I watched. The story is initially about Alice Sakaguchi who, due to a misunderstanding, accidentally finds out that her classmates Jinpachi and Issei constantly have common dreams that are recurring dreams about a group of lunar-based scientists observing the Earth. When Alice has one of the "moon dreams", she will try to find other scientists together with Jinpachi and Issei because they are all reincarnations of those scientists who died of a mysterious disease on the moon. While that idea of theirs sounds great, things will get a little complicated. Namely, a character who is also one of the reincarnated scientists will hide his identity and negatively influence some events in his favor. That character is also a villain and he will manage to fool everyone. Supernatural powers will help him realize his plans. The powers of this character are so strong that even some people who have the same powers cannot defeat him so easily. Towards the end, we will find out the story of his past life, which is so tragic. Another problem that will be created is that the characters can’t cope with what happened in their past. They will begin to mix their present and past lives. There will be jealousy and revenge. Let’s just say it’s their personal struggle. All in all, this anime is about the characters and how they will interact after the events that led to their deaths come to light. The story is very intense and includes very tragic and touching events. This anime also has very interesting characters. What I liked most about this anime was that it was so interesting that I watched it without a break. I would recommend it to anyone to watch it. __________________________________________________________________________________________________ Hrvatski jezik: Ovo je jedan od najboljih animea koje sam pogledala. Osobno nisam ništa posebno očekivala kad sam pročitala sažetak. Pošto je imao 6 epizoda odlučila sam ga pogledat jer imat ću još jedan anime više koji sam pogledala.Priča se u početku radi o Alice Sakaguchi koja će zbog jednog nesporazuma slučajno saznati da njene kolege iz razreda Jinpachi i Issei stalno imaju zajedničke snove koji su ponavljajući snovi o skupini znanstvenika na mjesečevoj bazi koji promatraju Zemlju. Kada Alice bude imala jedan od “mjesečevih snova”, zajedno će sa Jinpachijem i Isseijem pokušati naći ostale znanstvenike jer su oni svi reinkarnacije od tih znanstvenika koji su umrli od misteriozne bolesti na Mjesecu. Iako ta njihova ideja zvuči super, stvari će se malo zakomplicirati. Naime, jedan lik koji je isto jedan od znanstvenika koji je reinkarniran, će skrivati svoj identitet i negativno utjecati na neke događaje u svoju korist. Taj lik je i negativac i sve će uspjeti zavarati. Nadnaravne moći će mu pomoći za ostvarenje svojih planova. Moći od toga lika su toliko snažne da čak i neki ljudi koji imaju iste moći ne mogu ga tako lako poraziti. Pred kraj ćemo saznati i priču o njegovom prošlom životu koja je tako tragična.Još jedan od problema koji će se stvoriti je da se likovi ne mogu nositi s onim što se dogodilo u njihovoj prošlosti. Počet će miješati svoje sadašnje i prošle živote. Doći će do ljubomore i osvete. Recimo samo da je to njihova osobna borba.Sve u svemu ovaj anime je o likovima i kako će oni međusobno djelovati nakon što događaji koji su doveli do njihove smrti izađu na vidjelo. Priča je vrlo intenzivna i uključuje vrlo tragične i dirljive događaje. Ovaj anime isto ima jako zanimljive likove. Kod ovoga animea mi se najviše svidjelo što je bio toliko zanimljiv da sam ga pogledala bez pauze. Preporučila bih ga svakom da ga pogleda.

interesting concept but not well executed... plus the ending was super rushed and unsatisfying. maybe their funding got cut. there were some lovable characters (rin's foster dad, issei) but the characterization wasn't that good. overall i enjoyed some parts but it probably isn't worth your time. I've heard that the manga is supposed to be better. it did have an enchanting feel and ED that was nice 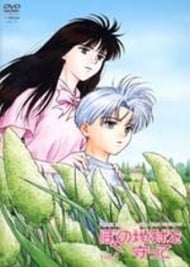 Please Save My Earth: The Passing of the Golden Age 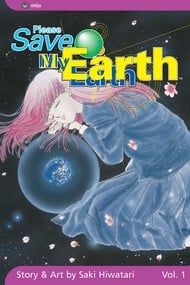 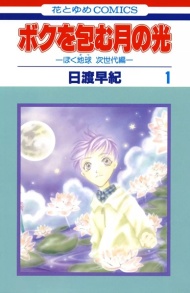 Boku wo Tsutsumu Tsuki no Hikari 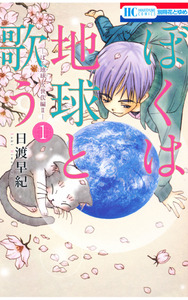