Gift from an Angel

The Face of an Assassin

Where the Tears Go

A Fine Line Between Offense and Defense

Initially, the concept was quite interesting so automatically I wanted to know more.. but as soon as I got to the 3rd episode I just knew I was gonna be disappointed. I ended up running to the manga to see how the story wrapped up... a bad idea that was.  I refuse to believe the same man who created 'Death Note' created this disappointment of a series. How do you mess up this badly... not only with the characters but also taking such an interesting concept and have it crash and burn to bits. A rare talent indeed. No, I do not recommend wasting your time w this show.

Story: [3/10] Platinum End follows Mirai, a troubled middle schooler who is ready to take his own life before he is saved by an angel, Nasse. Nasse tells him that she has selected him for a competition between 12 other suicidal people in Japan, each selected by one of 13 angels, and that one of these candidates will become God. Some of the other candidates take this to mean that if they are able to kill the other 12 candidates, that they will become God and thus chaos ensues.  The plot of Platinum End is nearly identical to Mirai Nikki in concept, the protagonist is unwillingly brought into a battle to become God and is forced to fight against, rather eccentric opponents in order to survive. Mirai is given wings that enable him to fly faster than sound, a red arrow that can make others fall in love with him and a white arrow that can instantly kill its target.  I found the story quite disappointing, the plot is absolutely ridiculous. It is violent, shocking, bizarre and perverted, normally I'd be all for that but it's also just really silly. Candidates were selected for arbitrary reasons, they either were or are suicidal and unsurprisingly most of them aren't interested in becoming God in the first place. Only one candidate so far wants to become God and he will do literally anything to ensure he is selected, he will use and kill anyone but we don't know why yet. The story is a series of highly questionable choices, coincidences... god, so many coincidences it is beyond belief. It is a black and white fight. Evil side has a psychopath who enjoys killing people, "his slave" who is borderline insane and a mind-controlled middle school model who delivers fan service.  Mirai Nikki, Darwin's Game, Tower of God, Juni Taisen and many other anime have the same plot, and Platinum End isn't doing the same plot better *SPOILERS ALERT* I want to summarise episode 9 just to illustrate why 3/10 is a fair rating and because I find it hilarious. We are introduced to Hajime, a god candidate who was an unattractive and poor high school student, upon gaining his powers he decides to use them to change himself. He steals money using his red arrow and becomes ultra rich, he spends that money on plastic surgery + spends all his time exercising and becomes an irresistible chad. He then finds one of our protagonists because he met someone that had been struck with the red arrow, later in the episode he finds the main villain through the exact same method, in both cases, it was a complete coincidence to find these people. He saw the main villain on the TV and thought he was really cool and so he is determined to become his "slave", after tracking him down, he begs the villain, Kanade, to allow him to be his slave. Afterwards, he abducts the family members of a protagonist he randomly found to force a fight. Hajime is a deranged lunatic, that's his character. Meanwhile, Kanade's friend also discovers his identity because the fan service serial killer model who Kanade mind controlled stated although she had killed a few cute girls, she would like to kill lots of girls who aren't cute. Kanade's friend had once joked that his one wish would be for all ugly girls to disappear + Kanade has some bandages on his head and so he puts 1 and 63 together and figures Kanade MUST be Metropoliman.  The whole episode is nonstop absurdity and the other episodes aren't that much better. Animation: [5/10] The abilities look janky, the angels are nude waifus and everything else looks pretty normal.  Sound: [8.5/10] The OST is good and the voice acting is quite great, as usual but nonetheless, always impresses me.  Characters: [3.5/10] On one hand, the villains are terrible characters and just boring, but the protagonists have potential, The interactions between Mirai and Nasse/Saki/Nanaoto have been great, Mirai's philosophies are both inspiring and quite naive, hie fanatic pacifism is so constantly challenged that it has become quite interesting. Watching these four interact has been a lot of fun, and they have the potential to be quite deep. I hope things continue to be developed but I dare not have high hopes.  Overall: [4.5/10] If you turn your brain off, the anime has violence, waifus, nudity, yuri, battles and many dark themes, it's not a bad way to kill time. EDIT: I finished the anime, I think the review still stands but the OST is actually pretty good, I'm going from 6.5 to 8.5. The main characters failed to progress as I'd hoped, gradually becoming more generic and failing to develop further and other characters were absurd and quite insufferable. I just found the overall plot really boring. I still stand by my overall, and if at any time it gets boring, you could just drop it, just don't try to press through if you get bored because it's not getting any better.

This had so much potential, and it just fell flat. At the beginning of the show, I had very high expectations. Since the author is the same as Death Note, I was expecting the story to be intracetly thought out and for their to be complex themes. I kept my mind open to the whole concept of the show, expecting him to use the God selection process as some type of rhetoric for the human race. Boy, was I wrong. I think that the first half of the show is more interesting than the latter half as it did provide more complex themes, and overall, it was just more promising. As the show kept progressing, my hopes kept dropping, and honestly, I don't think I'll ever rewatch this, especially after watching the final episode. I won't spoil it for those who want to watch it, but be prepared to feel unfulfilled. Once the episode had finally finished, I sat there wondering what I had just watched. There was no real resolution, and the story feels incomplete. I don't know what the point of Platinum End was. 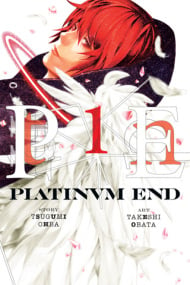