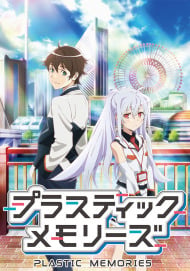 When you watch the first episode of this anime you may be put off by the slow intro that feels so much like every other light hearted romance/office hijinks show you've seen but I'm telling you that you owe it to yourself to sit through the whole thing. Without spoiling it, its really hard to convey the range of emotion that this anime is able to get across without seeming as though they made it just to pander to audiences. This show has weight and substance but isn't afraid to lighten the mood in-between just so that things don't seem so bleak.

If Anime Planet had post titles, this one would be "I've already forgotten Plastic Memories". (Warning, there be some spoilers ahead.) The backstory is simplicity itself - in the near future androids indistinguishable from humans, the Giftia, with human intelligence and emotions are real. The catch is that they only live for nine years and when their end nears, they're recovered by the manufacturer. Our Hero, Tsukasa, has just been hired as a Spotter, a member of one of the recovery teams. However, his life is complicated by two factors; First, the law requires that the Giftia's owner be present when they are recovered and shut down. Second, he's fallen hopelessly in love with Isla, a Gifita girl and a co-worker, who has less than three months to live. The requirement that a Gifitia's owner be present causes particular heartache. Almost every owner grows attached to their Giftia, who often serve as surrogate parents for orphans or as companions for the elderly. Some accept the fate of their companions with equimanity, other fight to avoid accepting reality, a very few go on the run to avoid recovery. These few are a particular problem, as their end approaches Gifita suffer from dementia and the controls that keep their strength and speed down to merely human levels gradually decrease in effectiveness. They could have gone so many directions with this story, high concept SF, a simple story of tragic romance, or an office drama. (Just to offer a few examples.) With care, they could even have stitched them together... But they didn't excercise that care. They simply tried to cram too much into thirteen episodes, and the writers just weren't up to the task. They either couldn't or wouldn't chose one path or work to bring the elements into balance until almost too late - which resulted in a kind of plot whiplash as they jumped from one incompletely worked out idea to the next. Worse yet (and emblematic of the overall problems), whenever things turned serious, they often tried to relieve the tension with comedy (sometimes an entire episode's worth)... that generally wasn't actually all that funny. Which isn't to say there weren't moments of brilliance, there were actually quite a few of them. In particular the final arc, which concentrates on Tsukasa and Isla's relationship during her final days, has many well done moments as they grow together and accept their fate. The final scenes... as Isla tries to reassure Tsukasa that she accepts her fate and has no regrets as he breaks down under the twin burdens of losing Isla while also being the one that has to shut her down and recover her verge on the best I've ever seen in any media. The result was a show that was bad enough to always be on the verge of being dropped, but not quite bad enough to actually go ahead and drop. Story: 3/10 Simply put, a muddled mess, only emerging with clarity (far too late) in the final arc.Animation 8/10 Clean and bright with a very modern palette.  Even though most of it is undistinguished, the final score is pulled up because they do a very good job of expressing emotions through motion, posture, and facial expressions.   The same is true of the cinematography, mostly middle of the road but with many well done cuts and scenes.Sound 5/10 As far as music and sound effects go, they're neither noticeable nor forgettable.  Basically average. Characters 6/10 Much like the plot, the characters are all over the place.   Many are simply tropes with legs, a couple are very well done.  Some even shift back and forth from one category to the other as the season progresses. Overall 4/10 Despite the better parts of the plot, animation, and characters, I can't honestly give PlasMem a rating that doesn't amount to "not quite makes the grade".   The concept had great potential, but they ultimately wasted too much time and failed to capitalize on what they had to work with. 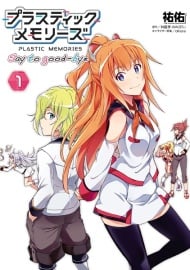 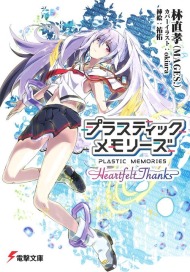