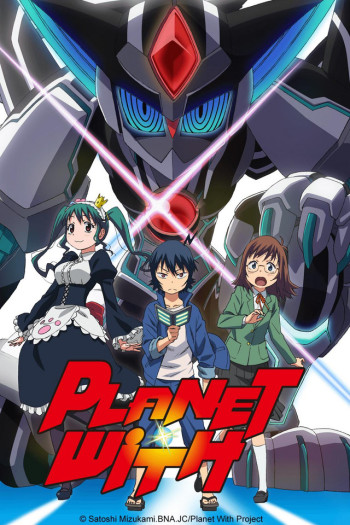 Planet With is an interesting series for a variety of reasons. Outside of the fact that it’s a super robot anime in our current time, its premise sounds almost as peculiar as the designs of the aliens at its disposal. A vengeful fight against a group of heroes ends up spiraling into a conflict about the nature of humanity, and whether subjugation or love is the best path for them. In a way, this plot progression sounds similar to super robot juggernaut, Gurren Lagann from the previous decade. It certainly isn’t as impactful or even as well-crafted, but the charm and overall writing are strong enough to elevate this dark horse to its radar.

First, we need to get an elephant out of the room; this show ain’t a looker. The CGI is generally terrible, making action scenes have no weight to them in terms of actual combat. This makes the combat feel floaty and even silly. The CGI works well when you see some absurd creature designs in the early episodes, but not for the mecha fights that are prevalent within the show, let alone any other machines that appear often. The character models are sometimes CG as well and they look even worse in those rare instances. That said, the designs are more than striking, from the mech and weird alien behemoth designs, to the wonderful, expressive, and/or sexy character designs. The actual animation and direction have some fun moments as well from interesting shots and angles, particularly later on. If only the CGI was up to par with the 2D elements, but alas JC Staff can’t help but continue its recent trend of lackluster visuals. To be fair, at least it stands out, unlike the music, which aside from the decent OP and ED, is serviceable at best.

Where the show makes up for this is in its character exploration and chemistry. While few characters outside of Souya and Ginko are very memorable, the show does a wonderful job at exploring them and making their personalities bounce off each other. Most of the gags are spot-on, and despite how formulaic the early episodes were with some of its characters, what we got in terms of their backstories and how they dealt with everything was solid enough in its own right. Their conflicts, while spelled out to borderline obnoxious degrees, are handled in an engaging way, and the fact that this show works well as a modern surreal super robot shounen anime adds to this, right down to the finale. The show never indulges too far in its own bleakness despite how horrific several backstories can be and how the characters break down. All of this makes these characters charming for as unremarkable they may be. The comedy and romantic moments work effectively in that same vein. It never quite reaches Studio Gainax levels of maintaining that perfect balance between quirky, and downright tragic with shows like Gurren Lagann or Nadia. Despite this well-respected mangaka Satoshi Mizukami still crafted arguably the most well-rounded show of the year. Cramming it all into 12 episodes as cleanly as it did is arguably one of the show’s greatest feats as well.

Ultimately, this dark horse managed to be one one of the most surreal and charming shows of the year, visuals notwithstanding. Its conflicts are somewhat engaging, its feel is wonderful and genuine, and it manages to stand-out within this gigantic seasonal crowd for a variety of reasons. It’s a truly solid work with some real heart and talent to boot. Dare I say, with better action and CGI, this show could have been one of the greats. It certainly worked better as Gurren Lagann’s successor than Darling in the FranXX ever did.

I'm not usually a fan of sci-fi; there are very few sci-fi anime I've seen, and even less which I've actually enjoyed.  This series, however, I feel is an overlooked gem between the characters, setting, and especially the tone.

"Just what is justice"?

That's the theme of this anime, and it's done brilliantly.  It really highlights the philosophical concept behind the word "justice".  And of course for those who aren't as interested in that sort of thing, it's got plenty of mech battles to satisfy those who prefer action.  There's also a "love vs violence" theme going on (though sometimes, even the side advocating for love has to fight).

Soya Kuroi is a high school student who lives, oddly enough, with a spunky green-haired girl and a giant cat.  At first, he can't remember his past and attends school as any normal (despite his housemates) kid would, but when his memories return, he swears that he will defeat even the upholders of "Justice", the heroes, of Earth, due to the destruction of his planet.

But perhaps things aren't as cut-and-dry as they appear to be.

It's a fast-paced story which moves along quickly to get from one thing to another.  On the plus side, that means no fillers or "padding".  On the minus side, things tend to move too quickly at times.

The anime boasts a broad range of characters; from our protagonist Soya to the class rep Nozomi, and even to the seven heroes of Earth and the aliens (some of whom who look human-like) of the organization of galactic peace called "Nebula".

Where the anime shines is in how it portrays each of these characters, especially showing a very human side of Soya with the raw emotions he (and the others) go through as they walk down a path of their ideals and determination.  Soya and Nozomi, especially, show a lot of character growth and development.  A couple of the Heroes also do...

...however, that's also the downside in that since this is a 12-episode cour, there wasn't enough time to focus on each character individually for enough time to truly get to know them.  We get to know some more than others, and their names based off of animals certainly helps us to remember them (not to mention that the designs make them easy to distinguish from one another), but this anime perhaps could have benefitted from being a 22-24 episode anime instead of a 12-episode one.

Even for a sci-fi action anime, and especially with the moral tie-ins of philosophical debates which some of the greatest minds have been asking and still talk about (simplified, of course, but still carries the deeper meaning), it would have been nice if the anime was able to slow down just a little bit to give some more focus on the Heroes and other recurring characters (aside from more than a few minutes in an episode).

No issues with the sound or animation; they both tie in together, and occur when appropriate and keep silent when necessary.

The animation is very smooth and flows well, which is definitely something desired for an action-packed anime with battles all over the place.  There were some parts where it felt a little clunky and a bit awkward, but I don't recall any major issues other than that.

The opening and ending songs are upbeat and catchy, and the voice acting brings the characters to life.  So, no complaints with the sound.

Again, I feel this anime is a gem...but would have been better as a 22-24 episode series.

There are a few things left unexplained, such as when/how/why Nebula was established...and just why exactly a particular character was going along with the first antagonist's plans.

It would have been nice to learn a little more about the Nebula organization and what caused the split, ect...as well as giving some more time to these recurring side characters (not that they're truly "side" characters as they all have important roles; mostly the Heroes from Earth).

It's also unexplained whether or not psychic abilities are things all Earthlings would be able to awaken in this universe, or if it just applies to certain people (such as the Heroes...and a couple others).

And again, the characters definitely needed some more background.  We do learn about a couple of the Heroes (some more than others) due to circumstances which occur over the series in a rather interesting way to learn about their pasts, but the story had to move quickly with only 12 episodes to cover it so I felt that all the characters didn't get the time they really should have.

On the plus side, that meant that battles didn't span multiple episodes (save the final battle), which meant no long and drawn-out fights.  That was nice to see.

And of course, the question of moral decisions which is a theme of this anime.

Is it right to force one's own sense of justice on others, even if it seems to be for the greater good?

Could you forgive the creature which single-handedly wiped out your entire race and planet (not to mention your friends and family)?  Or would you despise it and allow the circle of hatred to continue?

The theme of this anime is thought-provoking and deep; it can be summed up from in this quote from another anime:

"Justice is a weapon. It can be used to cause harm, but it cannot protect or save others."  -Osamu Dazai

For there to be justice, there has to be a victim.

And yet, decisions still have to be made; moral choices still have to come forth.  This anime delves deeper than even some of the 24 episode length anime does in its theme and the way the characters react to that theme.

In all of that is also a mix of fast-paced battles and an anti-hero amongst heroes.  I honestly would recommend this anime to everyone.

What is this anime?
Amnesiac boy wakes up to a goth lolita and a man-sized cat as caregivers. He very quickly starts to regain his memories while fighting invaders attacking earth.

Did I enjoy it?
Very fast paced. One part I distinctly remember is a character saying "Let's fight in a week's time, once we both have a chance to recover". The next scene is them a week later on the battlefield preparing to fight. Then there's a 4 year time-skip. No time wasted. The amnesiac trope is done well. He very quickly regains his memories, with a good reason why they are gone. Once regained, his past memories drive him to fight, also for a good reason. The MC, although a bit loony, has a one-track-mind and makes decisions that one would normally make in his situation. The show is light-hearted (except for some back stories) and many times, neither side takes things too seriously. You can expect a break in the fights with random comedy bits. Can recommend even if you aren't especially into mecha fights. I'm not much of a fan of fight scenes unless they are truly special. However, the comedy bit's/background's of the characters I enjoyed very much. oh and be prepared to listen to them say engrish attack-names everytime they do a move