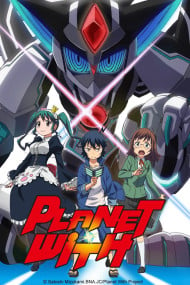 Souya Kuroi is a high schooler living a peaceful life despite having no memories of his past. One day, however, his town is attacked by one of the mysterious Nebula Weapons. Together with the cat-like “Sensei” and the gothic lolita Ginko, Soya gets dragged into a battle against... seven superheroes who protect the town! What is Soya's reason to fight? The answer lies in his memories.

Power Is What Dwells Within Your Own Self

Behold, The Universe is Filled With Blessings

Planet With is an interesting series for a variety of reasons. Outside of the fact that it’s a super robot anime in our current time, its premise sounds almost as peculiar as the designs of the aliens at its disposal. A vengeful fight against a group of heroes ends up spiraling into a conflict about the nature of humanity, and whether subjugation or love is the best path for them. In a way, this plot progression sounds similar to super robot juggernaut, Gurren Lagann from the previous decade. It certainly isn’t as impactful or even as well-crafted, but the charm and overall writing are strong enough to elevate this dark horse to its radar.First, we need to get an elephant out of the room; this show ain’t a looker. The CGI is generally terrible, making action scenes have no weight to them in terms of actual combat. This makes the combat feel floaty and even silly. The CGI works well when you see some absurd creature designs in the early episodes, but not for the mecha fights that are prevalent within the show, let alone any other machines that appear often. The character models are sometimes CG as well and they look even worse in those rare instances. That said, the designs are more than striking, from the mech and weird alien behemoth designs, to the wonderful, expressive, and/or sexy character designs. The actual animation and direction have some fun moments as well from interesting shots and angles, particularly later on. If only the CGI was up to par with the 2D elements, but alas JC Staff can’t help but continue its recent trend of lackluster visuals. To be fair, at least it stands out, unlike the music, which aside from the decent OP and ED, is serviceable at best.Where the show makes up for this is in its character exploration and chemistry. While few characters outside of Souya and Ginko are very memorable, the show does a wonderful job at exploring them and making their personalities bounce off each other. Most of the gags are spot-on, and despite how formulaic the early episodes were with some of its characters, what we got in terms of their backstories and how they dealt with everything was solid enough in its own right. Their conflicts, while spelled out to borderline obnoxious degrees, are handled in an engaging way, and the fact that this show works well as a modern surreal super robot shounen anime adds to this, right down to the finale. The show never indulges too far in its own bleakness despite how horrific several backstories can be and how the characters break down. All of this makes these characters charming for as unremarkable they may be. The comedy and romantic moments work effectively in that same vein. It never quite reaches Studio Gainax levels of maintaining that perfect balance between quirky, and downright tragic with shows like Gurren Lagann or Nadia. Despite this well-respected mangaka Satoshi Mizukami still crafted arguably the most well-rounded show of the year. Cramming it all into 12 episodes as cleanly as it did is arguably one of the show’s greatest feats as well.Ultimately, this dark horse managed to be one one of the most surreal and charming shows of the year, visuals notwithstanding. Its conflicts are somewhat engaging, its feel is wonderful and genuine, and it manages to stand-out within this gigantic seasonal crowd for a variety of reasons. It’s a truly solid work with some real heart and talent to boot. Dare I say, with better action and CGI, this show could have been one of the greats. It certainly worked better as Gurren Lagann’s successor than Darling in the FranXX ever did.

Satisfying Conclusion?✔️Emotional?✔️ (in brief backstories)Actual Romance?❌Actual Comedy?✔️ (couple laughs, mostly smiles)Fanservice/Nudity? ❌ (single bath scene. advances story though)Recommend?✔️ (if u want a fast paced mecha)What is this anime?Amnesiac boy wakes up to a goth lolita and a man-sized cat as caregivers. He very quickly starts to regain his memories while fighting invaders attacking earth. Did I enjoy it?Very fast paced. One part I distinctly remember is a character saying "Let's fight in a week's time, once we both have a chance to recover". The next scene is them a week later on the battlefield preparing to fight. Then there's a 4 year time-skip. No time wasted. The amnesiac trope is done well. He very quickly regains his memories, with a good reason why they are gone. Once regained, his past memories drive him to fight, also for a good reason. The MC, although a bit loony, has a one-track-mind and makes decisions that one would normally make in his situation. The show is light-hearted (except for some back stories) and many times, neither side takes things too seriously. You can expect a break in the fights with random comedy bits. Can recommend even if you aren't especially into mecha fights. I'm not much of a fan of fight scenes unless they are truly special. However, the comedy bit's/background's of the characters I enjoyed very much. oh and be prepared to listen to them say engrish attack-names everytime they do a move 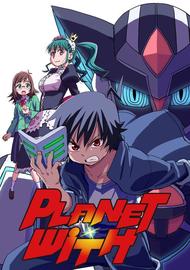 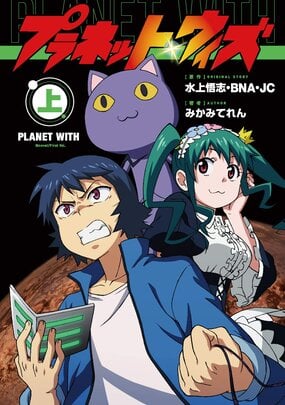