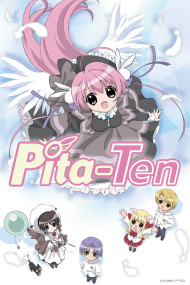 Tragedy struck Kotaro Higuchi as a child in the form of his mother's death in a car accident. But fate has a funny way of doing things, and years after the fact an angel-in-training named Misha decides to pay him a visit. Joined by his fellow elementary school students, and later by the nicest demon you'll ever meet, Kotaro and Misha will embark on a journey of laughs and love.

StoryPita Ten's storyline suffers a fair bit from repetition, which only further reinforces the idea that the anime is an exceedingly shallow version of something better. A good deal of the jokes in the show is reused with little variation, and the episodic plot really begins to drag after a while. Aside from the first and last episodes, the anime is composed entirely of meandering and inconsequential subplots, which is something that Ive never really enjoyed that much. The final two episodes are actually fairly plot-oriented and end up being the most interesting of the bunch. As for the rest, theres really not much to say other than that I became progressively less interested in the show as I watched more of it.AnimationWhile certainly not groundbreaking by any stretch of the imagination, the visuals are fairly nice. Character designs are suitably adorable, movement is decent, if not completely fluid, and backgrounds are more than passable. Overall, this is what one would expect a standard shoujo anime to look like, except perhaps a little nicer.SoundMisha's seiyuu follows traditional belief that mispronouncing words in a piercing voice is "cute." Other than that, however, I have no complaints. The rest of the voice acting ranges from acceptable to pleasant, and the background music fits fairly well with the show. The OP is surprisingly decent, in that in some parallel universe I could actually see myself admitting to liking it.CharactersMy idea of adorable seems to conflict somewhat with a Japanese schoolgirls, and Pita Ten draws this into sharp relief. With Misha the angel, we are treated with a character that literally cannot do anything without somehow making the situation far, far worse (to comic effect, of course). Her idiocy in and of itself seems to be presented as a sympathetic trait, a concept that is clearly beyond my personal limits of understanding. The highlight of the show is probably Shia, a demon who just cant seem to muster the willpower to be really, truly Evil. The rest of the characters are suitably quirky, and fit into their respective roles decently enough.OverallPita Ten sets out to do a specific thing, and then proceeds to do that thing perfectly. The question, of course, is whether the final product is actually appealing.In essence, this is shoujo fluff to the highest degree. The characters are charming, the humor is solid, and the kawaii factor is kicked up to eleven. To do all this, however, the show sacrifices a good deal of depth, intelligence and basic plot. In short, Pita Ten can best be described as Fruits Basket with all the meaningful parts cut out. All the appealing lighthearted humor is still there, but thats essentially all thats there. As a result, Im sort of sitting on the fence on whether to recommend this. While I did enjoy the series enough to watch through the entire show, I was never really actively interested in what was going on. The laughs elicited became scarcer and scarcer as the show went on, and the ending was anticlimactic enough to make me wonder if watching the entire thing was actually worth the effort in the first place. For now, Ill give it a 6 - a weak recommendation, but a recommendation all the same. However, if you're not already a fan of mahou-shoujo, this is certainly not the series to convert you. 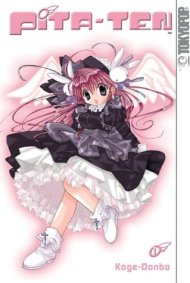 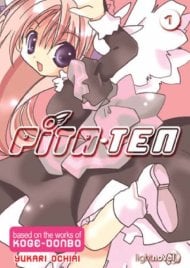