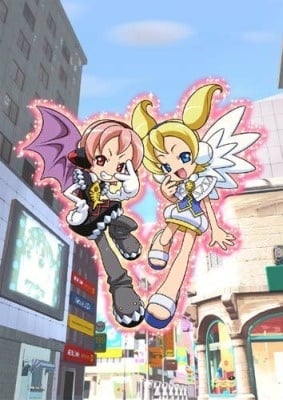 Forget the fashion police or a therapist – the Pinky Street action figure Saki is here to save the day! Mei is a tomboyish girl who would love to spend more time on fashion like her favorite Pinky Street figure, if she wasn’t busy being hassled by her male classmates; Keiichirou is an otaku who collects Pinky Street figures, and who has just been in a fight with a good friend. Both are taken in their sleep to the fabulous Pinky Town, where they are taken to a clothing store, toy store, and have a bite to eat with Saki herself! What other insights await our heroes?

StoryHave you ever wanted to watch Barbie on the big screen? Replace the American staple with a line of dolls called Pinky Street, and you have this cute, yet relatively shallow anime. While Pinky Street has two episodes, each is a completely separate story - the two together totaling only thirty minutes in length. The first episode follows a girl who has a tomboy reputation and a desire to immerse herself in the world of fashion; and the second follows a Pinky Street fanboy who has just gotten into a fight with his friend. In each episode the characters are taken to Pinky Town where they partake in various ice cream snacks, receive advice from the lovely Saki, and eventually return to whence they came.  While I can imagine that there is some merit in teaching young girls to dress how they like, little additional morality can be gleaned from these episodes. Pinky Street comes across as being superficial and shallow, as everything tends to become better for the characters once they embrace the world of fashion. Is that a message we should be sending our kids? In a Barbie-filled, plastic world, perhaps it's unavoidable. In general, you can tell that Pinky Street was created solely to be blatant product placement and/or a marketing tool for the products - and that isn't really a good thing. AnimationPinky Street's animation alternates between being fairly typical to flat-out 3D, depending on where the story takes place: the real world, or Pinky Town. The regular animation is cute and colorful, with slightly stunted characters and an overall appearance that you'd generally see in anime aimed at a younger audience; however, I can't help but wonder what the creators were thinking with even the regular character designs. Pinky Street is aimed at little girls, right? So then why does the mother have enormous knockers and clothing that accentuates said knockers excessively? On the flipside, the 3D animation is also colorful and appealing with very rounded characters, smooth surfaces, and realistic looking hair. Small additions such as a plethora of adorable stuffed animals and tasty ice cream treats help accent the 3D experience nicely, and transformation sequences are crisp, clean, and fun to watch. Backgrounds are gorgeous, and movement is relatively fluid, yet a bit jerky when the characters walk. My main complaint would be that in the two episodes of Pinky Street, various scenes in the Pinky Town are reused time and time again; we want variety, anime creators!SoundPinky Street's title track is fluffy J-pop with mandatory female vocals, and sounds as though it could be heard in the background of any Saturday morning cartoon aimed at little girls. There are a few other songs throughout the combined thirty-minute total, but none are memorable in any way. The soundtrack's superficiality definitely fits the tone of the anime, so I can't knock the score down too much.CharactersAs with the audio, Pinky Street's characters are shallow and superficial - and thus fit the tone of the anime perfectly. While I can't say any of the characters interested me or seemed unique in any way, that isn't something you can necessarily expect from an anime solely built as a marketing ploy. We know little about the main human characters except that they end up being involved in fashion in one way or another; Keiichirou specifically, however, is a bit on the creepy side and thus you can't take his half of the story seriously. OverallPinky Street is shallow, superficial, and somewhat pointless; but regardless, it still is a cute and somewhat entertaining viewing that kiddies may enjoy. Though it may be the bubblegum anime of the otaku world, it still might appeal to some. If you have a little girl who is obsessed with Barbies and is looking for something new to watch, Pinky Street could be just the thing for you.