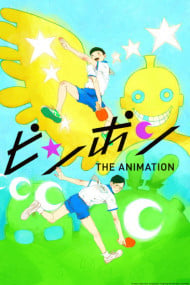 So why is Ping Pong such a special anime? It is a blast not only for the senses, but for the mind as well. As it was directed by Masaaki Yuasa, the man behind Kaiba and Tatami Galaxy it is no wonder. But let's not get ahead of ourselves. What is Ping Pong? Well my friend it is a show about Ping Pong, the only thing more boring than regular tennis. But Pinky-sama why is it a good anime if it focuses on something as boring? Well, simply because it does not focus on the sport, but rather because it focuses on the characters. Basically the same thing that makes Neon Genesis Evangelion the best mecha, use the mecha (or the sport in this case) only as a part of the form, not as the sole point of the show. So what exactly does make the characters so special? Well there are quite a few and each one has a story behind himself. Why did he/she start playing ping-pong? What does he still do it? Does he see himself as a professional sports player in the future? Is he willing to bet everything on it? Does he have the talent? But these aren't just randomly thrown in questions and themes that are here only to cheat you into thinking it is smart. They are all worked around extensively, in fact I was suprised at how coherent they were considering how it is only eleven episodes long. It also had a very fast pace so you could see how each character was growing and what he becomes at the end.  Peco is for example a very talented player that is very lazy and doesn't train a lot, but talent alone doesn't get you very far. He had to learn how to deal with hard work and training, consider if he even wants to play ping pong in the long run professionally. And every character goes through phases of thinking about his life and how he wants to live it. The animation was outstanding. As you already know who directed it it is no wonder. The style itself is very different from the standard anime norm which alone makes it a bit more fun, but that alone doesn't mean much. What is important is using animatiion as a medium different to all other mediums. And that it did, it used visual symbolism, odd angles and cut out fights to make people playing a sport actually interesting. You might say that the "action" works better than in most actual action shows. The sound was equaly pleasing. Using sounds to make the visual metaphores more vivid or simply the opening and the ending. The voice acting was also on a high level as they actually bothered to bring in a person who speaks Chinese to voice a Chinese character. That gave him a lingual background and made him distinct from the rest of the crowd. Overall Ping Pong is quality wise the best non-sequel we've had in years, basically since Tatami Galaxy. 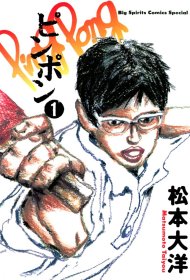