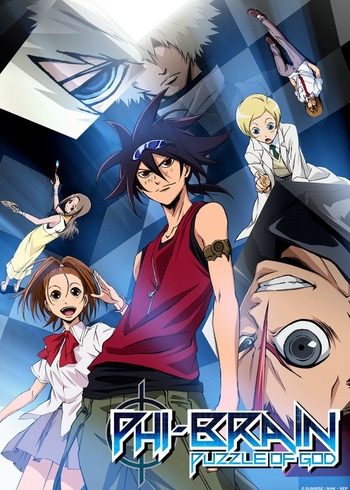 How on Earth did Kaito find himself entered in a cross dressing contest? Meanwhile, the school principal has installed a new puzzle within the school, and Nonoha's been taken hostage and put right in the middle of it!

A Pact Concealed Within a Maze

The Girl in the Secret Room

Invitation from a Nightmare

Restoration Towards the Light

The Fallen Apple & the Path's Continuation

Welcome to the Queen's Country

The Queen Strikes Back

Some years into the future, a strange, unexplainable natural disaster has broken off a piece of the Japanese mainland. Known as the Lost Ground, it is now inhabited by people with Alters -- machine-like extensions of their own will. In order to keep the peace on the Lost Ground, the HOLY organization uses its own Alter capabilists to police the region. In the...

This may seem like an odd recommendation, but hear me out - in my opinion, some of the best recommendations out there aren't based solely on plot, but on the relationship between the main characters. For example, Gungrave and Berserk couldn't be less similar when based on story alone, but the char development and char dynamic is dead-on. The same can be said for these two - Kaito and Gammon's comical and at times serious frenemy relationship in Phi Brain is nearly identical to Ryuto and Kazuma in Scryed. If you enjoyed the dynamic in one, try out the other.

Both shows have characters that love to hate each other and plenty of interesting battles occur because of this. Scryed is a little more action adventure based where Phi Brain goes the puzzle solving school life route but either way I'm sure fans of one would enjoy the other.