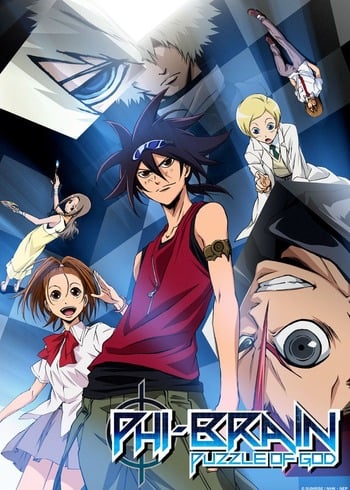 If you're looking for anime similar to Phi Brain: Puzzle of God, you might like these titles.

This may seem like an odd recommendation, but hear me out - in my opinion, some of the best recommendations out there aren't based solely on plot, but on the relationship between the main characters. For example, Gungrave and Berserk couldn't be less similar when based on story alone, but the char development and char dynamic is dead-on. The same can be said for these two - Kaito and Gammon's comical and at times serious frenemy relationship in Phi Brain is nearly identical to Ryuto and Kazuma in Scryed. If you enjoyed the dynamic in one, try out the other.

Both shows have characters that love to hate each other and plenty of interesting battles occur because of this. Scryed is a little more action adventure based where Phi Brain goes the puzzle solving school life route but either way I'm sure fans of one would enjoy the other.

Disowned by his father, Juugo Yama has run away from home to the island of Nanae. He begins to live by himself, only to discover his room is haunted by the ghost of Nanana Ryugajo. She was murdered ten years ago, and her killer must be found before she can rest in peace. Before her death, Nanana collected things from all over the world and hid them throughout the island. Using the mysterious powers of these hidden items, they should be able to find the culprit. As Juugo begins his hunt for her collection, however, he discovers he's not the only person searching.

These are both anime about solving various puzzles to gain new treasures. Both anime all involve a large cast of characters that meet and interact because of their mutual desire to solve the puzzles and collect the treasure. Both of these shows have a lot of comedy that they blend into their more serious moments.

The big difference here is most of the characters in Phi Brain like solving the puzzles just for the sake of solving them. In Nanana the puzzles are an obstacle in the way of getting to the treasure. However, both shows have protagonists that are good at thinking outside of the box and coming up with interesting solutions to these puzzles. Both shows also have a strong element of mystery surrounding the puzzles and their treasue.

If you enjoy puzzles and mysteries in your anime then you should check out either of these titles.

While in Phi Brain the main character is the hero-type AND the puzzle-master, in Ryuugajo Nanana no Maizoukin, these roles have been split into two opposing, yet, cooperative sides. Plus, the detective is a girl and she's a cutie!

The mystery of "The Blade Children" is a secret which has remained well-hidden, and has cost some their lives. After Narumi Ayumu's brother disappears in a search for the answer, Narumi is forced to unravel this mystery for himself. Join him in his investigation which will lead him to the secrets of the Blade Children, and to tests of skill which may prove to be fatal.

Spiral feels a lot less shounen and is a lot more serious than Phi Brain - but both involve special 'children' and a whole mess of deadly puzzles, with plenty of analytical thinking and baddies to boot.

Both shows have a group of students using their brains to figure out puzzles (phi brain) or word quiz questions (nana maru san batsu). Phi Brain is more life and death scenarios than the tame school life of Nana Maru San Batsu but I'm sure fans of one would enjoy the other.

After saving Japan from a missile attack, Akira Takizawa erased his own memories and disappeared, leaving a simple message for Saki: he’ll be waiting in the place where this all started. Having searched for him for some time with the help of Kazuomi, Onee and the rest of the gang, Saki finally determines that Akira is in New York City and heads there to find him. However, the rest of the Selecaos are also looking for Akira, and not everyone is happy about his impending rise to become the King of Japan...