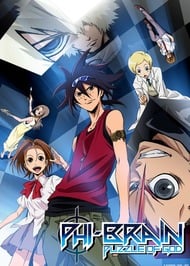 No one loves puzzles more than Kaito Diamon, and when it comes to solving them, he's the best there is. But when a labyrinth underneath his school leads him to an mysterious armband that can unlock his brain's full potential, he is put on the Puzzle Of God organization's radar as one of the children of Phi-Brain. Now he must push his mind to the limit as the P.O.G. challenges him relentlessly to their deadly puzzles. With a plethora of dangerous, laughable, creative, or down-right demented puzzles being thrown at him, will Kaito have what it takes to solve his way to victory or will he fall against the puzzles he adores so much?

Phi Brain is supposed to be about mind games and dangerous puzzles where failure may lead to death. The protagonist is a genius in puzzle solving and for that he is chosen to be part of a dangerous puzzle solving line of games. You probably noticed that I wrote the word “puzzle” many times in a short amount of words, but trust me the anime keeps mentioning it even more frequently. You know, like in YuGiOH where they mention the word “cards” every two minutes. Same thing. And it is of equal level with that show as well, despite trying to sound serious and intelligent with the word puzzle. Oh, and it’s hardly as cool as well. The characters are standard shounen stereotypes; too irritating and dumb to get a liking for. Shallow as well since the only thing they live for is solving puzzles if they are boys or following around boys as minor support if they are girls. Yay! And haven’t we all got tired of shows where high schoolers go to school where the only thing they are doing is NOT school work? Hey guys, I know it is very important to show that they are good kids who go to school every day, but it is kinda pointless if it is just there without a purpose in the story. IT IS ABOUT SOLVING PUZZLES, NOT SHOWING SCHOOL GROUNDS! I bet they do it on purpose so they can reuse scenery footage from other shows. Or waste airtime. Or get to our nerves. The protagonist is supposed to be super smart and we are meant to find that cool or something but in reality it is all an illusion. Remember Lelouch in Code Geass where most thought he was a great chess player? Same thing; we are only given a few glimpses of the game and then the solution is offered without ever showing us HOW HE DID IT. So looking at the hero solving a sudoku in 10 seconds without ever seeing his line of thought, means ABSOLUTELY NOTHING. If you happen to have watched Kaiji or Akagi then you know what I mean. There is absolutely no flavour or fleshing out between the characters and the way they think and feel. They are retards with nothing inside and you get bored of them very fast.Thus the whole show has to do with puzzles as much as Naruto has to do with ninjas. NO RELATION AT ALL! Hell man, what is the point of a mystery if you are just told who the guilty guy is right away, without ever explaining WHY? And what is the point of wasting 2/3rds of each episode in irrelevant school nonsense and tired juvenile humour? It is all a retarded motivational show so little kids can go solve sudokus or something. Too bad it is never actually helping them to be better at solving them, so chances are they will give up fast and return to playing Counterstrike or something. As for the REALLY smart kids, I bet that watching such a show will make them dumber. The final nail in the coffin is when the protagonist is offered a magical item that makes him even more imba in puzzle solving (without again showing us how), as if he couldn’t do it without it. Oh and his eye changes colour as well. The relations to YuGiOh and Naruto never end and thus it is clearly of the same level as them right away. Fancy but retarded. Later on they constantly try to make us feel there is a world conspiracy going on and there is this ancient power that can do a lot of stuff if you… yes, solve puzzles. They even try to make it look as if the protagonist is taken over by a dark side and the whole thing reeks of YuGiOh stereotypes and a thousand times of hearing the same words repeat again and again. NOT GOOD AT ALL! This is what Kaiji and Liar Game watch to laugh. This is what paralyzed people watch so they can facepalm. This is what you will show to the geek boy in your class, so its scores will drop and make fun of later. Oh, I forgot to say something about the production values, didn’t I? Ok, here you go: They are mediocre without any attempt at making the puzzles exciting. And that is all you need to know about them.

STORY – 7/10There have been a lot of anime over the years that focus on games and puzzles. However, most of these are only for kids. This one allows a nice break from the archetype, creating an interesting anime experience. It isn’t held back by the fact that it needs to stay kid-friendly. Also, the puzzles are well thought out. They’re difficult enough for people to think “damn, how can that work”, and clever enough to make you think at the end “wow, the answer was right in front of me!” Also, the show has tonnes of variety. Unlike Beyblade, any card show or the god awful Bakugan (that’s the only one out of the three examples I gave that I’ve sadly watched as a child), this show has a massive variety of puzzles in its arsenal. They can range from number games to giant frikkin’ buildings. Also, the other aspects of the story work decently enough. The story creates suspense, mystery, dramatic irony and a healthy dose of humour. After the second half, though, the series goes slightly downhill. The puzzles start to become repetitive and there are many subplots that are lost in the process. But this isn’t its biggest flaw. The biggest flaw is the ending. It was short, boring and overall unsatisfying. It should have at least spanned over two episodes, which could have been done by cutting out another useless puzzle episode where little to no character development occurs. Also, there are many things that will make you question how realistic this story is. With only a slight supernatural element, it’s obvious that this story is trying to be as realistic as possible. But there are times that this story mucks up a bit. For example, why fight using puzzles? I mean sure, it’s a puzzle anime, but it’s not a kids show! There isn’t a single gun in this series, or any other violence for that matter. It’s kinda like Yu-Gi-Oh, where someone says “I could just kill your girlfriend (or best friend in the 4kids version) now, but instead I’ll challenge you to a children’s card game to stuff it in your face”. Still, it’s fun to watch and I enjoyed it. ANIMATION – 6/10It’s sound. Not much to say here. SOUND – 7/10The soundtrack on this thing, although suffering from the usual overuse of the same tunes over and over again, is pretty cool. The theme song is one of the few I don’t mind watching all the way through. It’s the perfect mix of metal (for awesomeness) and weirdness (for the intelligent aspect of the anime). The rest of the soundtrack works pretty well. Still, I long for the day that anime composes a soundtrack in a weekly series that never repeats the same songs (unless for effect). CHARACTERS – 6/10I’m getting a lot of mixed feelings about these characters. They’re strong enough, but they’re kinda underdone. Kaito, the main character, is a bit all over the place here. His character wavers from the traditional hero, to the lazy guy, to the super smart. To make matters worse, his Orpheus ring (the artefact that gives him power, for this season…) causes him to have several psychological breakdowns. And where does this lead to? ABSOLUTELY NOWHERE, THAT’S WHERE! The subplot is pushed aside like it never happened. The other characters are either really well thought out or too clichéd. Nonoha, his ‘best friend who should really be his girlfriend just like ash and misty should have been’, is basically the typical tomboy. They do give her an interesting quirk, however, with her cooking. The so called ‘Nonoha sweets’ are either loved by people or hated by people. You think that she’s a bad cook, but you probably make jokes to your friends that she’s secretly putting toxic ingredients into her cookies.Well, I’m not sure whether it’s in season one or two, but they actually show her cooking her cookies and she puts in stuff like ‘half off octopus’ and ‘toxic waste’. It’s a funny character development, but they could go a little further with that. Gammon is all over the place, just like Kaito. As a side character, he can afford to be, but it kinda gets stupid at times. Sometimes he’s all high and mighty, others he’s only into money and others he’s just so timid and out of character. It’s supposed to be character development, but it doesn’t do so well. Then, there’s Anna Gram (geddit? What a bad joke…). Well, how do I put this? Ever seen those episodes of anime where a one off character who looks like a girl is actually a boy? Know how a lot of otaku in japan feel guilty after that (no offense)? Well, to stop the guilt most shows just take the characters out after an episode or two at most (for example, Haku from Naruto (the anime sucks, the manga is okay)). But in this show, Anna is (despite looking totally like a girl and acting like one) a boy. Also, she sticks around for the whole series. It’s an interesting choice here, and I think it’s good to break from the overused archetype. So, she’s a good character. Finally, the rest of the side characters are lame and boring. Rook is the typical psychopath, the minions are your typical assorted minions and the idiot school guys who have no idea what’s really going on are your typical idiot school guys who have no idea what’s really going on. OVERALL – 7.5/10If I based this purely on enjoyment, I’d rate it higher. But I’m not basing this review on that, so this is the score. It’s a good show, but it has its problems. Watch it. Enjoy it. Like this review (if possible. I’m still getting used to this site). 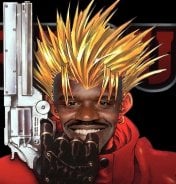 So, I've officially deciding that I'm dropping Phi Brain. I've watched the first 14 eps, the Yu-Gi-Oh! and Professor Layton feeling I got at first has completely worn off and it's nothing but absolutely annoying characters and retarded plot. Not to mention the art design is just plain ugly. 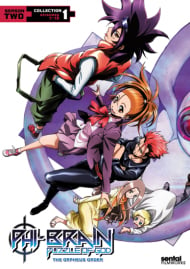 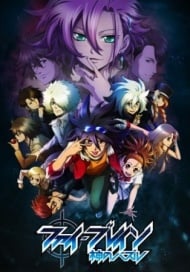 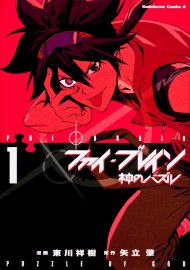 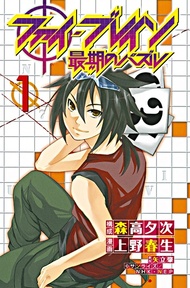