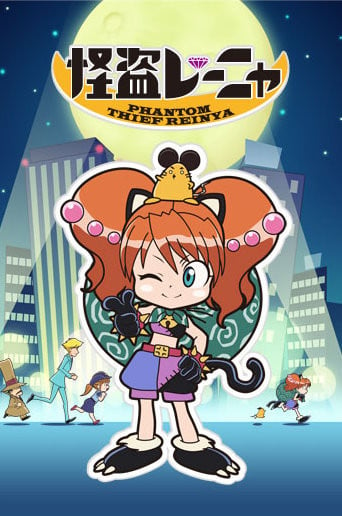 Every town needs a hero. Unfortunately for the human residents of Dark City, theirs is a stray cat. Swooping from roof to roof, its first thought is always of food or being able to catch an elusive mouse – saving the day is just a fortunate side effect. From rescuing lost children to putting a stop to careless littering, Dark Cat finds himself caught up in numerous problems – though caring about none of them. As his name spreads, he finds himself the center of attention as reporters desperately try to snap the unlikely hero. Cheeky and mischievous, this feline favorite wants to protect his kind; but can this renegade kitty stay out of the clutches of a mayor determined to rid the city of strays?

Both anime are about cats or cat like people causing mischief for the town they live in. Both have interesting animation from the norm and have short episode lengths. Both are cute comedies that are sure to get a giggle or 2 out of you. Check out one if you liked the other.

Taishou is the dedicated owner and chef of a small ramen shop in Tokyo – and he's also… a cat?! Though enthusiastic to run the best possible eatery, the feline's cooking skills leave much to be desired – a fact that Tanaka-san, Taishou's most frequent customer, experiences on a regular basis. With part time helpers such as a kleptomaniac bum, and schemes to bring in business such as serving a restaurant critic gourmet food instead of the usual swill, Taishou's ramen shop is never a dull place to patronize or work at!

Both anime are about cats or cat like people causing mischief for the town they live in. Both have interesting animation from the norm and have short episode lengths. Both are cute comedies that are sure to get a giggle or 2 out of you. I found Neko Rahmen to be WAY more hilarious. Check out one if you liked the other.

Cats can be very selfish and inconsiderate beings – Nyako and her little brother Nyatta are certainly no exception to the rule. They live their day to day lives with a total disregard for everything, including the lives of the people they interact with. These kittens can't even seem to perform the most mundane of tasks without some innocent bystander losing a limb, or having their guts splattered all over the room. When you throw their alcoholic father and over-bearing, abusive mother into the mix you have a concoction that will surely reach excessively morbid proportions.

Though Nekojiru Gekijou is way more dark and violent, both that and Kaitou Reinya are shor, face-paced comedies with a wacky sense of humour. If you enjoyed the slapstick and violent nature of one, you may well enjoy the other.

Both Majokko Tsukune-chan and Kaitou Reinya are bright and lively comedic shorts, with an overarching theme of humorous violence. Both have a very similar vibe, so if you like one, you may want to try the other.

Both Kaitou Reinya and Excel Saga have a pleasant randomness about them and neither requires episodes to be watched in a particular order. Excel Saga is more mature and Kaitou Reiyna is well, cute, but if you want some anime to enjoy without getting bogged down by plot, rmotional tension, or character development, both are safe bets.

Were there ever two shows that combined cuteness and randomness more effectively that Kaitou Reinya and Di Gi Charat? I doubt it. Neither will make you think, but both should make you chuckle.

A prologue story to the upcoming Persona 5 game, the vigilante group "Phantom Thieves of Hearts" must work together to take down a band of crooks, and steal its leader's desire.

The Phantom Thieves are together again for one last siege on an enemy Palace. Will they be able to thwart the schemes of a mysterious nemesis, while also avoiding Akechi's wary eye?