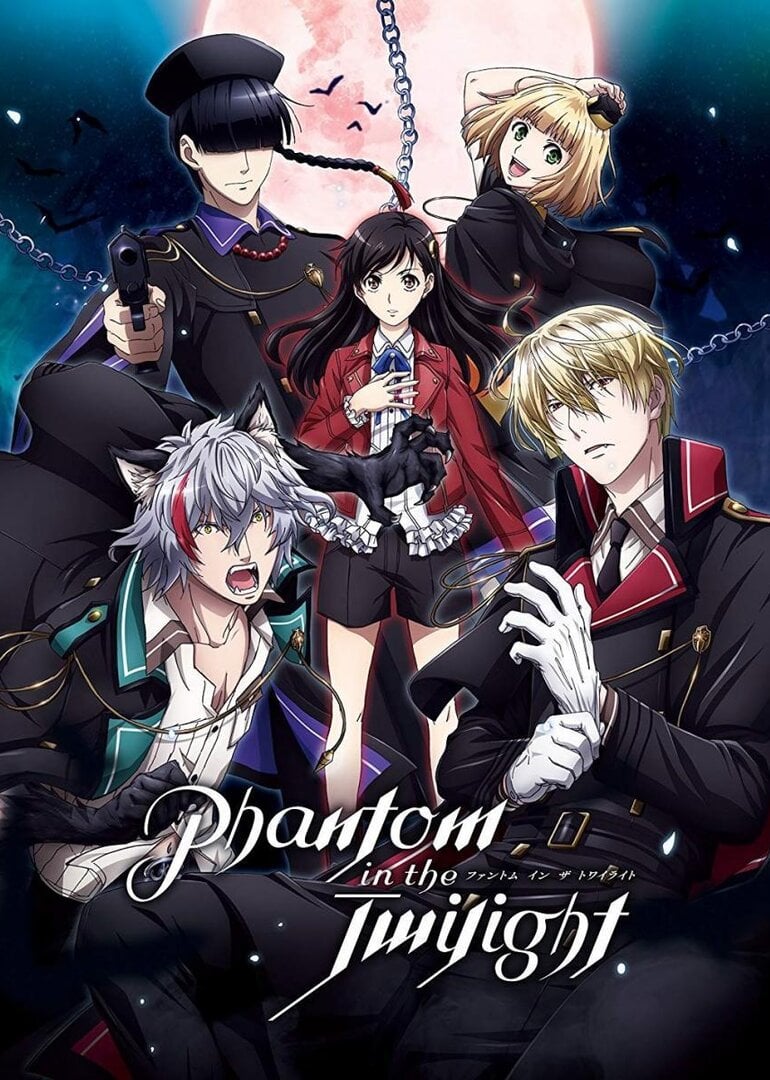 INTRO As a character moderator trainee (at the time), I was left with a less than stellar list of remaining Summer 2018 season anime to choose from. Of the remaining selections, Phantom in the Twilight was what I chose be it good, bad, or indifferent. STORY College students, Bayrou Ton and Mu Shinyao, travel to London, England to study abroad. Little does Ton know that her fate is about to change forever, when on her first night there she stumbles into a small nightly café called Cafe Forbidden. She soon discovers a little about her past and learns about her great-grandmother's history as an Umbra Hunter and her relationship with the Twilights, the purpose of the café, and her newly found abilities that could be pivotal in the fight against the human organization know as the Midnight Sun. The premise sounds interesting, but the series ends up being a let down with too many plot holes. There's just not enough continuity to clearly explain what is going on exactly. Throughout the entire series the characters are still too much of a mystery, which then fails to drive the story. If fangirls are watching it for male eye-candy, then there are ample scenes that feature that. If your watching the show for any purpose other than that or just to give yourself something to-do, then you might find yourself sorely disappointed. One example would be the action scenes. Although usually well animated, they are very lack luster in substance. You never really get a sense of actual danger to the characters in most of the them, or they just end too abruptly and with the greatest of ease. ANIMATION Very inconsisent in both art and in the actual animation itself. The backgrounds are generally good with some of the larger scenic ones looking very good (i.e. the overhead shots of London, England). However, the character quality is too inconsistent. There are too many times where they will look unrefined, then really sharp and detailed, and then unrefined again. This can happen from not just episode to episode, but from scene to scene as well. Both the mediocre art and the crisp looking art can get either really bad or can get enhanced nicely by the inconsistency in the animation; sometimes it's choppy, other times it's fluent. It's aggrevating because you don't know what to expect when coming to a particular scene. When Luke, Vlad, and the "other" Wayne are drawn and animated at their best, the visuals can be quite appealing. SOUND Standard fair. The OP and ED music themes are okay. The music shows it's better moments during certain times of angst and during battles. The sound effects, such as Tauryu's minigun, building explosions, and Luke's werewolf slashes, among others, are solid as well. There's nothing spectacular but just enough to add to each scene appropriately. CHARACTERS The character development is on the weak side, except for Tauryu perhaps in episode four. We at least get a glimpse of his past, prior purpose, and significance to Rijan and now Ton. There are other snippets of character backgrounds astrewed throughout like in episode seven. It shows promise that more character development might be on the way, but then it never really materializes. On the positive side, the characters are relatively likeable and do have some individual personality that add at least a small amount of flair to themselves and the series. CONCLUSION Whether this anime should be written off as an "ignore it" series, a so-so series, or a worth-watching series is hard too say. The final episodes gave a decisive, conclusive ending while keeping it open for another possible season. Personally, I don't see a season two in the future but then again some really really bad anime have had multiple seasons, which Twilight in the Phantom is not the worst by far. In any case, if it does get a season two LIDEN FILMS is going to have to improve upon what they've started here. This isn't a series that will blow you away with amazement, but at the very least it could be one that is entertaining enough to see it all the way through. If you end up watching the entire series because you are a fan of Reverse Harems, then even as a guy I can tell you that there are better anime out there, such as Ouran High School Host Club and Fruits Basket. ENTERTAINMENT SCORE:  6/10 Additional Information: Video Format:  480p Streaming Audio Format:  Japanese Audio (with English subtitles) Publisher:  Crunchyroll Equipment Used:  Lenovo TB-X103F Tablet (with Dolby Atmos)

Wait...Wait a minute. The female protagonist actually does things and speaks for herself? I'm...watching a reverse harem right? (I am quite aware of the protagonist of Ouran High School Host Club) Story So to begin with, Phantom in the Twilight tells the story about two college students by the name of Bayrou Ton and Mu Shinyao that have just arrived to London as they just enrolled in some college there, but things don't go as smoothly when a mysterious being ends up stealing their luggage. Leading our main protagonist, Bayrou Ton, in a wild goose chase in hopes of getting back her luggage, but instead stumbles upon a cafe by the name of Cafe Forbidden. This cafe is run by 4 Umbra dudes, umbras being creatures made out of human fear and anxiety such as vampires, werewolves, goblins and the like. So with the help of our 3 dudes, since one is introduced a bit later,  Vlad the blonde vampire, Tauryu, the human weapon, and Luke, the werewolf, Bayrou finally retrieves her luggage. Since this is anime, of course, the story doesn't end there as our protagonist ends up seeking the help of these 4 dudes once again when she realizes that her friend, Mu Shinyao, has been kidnapped. And that's where our adventure begins!  So storywise, there were quite some unanswered questions left behind by this show. I am not sure if they just wanted to leave it to the viewer's interpretation or were they really plot holes, but they seemed more like plot holes in my opinion. Also, the one that must have bothered me the most was the reason behind Mu Shinyao just suddenly falling into Stockholm Syndrome with her kidnapper. Animation The animation was something...to say the least. Sometimes the London landscapes would look really nice while other times the characters would look inconsistent. At times, you would get these detailed shots of the characters while in different frames the same quality wouldn't remain. Also, there was this CGI monsters that they battled at one point that really threw me off. Characters also had wonky expressions at times, but I think it's fairly decent. The visuals in the OP were also smooth and nice to look at. Sound I am no music expert, but personally I liked the OP song while the ED was fine. The background music did give out the intended atmosphere when it had to and the voice acting was solid as always especially Nobuhiko Okamoto playing Luke Bowen. He never fails to impress me. Characters I would like to give extra points for Bayrou not being a pushover, but I will just say things as they are. As much as I love this cast of characters, I believe they didn't really go through much development with the exception of Tauryu. There was also the inconclusive character arc of Wayne that kind of bothered me throught the show and it was unfortunately never resolved. Despite this, I believe the characters are fairly likeable not making you instantly hate them. In conclusion, the show is okay. It has its flaws here and there but the show isn't terrible. I believe that for the quantity of reverse harems there are there, this one is much more bareable than others such as Diabolik Lovers. If you are into the reverse harem genre, then this one might be to your liking.

I just finished this anime and I liked it. It has a good story and you dont have to see like bakgrond stories and stuff. You just follow the main character through the story. SPOILER!!!! --> its about a girl and her friendn nad they are constant in some danger but there is other characters (boys) that protect them. But then somthing unexpected hapend to the girls.