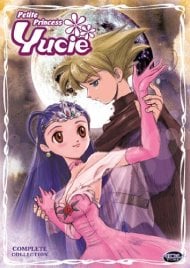 Meet Yucie, a girl under a spell. Yucie wants to be a Platinum Princess, and the only way to do that is to attend the Princess Academy. But that's not as easy as it sounds. Under the guidance of Queen Ercell and with the unwitting help of a schoolmate named Glenda (who just so happens to be a princess from the Demon World,) Yucie finds herself embarking on an epic quest to obtain the Eternal Tiara!

(TLDR at the end.) Before we begin, I want to assure anyone that you don't need to know the original franchise to watch this. The story is completly original and the characters too, even though their appearance references some of the games' characters (But of course, Cube is the only copy-pasted character from the games.) First of all, I did NOT expect for that anime to have such compelling story and characters. I really digged the story and the ending was incredibly heartwarming. Plus, the characters also really grew on me: I still have a problem with Glenda, but she gets enough character development that I can appreciate her. Otherwise, I didn't know if I was on board with the completly new story, but the first episode got my attention and I can assure you it's completly worth-it. Second of all, that anime kept sweeping my expectations away, but in the greatest way possible. The original games could be very... weird, so when I read the reviews about Yuushi's goal, I was sure they were going to sexualise her 10 years old body. And I was absolutely wrong! They really respected her and treated her struggles really well. Also, I didn't expect the romance to be this good, I'm especially surprised at how respectful they were about the lesbian romance. A canon lesbian romance in the 2000's? Very cool! Lastly, my main problem with it is the animation and sound effects. Sometimes, they were too loud to be able to listen to the voices (Plus the voices themselves being annoying at times...) However, this anime was made in the 2000's, so I understand these issues were mainstream, so they aren't unique to Puchi Puri Yuushi. In fact, knowing that, it's kinda charming. TLDR: As a fan of the original games, I can assure you that you don't need knowledge of it to appreciate it and I, in fact, encourage you to watch it. It often sweeped my expectations away in the greatest way possible and the lack in the animation and sound department doesn't ruin the experience at all.

I loved this anime, which surprised me since when I saw the first episodes it didn't seem all that. Infact, after the third episode or so I considered dropping it since it seemed pretty boring and childish to me at the time.However...Story: 9Although the beginning is rather slow paced I continued watching it and was gladly rewarded with a delightful anime full of interesting characters and surprising plot twists.Although the anime is quite slow paced for the first half, the ending makes it all the worthwhile and the reason for the ending being so beautiful and worthwhile is because the anime didn't rush episodes or skip important parts - it took its time building a worthwhile and believable story. Although this risked losing some viewers since a few of the first episodes seem to repeat one another as the heroine Yucie goes on to part time jobs, it does all work towards a fantastic conclusion.Another reason I loved this anime was because of the romance. The love interest for Yucie doesn't actually appear until around episode 6 or 7 which I found unique since in most romance animes the love interests appear within the first episode or so.Infact Ark - the love interest - only appears for two episodes all together for the first of the anime and it's not until around near the end where he takes a major roll. Where as some people may not like this I loved it, it meant it wouldn't be a typical story where it was all romance, romance, romance.If anything, this anime focused more on friendship and the values on it. After watching it I have to be honest that I learnt some things. And although I am usually a hopeless romantic I didn't mind about the lack of romance at times since I was too drawn into how friendship played out - that's how much I loved it.The fact that this anime involves five worlds - human, hell, heaven, fairy and ghost - means it has lots of potential and the anime gives enough time for each world to shine in the spotlight long enough for you to come to know what each world is like.The only reason I knocked a point of the anime for 'story' and didn't give it a full marks is because I felt there were a few bits that could have been explained or explored more such as Yucie's parents.Animation: 6This anime aired many years ago and at times in the animation could be better however the storyline and character included made up for it. :)Although when watching it I couldn't help but keep staring at Ark's eyes since at some moments it looked like he had a big black splodge in the middle of his eye which made me smirk. If anything could have been improved if it was re-made now I would say the eyes since they seemed a bit simple and the colours made more clearer.Sound: 8I loved the opening song of the anime which displayed the beauty of the anime perfectly. The fact that the characters in the anime played a scene where they sang too was a bonus since they all proved to have beautiful voices.As for the casting of voices, I couldn't pick one flaw about it in the Japanese version I watched. Each voice suited the characer perfectly and made them all the more believable.Music involved in scenes suited whatever mood it was perfectly.Characters: 9The characters were amazing.As I said before, I found the first few episodes boring. Another reason for this being that even though Yucie is supposed to be 17 despite looking 10, I couldn't find myself believing that since she acted so childlishly, however as the anime went on she matured and a major part of the storyline in the anime was Yucie trying to act more mature and avoid being called a child.The other characters who played an important part were delightful too, the four other main girls each had their appeals and I found that no character in the anime was alike to another - all of them were completely their own unique self. Plus, since each of the five girls represented one of the worlds with each girl being from one of them it allowed each of them to have developed their own skills depending on the world they lived in and let me see the differences between them considering which world they grew up in.And the fact that all the main characters developed by the end - and when I say 'all' I do mean ALL of them, even the main secondary characters such as the Queen and Yucie's adoptive father as well as various others - made me all the more attached to this anime. The way their relationships grew - again I feel like frienship played a bigger part here than typical romance - and how they all came to feel one another was beautiful and many parts of the anime left me thinking deeply.Overall: 9I would definitly recommend this anime. Upon first watching it may seem like your typical anime and you may think it childlish at times, but the ending is so worth while that there are several episodes that I wouldn't mind re watching.Several episodes come with surprises and the anime does become more serious and emotional as it goes on till it all builds to a great ending.Yucie may look 10 and may act it at times but by the end you'll be able to believe entirely that she is indeed 17 years old.