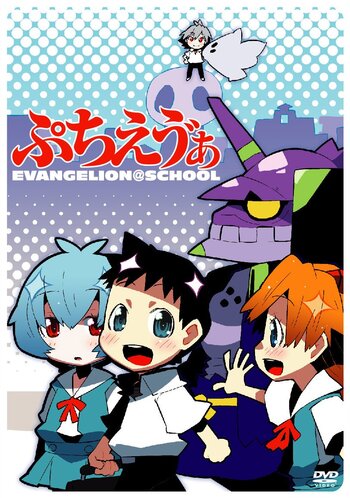 Petit Eva follows a trend to  'chibify' popular shows shedding new and often hilarious light on the established characters. Think Haruhi-chan, or Fullmetal Alchemist OVA where they all have dinner after shooting the film. If there was a franchise that needed to 'lighten up' a bit Evangelion is it - being one of the most depressing and serious animes ever made.

That being said you do not really need to have seen Eva to appreciate Petit Eva - what little there is to appreciate. Very little is carried over from the main series, so self-parody is almost entirely absent (the exception being Gendo Ikari's behaviour at times). Which begs the question: who is this series for? The absence of any connection to the series (and the opportunity for parody) will leave Eva fans disenchanted and disappointed as it is left to rely on low humour (think flicking balls of snot and bird droppings) to fill the void. And if you are not familiar with the series there is not much reason to see it at all as it comes across as another generic random comedy show aimed at the very young for which there are other better shows to fill ones time. (Maybe the joke is the subversion of one of the most adult shows in anime being turned into something aimed at preschoolers - but even that joke isn't very clever or original).

The humour is very much hit or miss...mainly miss. It does have some funny moments but not enough to justify watching the whole series, short though it may be. It sound like I am being overly harsh on Petit Eva even though my expectations were not very high to begin with, but it does have one redeeming feature.

So why should an Eva fan watch (some) of this series? For Chibi Rei and Chibi Asuka of course (oh and Shinji as well I guess...). They are seriously cute both in design and personality which is quiet the relief considering the torture Anno puts them through. Apart from this the animation is pretty average for a 3D anime. Some of the backgrounds are terrible but overall you can't beat a blushing Chibi Rei.

Background music fluctuates between good and average depending on the setting. It does help to add to some of the scenarios but overall its...meh. No voice acting at all which fits the premise well. Not much more to add for this section.

As stated above the only reason one would bother to watch this is to see the iconic Eva characters in hyper-moe mode (approuching inifinite zero :p). It is worth checking out a handful of episodes for this alone if you are into that sought of thing, but if not best stay away.

This show (and this review) shouldn't be taken too seriously*. It won't 'ruin' the series for you but you will get a sense of having truly wasted an hour of your life if you choose to sit through all of it. If you are a diehard Eva fans it's worth checking out a few episodes to see the cute character adaption’s - but chances are if you are a diehard Eva fan this review will be meaningless and you will avoid it like the plague. Which is a shame because chibi Asuka in a plugsuit needs more love :p

*if you DO want to take it seriously replace episodes 25, 26 with Petit Eva for a truly...unique...form of Instrumentality :D