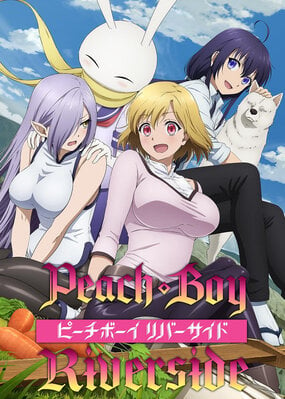 Sartrienne Aldraic, princess of the Kingdom of Aldraic, dreams of traveling the world — a dangerous dream in a land where monsters roam the countryside as they please, and humans live behind high, strong walls. But when a chance meeting with traveler Mikoto gives hope to her dream, he shatters it soon after, as he reveals himself to be none other than Momotaro, ruthless demon-slayer. Though horrified by the gore Momotaro leaves behind, Sartrienne is convinced more than ever that she needs to learn about the world beyond her walls, and journeys out…following the steps of the mysterious, charismatic, terrifying boy she met that day...

Sally and a Crossroads

The Princess and the Peach

Frau and the Vampire

As you may know, Peach Boy Riverside has a rather, let us call it, strange episode order and I do not want to touch upon this in my review and explain who did it and why and how much of incompetent fools these people are, because I feel really sorry for Mr. Cool-kyou Shinja, the king of lewd, whose works I really adore. Anyways, long story short, I will link the correct episode order in the comment section to this review, because linking other websites is not allowed by anime-planet’s review guidelines. Introduction But before starting my review, I think that some might find interesting what I am about to say, as well as the fact that it will also help you to understand the name of this anime. I want to emphasize the following, while there are demon slayers in this anime, it has nothing to do with the Demon Slayer, we all know about. Peach Boy Riverside is based on the legend of Momotarou. The legend of Momotarou focuses on an old lady, who had no children. One day, she was washing her clothes in a river, she saw a peach coming towards her, which was carried by the current. When she brought the fruit back home and tried to open it with her husband, the two found a child, nestled in the peach. Of course, the two were happy to finally be bestowed the opportunity to have a son, whom they named Momotarou. Momo (桃) means a peach in Japanese. With every day, the child was growing and soon he became as strong as a demi-god would be. However, one day, the boy heard that on an island not far from his village, demons were terrorizing the inhabitants. Encouraged by the villagers, Momotarou decided to leave for Onigashima, literally meaning The Demons Island. Momotarou embarked on the quest to save humans from ferocious demons and on his quest he met 3 animals, who joined him. And the first animal to join Momo-san was a dog. In a nutshell Read the manga, it is 1 000 000 better than this joke of an anime. Story The western continent was a lawless land, bursting with demons of all kinds. Out of fear, humans built walls to protect themselves from the invasion of the demon folk. They assembled their warriors and stayed united to be ready to counter the attack of the blood hungry demons. However, the demons were too powerful. Thankfully, the two sides were stuck in a stalemate. Until one day a traveler with a dog came. Will he become the hope of humanity and its savior? Peach Boy Riverside just looks like your usual JRPG story: a princess is tired of her boring and monotonous life, she meets a traveler, who does not have to stay anywhere if he does not want to and is just free to live his life however he wants. Of course, the princess gets jealous and asks him to allow her to travel with him, and so the story starts off. Characters Character wise, the story focuses on the traveler, Kibitsu Mikoto and the princess, Sarutorine Aldike. Unfortunately, the anime does literally nothing to give enough development for any of the characters of Peach Boy Riverside. Criticism Where do I even start? Watching anime should be a process for the viewer to relax and chill, watching their favorite waifu/husbando. Watching an anime, where you supposed to look for episode order is something… weird? Not only does this show mess up the episode order and it is not just 1 episode, it also adds some bloody pointless fan service that you will not even find in the manga. So they have enough time for fan service, but not for character development? All right, they added fan service and messed the episode order, I can still forgive them for that. What I cannot forgive is that they butchered character development of many important for Peach Boy Riverside characters, which made the anime even more confusing, dull, average and boring. Overall All in all, I, as a big fan of Cool-kyou Shinja hope that he will sue the production team of Peach Boy Riverside, because it is just some sort of sabotage. You just cannot be that bad, even some 11 year old kid would have done a much better job than Ueda Shigeru and the team; they are so bad that it is actually bloody hilarious. If I were you, I would drop this joke of an anime and read the manga (which is much better), or you can wait for the final episode order and watch the anime in the correct order. The choice is yours to make. As for me, I adore Peach Boy Riverside manga and hate the anime adaptation. Though, I always tend to hate ‘manga is better’ users, this is the perfect example, when ‘manga is better’ is the perfect tl;dr description for the anime.

pretty basic story, monster nd stuff, the plot is every where so it becomes a bit hard to  mke some sense out of it. we got a op character like in all monster anime so it gets a bit boring . wont be suprised to see ppl drop the series after the first 2-3 episodes as there is basicaly no plot and it is very rushed. rushed endings are understood but it looks likt tthye want to cramp a lot of stuff in the starting few episodes.  should u watch it? maybe , maybe not . its upto u its nothing out of the ordinary

I won't go deep into animation, art, sound or the characters because all of those are OK imo, nothing outstanding but also not the worst (read grusomheds review for more details on those aspects). It would make for an allright anime show around a 4/5 or 8/10 score, wouldn't it be for one thing: the airing order is completely messed up. For some reasons the director thought it would be a great idea to air the episodes in seemingly random order. One reason given was that they didn't wanted to end in the middle of an arc. Which doesn't make sense, since if you have 12 episodes, no matter how much you jumble them around, it will not change the amount of content you are airing. Another reason was to shift the focus of the entire show onto one specific character. Putting aside the issue if you should change the source material, i wil raise the question: did it work to shift the focus ? My answer is a big NO. All focus is lost. The only thing you will be doing while watching is trying to guess at which point in the story we are now and which episode was before the current one and which was after the current (since often we have already seen the epsiode after the current airing). If you're unsure of how impactful this whole issue is to your entertainment, here is how you can recreate Peach Boy Riverside: take any novel you got laying around at home which features one coherent story and has chapters. Now go read chapter 4, then chapter 10, chapter 7, chapter 3, chapter 5, chapter 2, chapter 9, chapter 1. Did you have fun ? My recommendation to anybody interested in this show: wait until it has fully aired, google the 'correct' chronological order, and go watch it in that order. 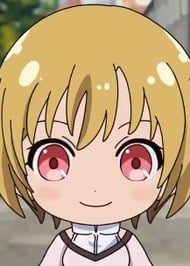 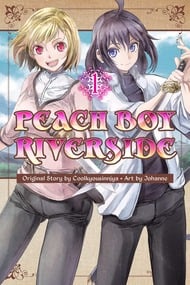