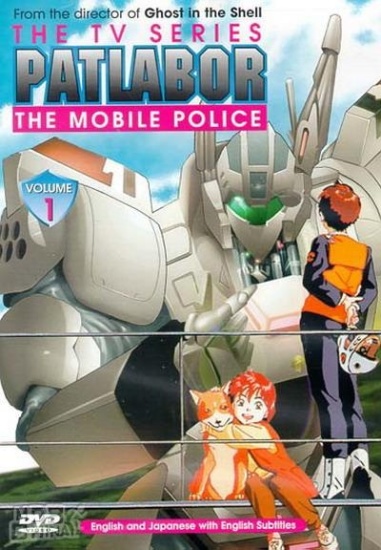 Look! Up in the sky! What is it? Is it a mecha? Is it a comedy? No it’s… Patlabor! That’s what I think every time I hear the title. It appears to be a mecha anime at first but trust me when I say the sci-fi elements are just for show in the core series. I mean, they do matter a lot in the movies but in the original series they are just there to make the police look more eye-captivating and that’s it. You might as well see the robots as fancy police cars and nothing more.

It also appears to be cop show but again that is also just some poor excuse to place the characters into context and to have some action here and there. There is no actual storyline in here; it is just the (almost) everyday lives of a team of futuristic police officers, as they try to have a life and a job.

Then it appears to be a slice-of-life show, since there is nothing grand-scaled going on here and it’s mostly character interaction that matters. Which again it is rather off, since it is not a serious show about the daily lives of normal people either. The characters are specially picked to pilot robots and fight crime, a thing they do rather clumsy.

So it’s a comedy, right? Lots of goofing around and silly people doing stuff? Not really, the comedy is hit or miss. Maybe drama? Nothing concrete because there is no overall story and the humour is watering everything down. Ok, action perhaps? Nope, simplistic spars and training silliness. So what is this anime good for anyway?

Well, the tv version is famous for its character interaction as their main focus, while the movies are famous for their heavy sci-fi themes. And that is pretty much all of it. It was all too unorthodox back then, since Ghost in the Shell was not around yet and slices of life were solely about high school or university students and their romantic interests. Patlabor felt special by being about cops who are NOT chasing criminals but just do paperwork and try to live by in their simple lives. Getting enough money for booze is for them harder than fending of aliens in classic mecha shows. The production values are also very good for its time and that helps to like the cast and the setting easier.

To be frank, I never liked the premise much. As unorthodox as it may have been for its time I still found it aimless and boring without some good action or an on-going plot. Even the character immersion falls short because of the episodic nature of the show. As for its scenario themes, I found Ghost in the Shell using them in a much better way. The daily lives of the defenders were also portrayed far better in another mecha anime named Daiguard. So as much historical value as it may have, it still fells uninteresting because of its simplistic take on a genre most are affiliated with for its action and interesting sci-fi themes. It may be a nice time killer if your expectations are not high but I have already watched much better alternatives.

VALUE SECTION: 6/10
Historical Value 2/3 (famous retro title)
Rewatchability 1/3 (low because of too much episodic pacing)
Memorability 3/4 (unorthodox for its time but not that special today)

ENJOYMENT SECTION: 3/10
It would be great with some plot and heavy action. 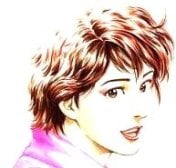 Background-In the late 1980's the world's polar ice caps are melting due to global warming and thus causing water level to increase. With the threat of water levels rising to coastal areas like Tokyo they started the Babylon project in the early 1990's. The Babylon project is a plan to build a barrier to prevent the sea from taking the land. But thanks to the rapidly development of hyper-technology, a humanoid machine called “LABOR” is being used to help project Babylon and in almost every field of the industry. However,it has also created the new social menace of “LABOR” crime. In order to curb such crimes from happening one after another, the Metropolitan Police Department has established a special department, the “Special Vehicle Section no.2”. It consists of a company of patrol “LABOR” known as PATLABOR.

Sound-IMO I thought Patlabor had a great cast for voice acting in Jpn or Eng. The eng dubs weren't horrific but then again they weren't great. To me I thought the eng dubs were alright but others may not stand it since some of the characters do sound annoying(ex. Noa’s hi-pitched voice) The sound track on the other hand was perfect to me. The Op "Sono mama no Kimi de Ite" is always catchy when the singer hits the lines "Hang tight onto your dreams- they're weapons in your arsenal" But as said before some people might not enjoy the sound track since it does sound out dated compared today.

Art- To me this is when the anime industry was blazing with anime and its art. The cast of characters looks great and the mechs looks wonderful. The construction Labors in patlabor don't look the best since they are used for simple purposes. But the police mechas or Patlabors used look great. The main Patlabors have a certain design that makes them look extremely cool to fans like me. Maybe its the police sirens? Maybe its the head designs? Maybe its the cherry blossom on the chest? Maybe the realism involved? I would say the realism but that's just me.

Story- Patlabor is set in 2 universes 1 being the tv and other being the Movie. In the tv ver the story starts with the Old police mech trashed so the Captain sends Asuma and Ohta to go deliver the trashed Patlabor back to Shinohara heavy industry. While their they meet a young cadet named Noa who is there to take a labor test. But while there some thugs steal the new Ingram. So Noa runs after them with Asuma and Ohta following her. To me their is pretty much no story plot as it just follows SV2 solving mech crimes with comedy attached. Sure 1 or 2 episodes continue where the last 1 left off but for the most part they don’t have a permanent story. But the thing that attracts me the most is the comedy used in Patlabor. In a few episodes of the series they spin off to something that don’t involve any mech fights or crime at all. Like one of the laughable episodes the SV2 has to spend a night in a huanted house and on a more serious episode the 2 ingrams face off against a Dragon.

Cast- This has to have some of the most loveable characters out of the all the manga/anime i read in my life time. The main cast is Noa who is the pilot Ingram 1/easy going labor otaku(named unit 1 Alphonse) ,Asuma the foward of Unit 1/kinda short tempered but mostly positive ,Goto the captain of SV2/pretty much always laided back but can be quite a strategist, Ohta is the pilot of Ingram 2,/shoot now and ask questions later type of guy,Kanuka the NYPD loan to Sv2 and the forward to unit 2/competent officer who does everything by the book, Kumagami the replacement for Kanuka(forward to unit 2) when she leaves/overall nice and noting seems to bother her but is easily scared by the super natural, Shinshi driver to Unit 2's carrier/hes kinda like Bruce Banner who is nice and calm but if angered enough..., Hiromi the driver for unit 1's carrier/considered the shy gentle giant or Sv2,Sakaki the head mechanic/generally nice but can get angered easily,Shige 2nd in command for the mechanic/nice guy to hang around but knows how to get carry overboard easily and lastly Shinbou the captain of Sv1/pretty much the perfect officer who is always on the job and never loses her cool. Those are pretty much the roles/personalty of the cast in Patlabor

Conclusion- Patlabor to me has to be one of those hidden gems buried in the desert. It is an amazing series with excellent characters, plots which range from absurd comedies to political drama, wonderfully designed mecha, and a sense of realism which you don't find in most robot anime. So if you are looking for some comedy,mech,or maybe comedy and mecha mixed together? Then Patlabor is a must watch for you.