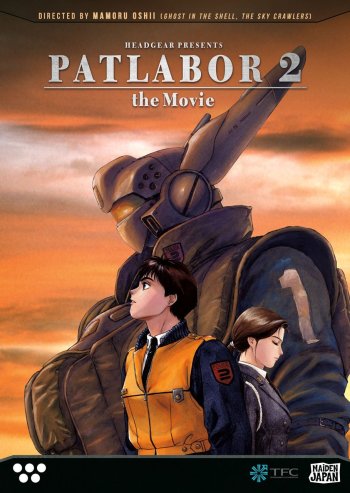 This is from author Masami Yuki, also known for Birdy the Mighty: Decode and director Mamoru Oshii, best known for also directing the acclaimed Ghost in the Shell Movie. You'll find some mecha designs & technology that seem to be precursors for Ghost in the Shell.

I should mention that there are 2 different timelines:

Note that this Prequel OVA is where all the characters are introduced, but despite having excellent animation for its time, the plot and antics are just average and leaning more towards comedy and slice-of-life than to action, so it's up to you to decide to watch it. It's episodic, focusing on the training of the characters. The plot is not essential for watching for the movies, although getting to know the world, character's personalities, and their backstories do help to identify them and expand their world. It could also be watched at a later time.

The mecha on this series is treated as 'real-life mecha', no more than machines meant to serve a purpose and they are not the focus of the show.

This is a classic anime and one that is still worth watching!

Each movie story is self-contained and their story is completely independent of the rest of the series, except that it is still the same universe with the same characters. The movies are like an extended episode of the series and one of the best, as they have plenty of action, detective work, politics, and an even more impressive animation that still outclass most current animes today.

As I mentioned above, this is a continuation but also a self-contained story and you don't need to watch anything prior in order to understand it.

This movie has very little action and an even more serious tone than the rest of this series. The enjoyment is more about the intricate plot and the philosophy and ideas that are trying to convey, full of social critique. So if this is not your thing you may want to pass on this movie.

"Most of the prevailing theme in the movie has been cast on the Japanese Self-Defense Forces and on their legality as Japan's military force..." -Wikipedia

"Several real-life incidents were also mentioned or used for the movie. For instance, references to Viktor Belenko's defection to Japan in 1976 were mentioned by Arakawa himself when he spoke to Goto and Nagumo. Another incident with the nearly fatal dogfight over Tokyo was supposedly based on an accident in a computer simulation that forced the US military to go onto DEFCON 3 and almost went to nuclear war with the Soviet Union." -Wikipedia

The dub is good.