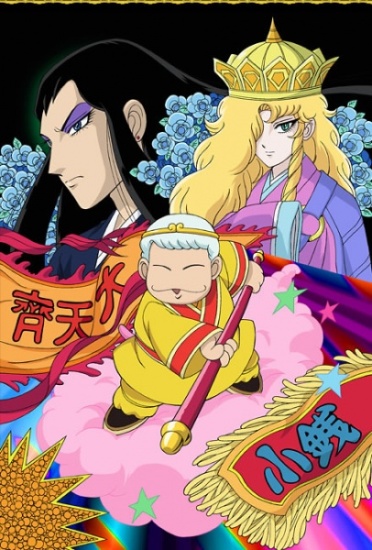 I actually fell very hard for this anime, despite its dated art style-- dare I say, it was actually one of the more romantic m/m animes I've watched.

But despite the art, you still end up really getting into the story. Saiyuki is a very old legend which has been depicted in many different interpretations as TV series, films, stage plays, anime, etc-- and this is one of them. It's a good story because it's based on a good legend-- it's not just some dumb, formulaic plot that many other animes have. What this version has going for it is that it's genuinely romantic; most BL/yaoi animes are sadly quite short-- most of them are OVAs with only one or two episodes, but this one goes on for 26 eps. Granted, they're each only about 10 minutes, but that's still much longer than your usual BL anime runs.

So, as a consequence, you end up getting attached to the characters and really feeling for them; also, with a story of this length the plot actually has a chance to develop a proper romance-- you actually get feelings of longing. It's maybe a tiny bit like the romance in Sailor Moon, where at first Tuxedo Mask only shows up now and then, and you end up wanting him and Sailor Moon to get together and so on-- except in this one it's m/m.

And personally I also really liked the charcter of Genjou Sanzou; he's one of those soft-spoken, elegant, gentle pretty boys like Su-Won from Akatsuki no Yona or Seravi from Akazukin ChaCha.