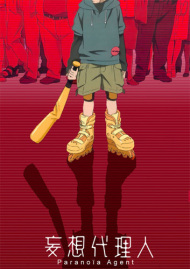 Paranoia Agent is Satoshi Kon's only TV series, a curveball from his usual M.O. of doing films. Like several of his other works, it strives to confuse between reality and fantasy, often doing so by showing the world as perceived by the characters. Paranoia Agent is, in whole, a story of escapism, how society is falling further into it, and the negative consequences that will follow. The plot begins as Tsukiko Sagi, a woman responsible for designing the well-known plush toy dog Maromi, is being pushed to create a new design, and is rapidly succumbing to stress. On the way home, in desperate need of a way out, she is suddenly attacked by a boy on rollerskates with a baseball bat. At first, the police don't believe her, and think she is making up excuses, but before long, other people are attacked by the boy now dubbed Shonen Bat (Little Slugger in the English dub). As the series progresses, we see how rumour and truth become distorted, and how Shonen Bat goes from a mysterious attacker into something far, far worse. All of this leading back to the question... just who, or what, is Shonen Bat? What follows is 13 episodes of social commentary, clever writing, bizarre stream-of-consciousness mindtrips that blur the lines of perception and reality to both the cast and the audience, and overall mystery. Paranoia Agent manages to throw an interesting spin on what initially appears to be a whodunnit thriller. It does, on multiple occasions, dip its toes into the psychological horror genre, and when it does, it does so excellently. These aspects of it make great use of how the audience often does not know how much is real and how much is fantasy, and as a result manage to make some truly creepy moments. Most notably, Maromi is insanely creepy. Yes, Maromi, the little stuffed dog mascot thing. You heard me. In technical terms, Paranoia Agent is Satoshi Kon, Madhouse and Susumu Hirasawa all coming together on one project, which inevitably means it will excel in every single one of these aspects. The art is a strangely realistic style, if often somewhat exaggerated. The animation is completely fluid throughout the series, and is surprisingly produced to much the same level of high quality as Kon's movies are. The directing is, of course, top-notch, and as mentioned before Kon is a genius at blending reality and delusion in such a way that you often have to take a second to wonder what's going on, in the best way possible of course. The English Dub is excellent, and while nobody really sticks out, it's definitely one I'd recommend over the original Japanese track. The music is often very cheerful, and this is used as juxtaposition against the events of the series, creating something downright weird in the process. In particular, the opening and ending themes are some of the most unsettling things ever shown in anime. Paranoia Agent does have some flaws, mind you. One is in the pacing. It's entirely possible that Kon's lack of experience (or transition into) the medium of a TV series caused this, but around the middle, a lot of the episodes don't really seem to tie in to the plot. Rather, they come across as episodes that strengthen the point of the series, but don't really lend themselves to it as a story. This is easily forgiveable in that the episodes in question are quite strong in their own right (and in some instances, oddly comedic). Another valid, yet easily forgiveable fault that the series has is that in its switching between the real and unreal, it takes some steps that seriously raise disbelief. In general, it's all done for the sake of a clever metaphor, but it's something that will undoubtedly nag at the back of the mind, especially at the ending, which is a rather monumental example of this. Overall, Paranoia Agent is an extremely clever series. It's probably the most accessible thing in Kon's discography, if not necessarily (though quite arguably) his strongest. It's been described as a mindfuck series, but I'm not entirely sure it would fit into that category. For the most part, it is a realistic and grounded setting in which abnormal elements are introduced, and barring the aforementioned dips from reality it mostly stays that way. Regardless, Paranoia Agent is one of those anime I would definitely recommend to pretty much anyone, especially those into psychology, who would most likely love it for its insights and observations of the human condition. Animation/Graphics: 10/10 Story/Plot: 8/10 Music/Background: 10/10 English Dub: 9/10 Overall: 9/10 For Fans Of: Paprika, Boogiepop Phantom. 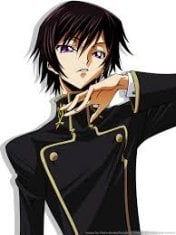 To be honest, I really wanted to like Paranoia Agent. I like the mindf*ck genre a lot and tends to be a favorite of mine. This was recommended by a friend of mine and I tried to watch it 3 separate times and now I finally stuck with it and was surprisingly disappointed in the whole thing. The story is: Shounen Bat is a kid who wears gold roller blades and a baseball hat. He likes to hit people over the head with a kinked golden baseball bat. The police take on an investigation to try and catch Shounen Bat, but matters prove to go deeper than just a mere kid who hits people with a baseball bat. Did you ever get so stressed and feel cornered from the weight of everyday life? Paranoia Agent plays on this theme pretty heavily and had tons of potential to fully explore a theme like this, but never quite rounds second base. The story starts out great. Very creepy vibe and makes you wonder what is going on. However, after about episode 5 is where things start to make, practically, no sense. The middle starts with the so-called "filler" episodes that have, honestly, nothing to do with the main story and loses itself until the last couple of episodes. The last episodes feel rushed and full of wasted potential due to the useless filler episodes that plagued the middle of this series. Paranoia Agent took a chance to try out a theme that speaks to all people because we all feel like we are being cornered by life. It didn't fully realize that potential nor did it really stick with that mind frame throughout and resulted in: BEGINNING- Great premise and sense of fear, MIDDLE- Fillers with no connection to the main plot, END- Rushed and feels like corners were cut. The animation felt very simple. I'm no animation expert, I'm a storyline and character analyst, so animation isn't ncessarily my specialty. I didn't mind it other than I believe it could've been better. You can definitely tell they cut corners towards the end it's almost hilariously sad. It started off great, but throughout the course of the 13 episodes, you can tell it starts to fall apart the further in you get. The sound was hit or miss for the most part. When it wanted to be creepy, it could be. Only problem is that the further into the series you get, those moments become further and further apart until they don't happen anymore. The opening theme, in my opinion, set the tone for the show because it's kind of mentally insane. The closing theme is more soft and calming. It's nothing special, but it works for this show. The voice overs were fantastic for some of the characters, but otherwise I'd leave it at mediocre. Characters in Paranoia Agent are, frankly, just not that interesting. The only people that had any kind of growth were Shounen Bat and the Chief's wife. Everyone else was very one-sided, one-dimensional, and never showed any intent to stand out as a character to be remembered. Except for Maromi. How could you forget that creepy/cute pink dog?! I didn't really care for most of the characters because of what I stated earlier, but some of them didn't really play as much of a role as I felt they should've or some of the characters were just unecessarily there with no purpose to the story. I am a strong believer in having characters become the story. You can tell a crap story with strong/memorable chracters, but it doesn't work with a brilliant story with crap characters, then it just feels like a great story was wasted. All-in-all, the characters are mostly un-important and serve no real purpose in bringing Paranoia Agent to it's full potential. Overall I wouldn't say Paranoia Agent was the most terrible anime ever. It was more disappointing than anything. It had a lot of potential to be something that could've really stood out in the crowd. It took themes that everyone can relate to and tried to make a great story out of it. Instead it failed in realizing where they wanted it to go as a whole which resulted in something that started out truly excellent, then it slipped and fell not realizing it can't get back up, but when it does get back up, it does so too quickly resulting in slipping again. There are a lot of people that like this anime, I thought/hoped to be one of them, but sadly, I can't really join that crowd. Paranoia Agent isn't bad, I wouldn't really recommend it personally. I say at least watch it because a lot of people do like it and see where you stand on this anime.