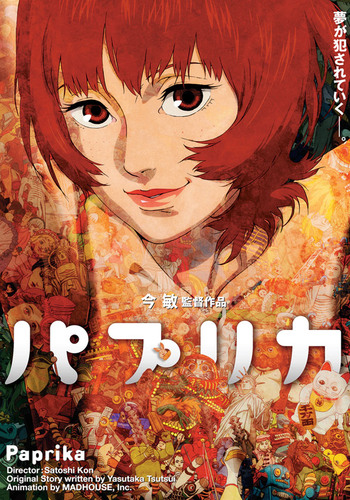 In Japan, a team of scientists have created a medical breakthrough: a device that allows the wearer to enter the dreams of a patient, for the purpose of healing. The talented Paprika is a master at her profession, but complications have now appeared in the form of a “dream terrorist” – an unknown foe who inserts nightmares into the minds of those who use the device. The victims are swept up in a ghoulish parade of dolls, kitchen appliances, and musical animals, and are reduced to a vegetable state – or worse. Now, Paprika and the team of scientists must delve into the minds of those affected to figure out the source of the tampering before more people, including themselves, are damaged beyond repair.

StoryUnderstanding is overrated. Incomprehensibility is the new clarity, and contradictions are the new consistency. Confused? Good, so am I. Some stories can only be enjoyed through understanding, while others must be enjoyed through experiencing. Paprika, for one, firmly falls in the second category. Comprehending Paprika on an intellectual level is comparable to nailing Jell-O to a wall: the harder a person tries, the more hopelessly confused he’ll become. Those familiar with Satoshi Kon’s other works (particularly Perfect Blue and Millennium Actress) should already be well acquainted with this visceral style of storytelling. Put simply, Kon’s trademark style has always been to set up his film with an interesting, easily understandable premise. From there, however, his films transcend into delightfully illogical chaos. One can try to shoe-horn isolated scenes from his films into a linear, understandable narrative, but the result only serves to sidestep the director’s true intentions. Paprika is no exception to this; near the end, the movie’s literal events become as intellectually inscrutable as a Teletubbies episode. That is not to say that Paprika’s story is meaningless or brainless. On the contrary, it’s a wickedly funny, incisively intelligent, and thoroughly absorbing work. Paprika’s central focus is the tenuous border between dreams and reality, which is certainly not new in anime (or any other medium, for that matter). However, the sheer brilliance of the film’s execution prevents the show from ever drifting into clichéd territory. There is something exhilarating about the way the film slowly weaves reality and illusion together to eventually form a cohesive, turbulent whole. In the end, I think a lot of people make the mistake of trying to analyze Kon’s work on a literal scene by scene basis rather than looking for general themes that the director is going for. In this case, Paprika really seems to be about humanity’s constant battle between its conscious and subconscious thoughts. Most of us like to think that we are consciously in control of our decisions, but in fact, our id plays a much larger role in our decisions than most of us would care to admit. To do this, Kon created a plot that plays like a dream itself. Objectivity battles with subjectivity, consciousness battles with the id, and illusion battles with reality. The result is fantastically engaging.AnimationThe animation serves as a key component to the storyline. Much of the film revolves around the dream world, and Paprika’s visuals beautifully flesh the characters’ dreams out in a way that only an animated film could do justice. The importance of the animation further deepens later on as the border between reality and hallucination becomes less and less indistinct. In the movie’s own way, Paprika is able to show this gradual merging (and the subsequent chaos) vividly. There are only so many synonyms for “brilliant,” but Paprika’s animation deserves them all. In creating stunning visuals to drive the story, Kon is indisputably a master of his craft. The visuals are a captivating mix of subversive humor, nightmarish insanity and unprecedented wonder; this will almost certainly be the best animation of 2007.SoundSusumu Hirasawa has been an impressive composer for some time, but for Paprika’s soundtrack, he surpasses pretty much anything he’s produced up until now. Both “The Girl in Byakkoya” and “Parade,” the two major musical themes to the film, are fantastic electronic tracks, and have become some of my favorite anime songs of all time. Unfortunately, there isn’t enough to the soundtrack. For one, I would have liked to see more variety in the music. Almost every song in the movie is only a slightly different take on the aforementioned themes, and even one more completely different song would have helped the show out considerably. Also, the soundtrack just isn’t used enough. Kon purposefully restricts Hirasawa’s music to only the most frenetic scenes, and uses silence for a large majority of the film. While this helps make some of the scenes stand out more, other parts feel dry by comparison. Even some subtle ambient tracks would have helped tremendously. Still, what’s there is amazing, and fits the show perfectly. Voice acting is competent, although nothing particularly stands out.CharactersMost of the time in experimental films like Paprika, the characters are too weird and underdeveloped to ever be a particularly strong part of the show. For the most part, Paprika follows this rule. However, the film perhaps fares a bit better than most due to a couple of characters that actually have some meat to them. The first is Dr. Atsuko Chiba and her dream alter-ego, Paprika. In real life Atsuko is cold, unfriendly and stiff, a sharp contrast to Paprika’s bubbly, warm-hearted persona. This creates a fair bit of intrigue. Is Paprika merely a repressed part of Atsuko’s subconscious, or are they actually two different personalities? The interesting questions this brings up (particularly, how much of our personality is dictated by society) help make up for a lack of actual development. The second is detective Keiichi Ikari, the only character to be legitimately developed over the course of the show. His arc, which involves a fear of cinema, is a nice diversion from the concentrated madness of the rest of the movie (unlike the main narrative, the sideplot has a clear beginning and end). While his character isn’t particularly likeable or unique, he helps add some depth to an otherwise shallow cast.OverallSome are going to try to push Paprika as a complex and intricately plotted intellectual exercise, while others will deride it as nothing more than a little eye-candy. In my view, the show is neither of these. There is a lot going on behind the stunning visuals, but only those who check their objectivity in at the door will be able to experience it.

Before we begin, I haven't seen Inception, but I have seen Dreamscape. Which, if you want to see Paprika in live action, is probably the best choice. Note: the reviewer holds no responsibility for feelings of a bad-acid trip while watching Dreamscape or Paprika. Story: This movie came highly recommended, and was on several "required watching" lists for variuos conventions. As much as I love a good, quirky, psychological plot...The story is a bit convoluted, and diploys a tactic of multiple layers to keep suspence potent. To start out, the team of scientists are attempting to perform dream-therapy on various individuals by sharing their dreams. Then, some sort of dream-terrorist starts trapping people in parades of ridiculous things. At this point, it becomes a closed-door mystery because only the scientists and their funders know about the dream-sharing-device. Then, instead of honoring closed-door-mystery style of finger-pointing and the killing off of unimportant side-characters, the plot side-steps to give those side-characters some backstory. Because, why not? Animation: I once read a book where someone had to show a great-spectical of magic. Instead of producing some giant magical thing, they animate a bunch of small objects in an intricate dance around their head. The animation style of Paprika is like that. It's beautiful, and definitely a great feat of animation, but it's not the bells and whistles you'd expect from something that involves dreams. Sound: This is probably suitable for a dreamland-esque adventure. There is one sequence of Paprika running around the city that is very lyrical, and I enjoyed that. I had the english-dubbed version, but for once I wasn't completely annoyed by the choice of voice actors. Characters: The characters were... cliche, I guess. I didn't really connect with any of them, to be honest. The main character is the stereotypical, uptight, repressed businesswoman with an alter-ego I've seen a bazillion times in various genres. The cop with a heart-of-gold, and the childish-genius are two other examples of how little thought was put into their character designs. Overall: It was entertaining, but not something I'd tell you to go find right-this-instance and watch. 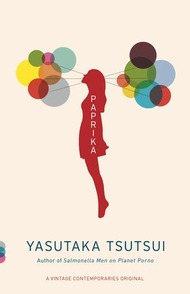 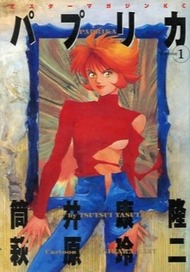