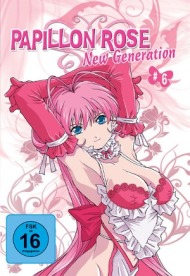 StoryMy taste in anime, more specifically ecchi anime, is usually nothing to be sheepish about at home. I will shamelessly have 38GG animated breasts undulating across the plasma television without a second thought of who will see it or what they will think. Surprisingly, it was with utter relief I was home alone to watch the sleazy and downright repugnant Lingerie Senshi Papillon Rose, as something this grotesque could well have tarnished my (mostly innocent) halo. The show starts with two mindless bimbos working in a Japanese lingerie club – using their inflated assets, the girls entertain and pleasure their morally devoid customers. Tsubomi, the pink haired heroine of the show, is a headstrong and brazen brat. Apparently still in school despite her questionable career choice, she has a well developed body and seriously underdeveloped brain. Stumbling into a handsome stranger in the street, a quick cut-scene sees the two “bumping uglies” in a love hotel. As the mysterious bishounen sows his seed in the slack pantied Tsubomi, her inner soldier awakens ready to fight for justice and sexual energy. Thinking this would be the low-point of the show, my assumptions were proved horrifically wrong as the show degenerated even further. Enter the super-villains – a group of stereotyped, gargantuan breasted women – intent on causing chaos and forming an erotic dynasty. The evil Beene is sent to dispatch with the owner of the gentleman’s club in the most imaginative and bizarre way possible. Seeing her boss “sucked dry” causes Tsubomi to lose what little clothing she was wearing and transform into Papillon Rose. The story passes the point of no return as the scantily-clad lingerie soldier battles the orally adept enemy; pulling out a pink vibrator from her crotch, she starts beating down the opposing fembots with a cry “Rose orgasm power! Erection!”... Aside from the poor scripting and barefaced innuendo, the show is homage to the magical shoujo genre, more specifically Sailor Moon. Riding on the success of its predecessor, Lingerie Senshi Papillon Rose visually assaults the viewer with derogatory scenes straight out of a depraved doujinshi. Muddling its way through a copious amount of perverted scenes, the parody is lost as comedy takes a back seat to an animated peep show. Unless you’ve ever wanted to watch Tuxedo Mask have his wicked way with Sailor Moon, there is nothing in this show to attract even the most hardened ecchi fan.AnimationWhilst the vibrant colours and clean lines are typical of modern animation, there are some awkward moments that seem unnatural. This is most apparent during some of the tacky foreplay and raunchy fight scenes, with lips continuing to move as the characters stop speaking. The fan boy origins of the show are very apparent; the transformation is scene a blatant copy of Sailor Moon, and the well endowed characters bear more than a passing resemblance to the Sailor Stars. Just as the game Dead or Alive was celebrated for its realistic boob buoyancy, Lingerie Senshi bucks the trend and revels in some questionable gravity effects. With a persistent rebound, the breasts are worth a show of their own. Lacking the satirical cup-size of Eiken, the artwork comes across as gross and unnecessary – looking more like kinky schoolboy scribblings than professionally produced animation.SoundA surprisingly upbeat and catchy opening gives way to some funky incidental music supporting the transformation scenes. In all honesty, the soundtrack is well produced, fitting the shoujo charm perfectly. What let the score down are the atrocious voice overacting and diabolical scripting. With a fake orgasm that would make Meg Ryan blush, Tsubomi moans and whimpers her way through some of the most ludicrous special attacks. Cringing through the shout of “Rose pinkish Viagra”, and hearing her wish to join in with some sexual misadventure, the viewer will be left red faced at the vacuous babble of the horny heroine.CharactersWith characters already well established in Sailor Moon, this parody seeks to promote the saucy side of their personalities. Unfortunately the effect of increasing the bra size causes the frivolous females to become even more vacant and airheaded. With the focus of the show entirely on the erotic exploits of the ditzy Tsubomi, the viewer is left with no character background and zero development. Her lewd behaviour gives the impression of a nymphomaniac, with no redeeming qualities. With a supporting cast not even worthy of a mention, Lingerie Senshi is seriously lacking in the character department. Expecting more from the gallant Dandylion, it seems that the masculine component of the cast is equally susceptible to the dumbing-down disease. Having a questionable relationship with a cat, it seems he will not turn down any offer of tail. Literally.OverallOn the surface, Lingerie Senshi Papillon Rose seems like a harmless magical girl spoof; I went in with expectations of laughter and enjoyment – being able to giggle at inside jokes and enjoying some superficial fluff. Instead, the show descends into a perverted abomination that forsakes the witty spirit of a frolicsome genre, blurring the line between ecchi and hentai. If you’re looking for some mindless fun, give this one a wide berth as there is too much mindlessness and just not enough fun.

I've watched this anime because of the DTAB (Damn, That Anime is Bad) event #59. But this anime was surprisingly good, while the synopsis and rating let us think otherwise. First of all, don't watch this expecting a serious magical girl show. Expect exaggerated sex jokes as a parody on Sailor Moon. And don't worry, the sex jokes are really really ridiculous and go pretty far but it won't become a hentai, however do expect plenty of nekked boobies, nekked, bouncing boobies. Story The synopsis says enough already about the story, lingerie babe Tsubomi has to save the world of a bunch of evil women who try to suck guys dry through a hose for some unknown reason. After meeting Hikaru aka Dandelion and sleeping with him on first sight she encounters a talking cat who smells his... uhm...''sweet smell'' from her nether regions. This leads to Tsubomi becoming Lingerie Senshi Papillon Rose. And through her Viagra and Vibrator attack she has to defeat the evil women. Ridiculous but pretty darn funny. The only thing I've got problems with is that this OVA does not have an ending, she defeats one of the women and the rest is still out there. This might be covered in the 6 episode series which followed but this OVA is only half a story, hence only half the score is given. Animation I’m really bad at spotting flaws usually but I noticed the mouth movements don't match up with the sounds. Besides that also a few other minor flaws. So it wasn't good but not entirely bad. The bouncing boobs and ecchi shots were funny and probably intended that way as part of the parody. Sound It has a great opening song, but that made the ending song a little disappointing. Most of the music wasn't noticeable but a few occasions the really cheesy music made me laugh. The same with the voice acting, especially those evil laughs. Characters Dandelion is the out of closet pervert, having sex with random girls in love motels and ditching them with the bills. Or using his ''special attack'' and don't forget his love for his cat, which goes really far. That love went a little too far in my opinion but the cat didn't seem to mind so I guess it is okay. Then there is green lady with the red hand bikini who wants to suck all men dry through a hose. Which apparently is evil? The talking cat with a condom around its tail who somehow gives Tsubomi super sailor moon sex powers. And last but not least Tsubomi herself, the funniest character, always optimistic, late and loves sex. Overall As said don't expect a serious anime and be prepared for raunchy sex jokes with a bunch of naked boobs. You do not need to have seen Sailor Moon, it will make you see some new jokes but even without those inside jokes this OVA is still very funny because of the over the top jokes. This OVA definitely deserves a slightly higher score, not too high though. I guess some people got offended or appalled by the amount of nudity, sex jokes, the vibrator weapon and the happy ending with the cat. But that is exactly my kind of humour, like the 'sunblock' attack of Dandelion on the green evil magical girl. ''Yes officier, I swear that was just sunblock''. How the hell did the writers came up with such kind of joke? I can already imagine him standing there watching the entire battle, or does he carry around a supply? Haha, that was a sick joke from the writers. My thoughts on this show captured in 1 picture:

Anime in 200 Words: Lingerie Senshi Papillion Rose Premise: Lingerie Senshi Papillion Moon is an ecchi Sailor Moon, equal parts magical girl parody and fan service. A well-endowed young woman gets magical powers and has to stop the villains from stealing all of the sexual energy of the world or something. Audience: Those guys who watched Sailor Moon and similar shows for the transformation sequences and the spinning, sparkly nudity therein. Characters: Let’s face it: no one is watching this anime for stunning character development or vivid back-stories, so there aren’t any. Why waste time on that when you could spend that time naming her attacks? Plausibility: If you like realism, don’t watch this. No, seriously; it’s both ecchi and magical girl! What are you thinking?!? Magical Powers: Instead of a wand or staff, Papillion Rose wields a vibrator. Most magical girls have attacks with ridiculous names, so it shouldn’t be terribly surprising that her attacks also have absurd titles, with a perverted twist. I’m pretty sure that the word ”orgasm” is in there somewhere. Overall: This really is like a Sailor Moon fanboy’s dream, or it would be if it lasted for several seasons and had an ever-widening cast. 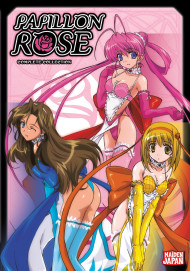