Papa to Kiss in the Dark - Reviews 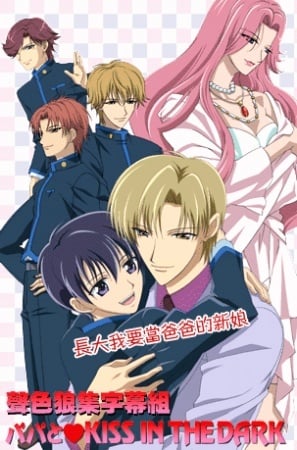 I found this anime innately creepy. Either I'm misunderstanding a pretty major concept, or this anime is one of the most perverted ones I've ever seen, because it appears to feature shota-con. The relationships were all creepy, namely the one between Mira and Kyousuke because of their significant age gap, as well as the implication they have been having sex for a long time. I didn't really let myself like this anime because of the implicit paedophilia, but it was okay.

Really sad when an animes truly standout quality is it's music and sounds. Now I debated wheter or not I should add this to the list of animes I've watched, but oh what the hell. Since I wasted time to watch this I might as well write a review also. This anime is wrong on so many levels, OK? You're going to accept this first of all no matter how you try to justify it.

So you have this character that's raised by his "father" and I'm guessing the father bones him from a young age (here goes Japan with the pedophilia again). Not too long after we're sidetracked with some cute, but rather bland characters, the MC finds out that his "dad" isn't his biological father (shocking said absolutely no one). At this point I'd say he should be relieved and can go on to have a normal healthy relationship with this man, but I soon remember that this is a 15 year that took comfort in his 29 year old "dad" turning his cherry out . Later we find out that the "dad" isn't just some random creep that adopted some random kid to raise as a personal sex slave ( I was hoping it'd go along this line because why the hell not?!), but actually the kids uncle! Yay! You're still related to the guy who's fucking you cause family! So now you basically have a guy fucking his sisters kid/nephew! How delightful because we're all in this together! Part of me wants to believe that the mother has no idea that this has been going on, but then again they're a pretty fucked up family to begin with so it wouldn't be a surprise if she knew. The moral of this story is don't let your family raise your kids because incest! And underage sex! And anime logic! Will recommend this to the people I hate.

Okay, so I don't normally write reviews for anime, usually the summary can tell you the gist of it anyways, but this anime is different. Papa to kiss in the dark is a literal roller coaster. I would be surprised if the person who created it wasn't on something the entire time it was in the making, but that's not to say that it's bad or anything. It honestly has a good plot (kinda), and if you can get over the fact that the two main character's are related then it's actually a really sweet relationship. If you want my honest opinion if you're even a little bit curious then watch it. It's only like two episodes long so Yolo am I rite. (Don't mind that bit of cringe.) Maybe an hour of your time wasted is really worth this beautiful creation. And if you're looking at the reviews then you're probably not doing anything to productive anyways. I might have stumbled upon it by accident but God damn I don't regret it. Hopefully you won't either (or you will regret it. That's up to you.)

P.S. I don't endorse anything this anime talks about, the incest and age range is really unhealthy, but this is anime not real life. Like who really cares of its not real or accurate. Don't watch it if you alread know you'd be disgusted with it.  If you have the mind set of just "why the he'll not" then it makes the anime way more fun, so you're not just sitting there picking apart every little detail.

Anime in 200 Words: Papa to Kiss in the Dark

Premise: A whiny teen boy is in love with his father and can’t get enough of their bonding time, even though he complains every time that daddy goes for his zipper. Meanwhile, all of his friends want into his pants as well, but it’s just not the same.

Plausibility: Ecchi is usually implausible, but I just don’t think that a whiny, sniveling little wuss would be so popular period, much less conveniently surrounded by gay men who want him. It’s hard to tolerate this guy; why would you want to sleep with him?!?

Characters: Everyone is underdeveloped and only given basic traits. It seems likely that the male characters who aren’t whiny boy or insatiable dad are only in the anime to show how irresistible whiny boy is or that he definitely has other options besides dad. I can’t remember anyone’s name, and that’s a bad sign.

Overall: There’s not much here besides fighting between rivals for whiny boy’s love, disturbing thoughts about incest, and whiny boy being emo. Why did I watch it? I was morbidly curious, and any number of cats can tell you what makes that dangerous.

I can't think of anything else for generic. Half the time I was "You don't say" or laughing my ass off at how shitty it is, how much of a bitch Mari is and how- no, that's about it. Don't get me wrong, it wasn't really intentionally funny and sometimes I laughed one second and had it die down to go serious face in the next, it was that I had to keep sane as I watched this wreck. But I did laugh instead of drool like a lobotomized monkey, so that's something. Worth a two at least.

Animation: That was a bitch pink. There's manly pink aprons out there but that bitch choose a bitch pink. But the bitch looks good, and so does everybody else since it's, you know, yaoi/shounen-ai. The guys have to look good.

Sound: Fuck, that bitch Mira has the perfect bitch voice. Fucking perfect. Don't take that lightly, that voice, just suits him so perfectly that I want to slap his bitch face everytime he speaks. That deserves a 10, but the music was only decent and the rest of the VO I could give less than a yellow shit about.

Characters: You think I'm fucking kidding at this point? Mara is the personification of a bitch. From his bitch voice to his bitch pink bitch apron, how everybody wants to blow his bitch balls to his bitch mannerisms and his bitch jealously- This guy represents bitches as a whole! Fucking 10 again just because of him.

Which means it's a shame that everybody else, except for his dad (But maybe him too) is as boring as fuck. They got a character trait or 3 and BAM! it's a day. Done. They got no meat on their bones and you can't bring yourself to give a fuck about them. They are just there to want to blow Mina- Mira's underaged balls.

Overall: The definition of a bitch can't save this shitfest. The scores are skewered to one or two defining factors apiece and are by no means a signal to watch this bitch fest. Only check it out if you're part of some assy club and on the agenda is shitty yaoi or you just like to watch shitty anime, but then I got a homoerotic clown to sell you.