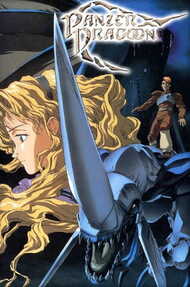 StoryOh lord... where to begin. Well, I suppose my task is easy, given the fact that there was essentially NO STORY. I could dictate the history of how this piece of bread ended up on my computer desk longer than I could describe the story of Panzer Dragoon. *Clutches head in pain.* No, seriously folks, this OVA was bad, just bad. The OVA itself is based off of the Sega games, I guess. I haven't played the games so I couldn't tell you which one it's based off of (if any), or if it's just a loose interpretation. In general, we have Kyle and his blind girlfriend Alita who are flying around on a dragon (along with a friend whose name I didn't catch, also on a dragon), shooting at little creatures. Presumably, this is some sort of sport. Anyways, a giant black dragon appears, kills friend, and snatches Alita, fusing her with himself somehow. Then, they fly off towards a tower, leaving Kyle with a nifty blue dragon that wants to help him out. And that, my friends, is the plot. Unfortunately, almost nothing is explained. I still have no idea where the blue dragon came from, why he wanted to help, what the deal with the black dragon was, etc etc. In fact, the end is completely anti-climactic and we still have no idea what happened. I really wonder what the point of this OVA was to begin with. I'd like to go bitch slap the creator of this dismal OVA, because it was such a waste of thirty minutes of my time. Well, I take that back -- I was actually so amused by how bad this was that it might sit up on the "5 worst (yet still funny) series I've ever seen". *Stabs eyes out repeatedly* AnimationNow, I really feel I'm being generous with the three, just because the character designs themselves (though COMPLETELY FLAT) were decent, with interesting colors used. For the most part, this animation was so terrible it was the most laughable feature of the OVA, easily. Imagine if you will, flat characters on top of extremely bad computer graphics. I can't even describe to you how bad it was, it's impossible. Even when the flat characters "flew" across the screen, the terrible CG swirly stuff was behind them. The dragons flew through columns that looked so ridiculously fake. It was like a cardboard cutout was being held in front of a moving picture, seriously! SO TERRIBLE. I'd almost recommend watching this just for the animation, so you can see how bad it is and laugh at it too. I'm talking MST3K bad. SoundThe audio was ridiculous, just like the rest of the OVA, sounding straight out of a NES game. That's right, we aren't even talking SNES level, just NES. Maybe they took the original Genesis game and jacked it from that, who knows. Tinny game-like music which I guess helped with the game feel, but sounded like utter crap the rest of the time. The voice acting was terrible (dubbed, I watched) and sometimes the dubbing didn't even line up with the characters' mouths. Kyle had a case of "over-pronunciation of T's", and whenever he'd say "Alita" it sounded ridiculous and scripted. The dialogue was so, so horrible and the voice acting didn't help. CharactersCharacters? What characters? We have Kyle, who likes the blind girl. We have the blind girl who is... blind. Then there's blue dragon who is good, black dragon who is bad, and that's it. Friend of Kyle survived for about 3 minutes on screen, so he doesn't count. Seriously, there is NO depth or information about the characters besides what I just mentioned. Zero development, zero personality, and zero brain cells. UGH!OverallPanzer Dragoon should only be watched if you have been recently pronounced brain dead (and your dying wish was to have Panzer Dragoon played on a TV in front of your vegetable body), or if ... hmm. Actually, there's no other reason. Well, I guess if you want a good laugh, that's another reason to watch it. Terrible animation, bad music, an utter lack of plot and character development, and all in all suckage make this one of the worst things I've ever seen.

Wth... So, Panzer Dragoon... This is was a weird one... It starts with something, and from then, it only went downhill, fast... The plot: So, 3 people are taking a stroll on their Dino's. Kyle, Alita(which name gets different pronounciations throughout the episode, 100 times or so... More on that later)and.. eh... Let's call him Dovahkiin, I forgot his name, and surprise surprise: a wild dragon appeared. It takes the blind Alita hostage and flies off. Kyle also finds this random-ass dragon and they fly off after Ahlytah. Then there is this random How To train your dragon moment where toothless 2.0 almost kills someone, gets emotionally sent away by Kyle and later returns to save his life, because a random commander wants to kill him. Anyway, they continue their journey and arrive at a tower. The dragon can talk. Someone activates the tower, dragon sacrifices himself, girl can see, they wash onto a beach, random dragon(if it's Toothless 2.0, idk) and Kyle says: 'the shape of destiny' as a reply to aliethas: 'what's that?' Let's say people in DTAB all said variations of: 'what'. If this made no sense to you, then good. Because the anime didn't either. Let's say the description made more sense than the anime. It of course didn't help I was busy with something else, so I missed some core parts.  animation: What happens when the 90s discover CG can also be used in anime, but only for space ships? The answer: Panzer Dragoon. Sound: Yes, yes, yes, yes. The music was very jam-worthy, but the voice acting was shit. Couldn't understand what the narrator/dragon/tower was saying. My volume wasn't at 100 percent, because I don't want to disturb people, and not make it more earrape than it already was(my laptop is from 2005, so it's really good at accentuating earrape). Like I said, the voice acting was really bad. You can see that it wasn't high budget right from the beginning. And it all went downhill from there. Characters:  They would use the names wayyyy to often in scentences, so it would go something like this: -hey Kyle! -Hi! -How are you doing Kyle? -Great! and you? -I'm feeling fantastic Kyle! and so on, and so on. It really didn't help that the dub actor for Kyle had severe issues with pronouncing the name Alita, he would do it wrong all.the.time. This name was said at least 1050 times and I haven't heard a correct pronounciation even once! I did get some sut in my eye when Dovahkiin died, like, 5 minutes in. DTAB was very sad, you noticed that because the mood dropped for the rest of the anime...(please don't take this seriously) I should have taken with that this was based on a game by SEGA, so not really anything to be expected there, but they didn't because the overall rating was a 1.5/5. So, this was all one big add to recruit you for DTAB(no it wasn't, but it would be awesome if you join, stranger who will never see this).  I'm out! See ya next sunday!