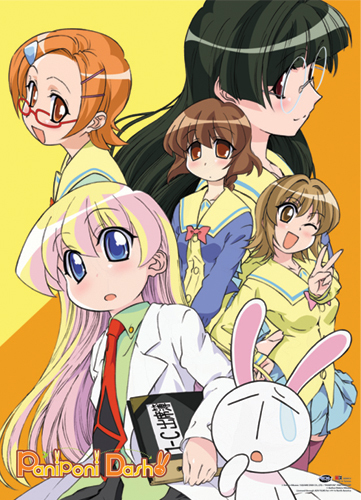 As an eternal optimist, I really wanted to like this show; random humour and the otaku nod to fans usually have me lapping up any serving of amusing antics. My kind nature was instead bitch-slapped into submission by one of the biggest heaps of god-awful unfunny trash I have seen in a long time. Even before the closing credits of the first episode rolled, I anticipated a humongous disappointment. It wasn’t until six episodes in, with no shining moments of redemption, that I realised quite how bad this show was going to be. Praying for the finale to finally arrive, I found it an uphill struggle via an impossible incline to get to the end of Paniponi Dash!. The episodic nature was hard work, and consistent repetition of mildly amusing jokes soon killed off any humour that may have lingered.

Parodies only work if you’ve seen the target subject matter, and much of the show’s shtick is based on bizarre Japanese shows and culture that only a native or an infatuated weeaboo will recognise. From the blatantly obvious that may raise a smile (Indiana Jones and Super Mario Brothers) to the little-known (poking fun at an insurance company called Aifu..?), nothing is sacred in the eyes of the writers. Some puns are understandable, and can be funny as a result, but the entertainment was killed for me as I struggled to keep up with the never ending nuggets of information about the current joke. I never thought I’d say this, but it was too fast and too much all at once....

One of the things that really irked me about Paniponi Dash! was a lack of situational background. The adorable Becky just arrives at the Peach Moon Academy, but there is no build-up or explanation to how she actually got the job. Seeing an eleven-year-old-girl being interviewed to be a high school teacher could have been very amusing, but the script writers chose to ignore this amongst other prime opportunities. This kind of omission just gives the whole show a flailing and deficient feel: like running the wrong way up an escalator, the legs are pumping furiously, but it essentially is going nowhere, fast.

Maybe it was because I didn’t “get” the obscure Japanese satire used, or maybe it’s because the entire show feels like recycled trash that I’ve seen before but in a successfully humorous show. Either way, I am glad to have finally expunged this woeful offering from my watching list.

Fulfilling their reputation for quality, SHAFT deliver a slightly above average offering that encompasses multiple visual styles. The cutesy girls are satisfactorily drawn, but the real outstanding animation comes from the varied appearance designed to complement the episode subjects. Switching the setting to a retro computer game, or paying tribute to Patlabor in one of the opening sketches, the artwork has some solid moments. Sadly, like many interesting gemstones, there are a multitude of imperfections; in what I can only describe as visual rape, there are scenes that need to be paused to read subtitles, footnotes, and a deluge of extra character information that flashes past at warp speed.

One of the only things I looked forward to in Paniponi Dash! was the surprisingly amazing kick-ass soundtrack. Seamlessly blending together numerous contrasting musical genres, from a swinging sixties style opening to a tuneful magical girl spoof, the whole audio medley works extremely well. A polished seiyuu cast also perform admirably, giving depth to a tender young Becky and an excitable charm to the hyperactive Himeko.

Along with the story, I find characters are extremely important in overall enjoyment of an anime. Consistent with a dreadful script, the imperfect characters feel as if they are designed to disappoint. Part of the problem stems from an unrelenting recurrence of stereotyped jokes for each girl, resulting in the initial humour dying on its ass before the show’s midpoint. Underage teacher Rebecca is either being a bolshie tearaway, or an annoyingly tearful brat and her flip-flop personality results in her being jarring rather than lovable.

The rest of the class consists of a handful of forgettable characters that will definitely appeal to some, but feel like the result of too much spoofing for others. The shy moe, an aggressive tsundere... originality means nothing in Paniponi Dash!, and I struggled to find anything likable about a translucent supporting cast. Of the wide-ranging personalities featured in the show, the relationship between the abused bunny Mesousa and a peculiar god-cat who lives in a vending machine was bizarrely the most believable. For something with so much potential, this felt like a complete waste of what could have been a priceless sister sorority.

I know there is a huge section of the anime community who love Paniponi Dash!, but it just didn’t excite or interest me. A host of two-dimensional characters and hit-and-miss puns made 26 episodes drag out over 4 weeks, and with no urge to pick it up each time, it quickly became a visual chore. Someone made an interesting comment that summed up the entire series for me: this is reverse plagiarism. You feel like you’ve seen much of the content before in more recent shows, such as Lucky Star or Sayonara Zetsubou Sensei, but the newer offerings do it with certain indulgent aplomb.

This is actually really odd piece of work. It revolves around a small girl that is a child prodigy that is being watched by aliens. The show feels a lot like School Rumble, Lucky Star, and Azumanga Daioh. It’s all over the place and hard to understand and yet it is fun and energetic. The story really doesn’t have much of a plot and even makes itself seem like a low budget TV show. The only thing that really keeps the show interesting is the characters. Many things don’t seem to actually blend in together.

Rebecca is a really odd girl, supposed to be smart but they never show that she is. She may seem smarter then most of the characters there but that isn’t much to be proud of. She’s a loudmouth, smart ass little girl that really cares more about herself then most of her students feelings. She is pretty much like a whiny little brat though she does she have a little bit of good traits and yet she might be the only lovable character in the show. I’m really not all that sure about the other characters because they seem to all blend into each other. I don’t even get how the cat is considered God too. It just seems really strange.

My favorite character is Rebecca’s rabbit actually. It’s a really strange mutant bunny that walks around is almost always depressed. To me, that’s the best character in this moe induced world.

The opening reminds me of Sayonara Zetsubou Sensei and some of the old spy shows in how the whole thing seems to be old colorations and somewhat grainy sometimes. The artwork in the actual show is down right crazy sometimes. It’s very bright and sometimes even too bright. It’s somewhat hard to watch because the style jumps from rather good to somewhat decent quality especially when the characters squash and stretch.

The music is alright, mostly the sappy slice of life stuff we normally get and has a feeling of Azumanga almost while still being its own. I’m not sure why every character seems to have a ‘hair-lo’ as some people call it, like its stage lighting. Another thing that feels strange is times when the whole show becomes a video game or stage in itself, and the characters talk about it, breaking the 4th wall to bring the watcher in more.

I agree with the editors review. this is far from good anime. but I still found it fun to watch. the story is none exsistant and random. the whole anime is random and speradic. but what I liked about it was its mocking way of playing on all the cliches of anime and manga. the magical girl who can't actually be scene using her powers or she woudl lsoe them. or how the charactors yes fit stariotypes of anime but flawed in the way of someone playing at the roles rather then actually fiting them. I normaly don't like anime like this but the way this one mocks the usual stuff made it endearing to me despite being so poor when compared to great anime. but the nonsequidors in some way make sense as apposed to jokes for the sake of jokes because the chractors live in the world and let the world comment on the obserdaty. watch how the forth wall is smashed broken and turned on its head just for fun.

and why does no one care about the talking rabbit thing. how is that normal in a world that tries to play as if thigns are normal when they are clearly obserd.

you will quickly know if you like it or not and go with that first opinion it should be spot on.

That was one bizarre, twisted and funny ride :P

I have a strong "Lucky Star" feeling after watching this. Not because the humor or theme of the anime is the same (because it's not), but because when I first watched Lucky Star, I didn't recognize over half of the references. I still enjoyed it, but not half as much as when I recently rewatched it, and actually got most of the parodies.

Paniponi Dash! has most parodies based on some of the older anime, from which I've seen very little. I'll probably rewatch this once I've seen some more classics.

Parody section aside, Paniponi has large crew of funny characters. From the serious, usually thoughtful, money-obsessed Rei, to the over-energetic, crab-loving, idiotic Himeko, to the rabbit mascot without any confidence. The large cast with different personalities is exactly what makes it so good. It was easy to get through the 26 episodes and I never had to force myself to watch this, even with my extremely limited knowledge on classic anime.

I'd recommend this to anyone who enjoys comedy / parody shows, all the more if you do have some knowledge on classic anime.

I'm giving this a score of 7 because I "didn't get" the references.

The show is really cute and... no, a bit weird. First, why is there "shounen" in this show's genre? No any other website shows it. Second, the start story is really unclear and weird! How REALLY can an 11 year old be a high school teacher???? Uh.. I just watched few eps but really it's weird... If you love comedy then this is the best anime.