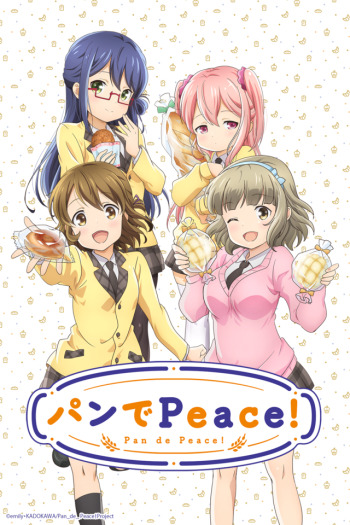 Pan de Peace! Is based off a 4 panel manga written by Emily, who usually writes adult comics. Which is very weird since there isn’t anything adult in this series at all. I can see how this would make a really funny 4 panel manga since the whole thing is based off bread, but it just doesn’t work out as a 3 minute episode. This is the first and most likely last time I am going to say this, but I think it would have been a lot better if each episode was only 1 minute acting out the comic.

STORY: Just a slice of life following a group of girls in school. They all really love bread for some reason. The title even translates to peach through bread. Just some things happen and everyone eats bread, sadly though its really slow.

ANIMATION: It’s ok. Almost felt to me that Asahi Production who produced it picked it up to give their new employees are chance to draw. Also being a small studio they aren’t able to make the most beautiful scenes. Everything does look nice though, but backgrounds and even the girls themselves are all drawn pretty plainly.

SOUND: The intro is annoying, but other people don’t mind it. Once in a while there will be some “upbeat” music with a flute or something, but that just sounds out of place.

CHARACTERS: No development, but what can you expect with a 4 panel manga. No one has an interesting personality and even the characters look exactly like characters I have seen in different anime

OVERALL: I give it a 5 (bottom 30%). It’s only 40 minutes so I wouldn’t blame you if you watched it, but there are better shorts such as Ojisan and Marshmallow that I would watch first.