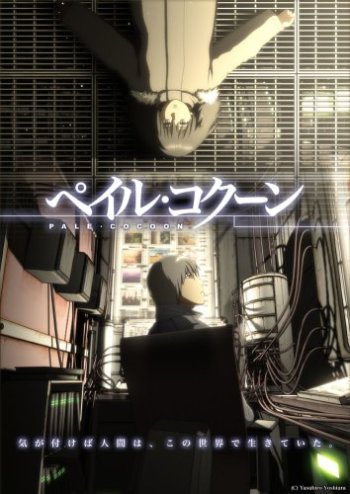 Most people will find it hard not to compare this 20 minute OVA to Voices of a Distant Star; indeed, in many ways Pale Cocoon is the spiritual successor to the landmark 2002 anime. Each of them has absolutely stunning CGI and an overwhelming sense of nostalgia. Even more significantly, both use science fiction motifs to tell extremely melancholic tales that leave me dazed and breathless every time I watch them.

Up to now, I had always believed that Voices was a one time good deal – a unique and beautiful miracle that could never be replicated. No other anime could fit such a touching story into such a short running time; no other anime could break hearts with characters it had only just introduced. After seeing Pale Cocoon, however, I’m not so sure. While the OVA lacks Hoshi no Koe’s sheer unbridled emotional impact, Pale Cocoon is a much more complex and thought-provoking work.

Many will take in the post apocalyptic world, the futuristic setting and the old newspaper clippings of human folly and assume that the OVA is another entry in a long line of cautionary environmentalist tales. This is not the case; rather, the movie presents us with a fascinating question practically untouched by any anime that I have seen.

Unfortunately, succinctly stating this question is difficult to do, as the very uniqueness of the OVA’s message eludes simple generalization. Allow me to say, however, that the OVA looks with a sad eye on humanity’s imperfection. It considers the shortsightedness and greed that so very often override our rationality, and then reflects upon our unwillingness to examine and understand our own ugliest mistakes. Then, at the end, the anime suggests that this depressing and “useless” knowledge of our own flawed heritage may be the most important knowledge of all. What’s most impressive is that the anime is able to do all of this and more in the time that most anime would take to come up with one coherent thought (i.e friends are precious, durr).

Because of the show’s brevity, it doesnt have the time to actually tell us how awful the world has become. This is where the animation comes in. From the understated character designs to their dismal metallic surroundings, the visuals work brilliantly at conveying just how far humanity has fallen into their “pale cocoon.” A fair bit of CGI is employed to help reinforce the artificial setting, but it never gets in the way and is unquestionably excellent whenever it is used.

The visuals are in turn complemented by the sound, which is used well in its own minimalist way. For the most part, the sound is dominated by computer noise intermixed with quiet, introspective dialogue. This doesn’t make for a particularly flashy OST, but it further reinforces the lonely mood that the director is going for. The generally quiet OST also leads well into the show’s climax, when a top-notch J-pop song blindsides you out of nowhere.

…but what about the characters, you ask? Well, what about them? If you ask various people what they thought of the characters in Hoshi no Koe, you’re bound to get a myriad of different answers. Surely, there’s none of the traditional development that you’ll find in lengthier titles, but a surprisingly large portion identify with Voices’s two characters anyway. The same will probably hold true for Pale Cocoon; the characters are effective not for what you know about them, but for the very ideas they represent. When the protagonist of Pale Cocoon secretly copies an old picture of Earth into a special folder on his personal computer, we all copy it with him.

Overall, this is a class act in every respect, and I’d recommend it to just about every fan of science fiction. The amazing power of Hoshi no Koe and now this proves, I suppose, the validity of isolated anime short films. Consider the turbulent, roiling waves of the ocean to a single, isolated tear drop; in many cases, perfection is only found in the small things.

Pale Cocoon is a melancholic and interesting piece that is more work of art than anything else. At the start, you may think it is yet another one of those short and preachy "save the environment" type shows. The dark themes, in animation, sound, writing, and characters pervade everything. And then the ending twists everything into a different perspective and elevates this short work into being truly memorable and with a powerful impact.

The animation is so dark and depressing, to fit with characters that are on the border of losing the will to live. The sound is dominated by the voices and ambient noise, with one song to steal the show at the end. And the story, while simplistic, is thoughtfully executed and manages to have a large impact. For only twenty three minutes, we get hints of romance, family, happiness amidst a crumbling world, despair, and finally hope. This is all done by everything clicking together in order to give us one vision, one slice of a world in all its ugliness and beauty.

Science fiction is hard to execute, and is doubly demanding when in short story format. Science fiction is about creating a world and breathing life into it, and in twenty three minutes, Pale Cocoon manages a smashing success at that. Breaking it down to the elements that make it work is silly. What really matters is that in a short period of time, there is immense impact, and a ride that manages to convey both darkness and wonder, through the eyes of people who want to dream in a reality where dreams have no chance of fruition.

I cannot help but highly recommend Pale Cocoon to anyone who even remotely likes science fiction. At twenty three minutes, it will be a waste of no one's time. But if, like me, you are looking for a short work of art that can really move you, this very well may be something you will want to remember.

“In the sky, there is no distinction of east and west; people create distinctions out of their own minds and then believe them to be true.”

The audience opens their eyes to a set of wrought iron stairs, coiling about a brilliant pillar of golden light. It illuminates the dreary recesses of this world, the rusting iron, the sluggish gait of the excavators leaving their cubicles. This is the fate of mankind, stuffed into the interiors of the planet because the surface has rotted away from overpopulation. At least it’s not global warming that dooms us, Pale Cacoon predicts it’s a lack of protection.

My fascination was pulled into the dank crypt of Ura and Riko, the two leads, as Pale Cocoon toys with many concepts. Environmentalism and population pollution are obvious themes but only scratch the surface. More interestingly, the narrative asks whether the past is on any use when there is no escape from your present? The theme is expanded as the characters are asked to question their reality and prove to themselves the sky of once-upon-a-time is truly gone. It’s ambitious, aiming for annals of philosophical abstraction even with its twenty-three minute scope. It’s grand but it has a humble foundation; Most of the story is driven by the interaction of Ura and Riko and their diverging opinions on the archaeology of history. Their friendship is both unnatural and snug, a love-hate push and pull that’s intriguing and advances the plot. It’s the small nuances of this relationship that make Pale Cocoon a moving experience, and the revelations of the final minutes that make it phenomenal.

Dilapidated never looked so pretty. Seamlessly integrated CGI and artwork come together to form a visual masterpiece. Lines are clear and crisp, serving as frames for the cell shaded images. These set pieces are filled in with an appropriately post-apocalyptic palette. Soiled browns and sooty grays swathed in the pale light of computer screens. Swashes of neon green burn dimly in the underground bunkers as the workers return with their zombie-like strut. It’s a mechanical world that inspires both sadness from its poor condition and awe from the technical beauty the artist took effort in creating.

Both grand and haunting, the soundtrack for Pale Cocoon is exceptional. It draws from different genres, a classical back bone of pianos and violins, layered by electronic horns. It even delves into Pop, a guest appearance by Little Moa, who solos a powerful ballad. The voice acting is just as impressive; Ura’s delivery devoid of most emotion while Kiko’s inflections delivers insight into her sorrow. Like the rest of the film the sound is handled spectacularly.

From such a short film you can’t expect much development, but the two leads Ura and Kiko have surprising depth. Ura is an excavator, swimming through seas of binary code day by day to figure out the world that was. He’s passionate, teetering on the edge of obsession when it comes to the past, tirelessly trudging through the 0s and 1s, saving what he finds interesting. But he is curiously detached from Riko, the analyzer, a friend of his. Riko has stopped showing up to work favoring the bleak company of emptied stairs. She sprawls herself across the grate looking up into the dark retreat, pondering. The anagnorisis of both characters not only speaks volumes about each of them but the world they are living in. In the brief time we see their conceptions of the world change, Ura finally maturing and Kiko gaining a bit of optimism.

Pale Cocoon brings together excellent storytelling and production to create a miniature gem. Its easy to get lost and not realize that the program is over. It deserves a watch by any fan that believes anime should be more than entertainment but art. Pale Cocoon does what most animation doesn’t: provoke my imagination. Just as Riko gazed up into shadows I was left contemplating my dimmed screen.

The main story seems to be a classic; humanity's irresponsible actions (enviromentally-wise in this case) bring an end to the world as we know it. In the future, people are trying to recover archives of the past world, although this way they are forced to come face to face with humanity's mistakes and fate. An attempt to be atmospheric almost succeeds, yet there is too little information given and at times it seems that the artists didn't even look at what they were drawing. It is dissapointing that even though the idea is great, the anime itself is a waste of time.

It's a post appocallyptic future where humans live underground.  The main character excavates digital data on what Earth was like before.  However, he is the only one who is still interested in excavating the data since everyone else (including his girlfriend) has given up hope and wishes they never excavated the data in the first place.  The story can be a bit slow at times, but I personally think the slowness actually helps with the overall atmosphere of the show.  The twist ending also helps.  I do wish there was more to it, though.  That said, it is a beautiful story.

The animation is pretty good and the dark tones really help with the overall atmosphere of the show.

The background music fits the atmosphere of the show for the most part.  The song towards the end is also quite beautiful.

Considering the length of this OVA, the two main characters do get some semi-decent development for amount of time given.  They also help set the tone of this OVA.