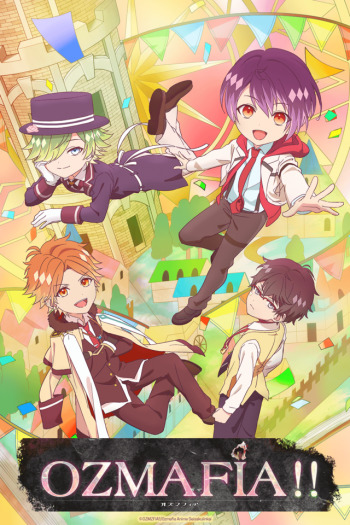 I really enjoyed this! It didn't have too much of a plot, but the characters and art were amazing! It was very cool of them to give all characters a cute look, which made me enjoy meeting new characters. As I said, it was more just random events instead of a plot with a lot of character development, but that didn't mean that the show was terrible. The bits and pieces which did make up the story were adorable and fit a four-minute episode style. If the episodes were longer, it would be a problem. But since it would be difficult in the first place to give such a short anime a plot, I believe it worked perfectly.

I adored the Ozmafia!! visual novel and so it pains me to see the anime with such a low rating, so here I am writing my first review! Please read and don't just judge off of my scores!

Note: As someone who has played the game I would recommend tha you have done so before you watch this. Otherwise basically nothing will make sense, which is why the average rating is probably so low.

Unfortunately I can only give the story 5/10 max. This is because there basically is no story, apart from the basic theme of Scarlet starting a new, if bizarre, school. However, I did not watch this for the story, and I would say the anime is more a supplement to the game than an anime in it's own right. When I first heard they were making an anime of the game I wasn't happy they had changed it to a school setting, however considering the episode lengths I'm glad they did as keeping the mafia setting wouldn't have done the game justice.

With only 4 minutes an episode, the animation is nothing special. In fact, other various people in the school are just drawn as outlines. The chibi style I was unsure about at first however it works well with the short episodes and school setting. After the small ending scene, there is another scene where most anime would have something like an 'on the next episode bit'. But, this anime has a scene with one of the characters, however they aren't draw in chibi school style, they're animated as if they had used the adult, game version of them. I thought this was a really nice touch, it was nice to be able to see the proper character from the game animated, if only for 30 seconds.

I was so impressed with the sound. They use all of the same songs and background music from the visual novel, which I loved. The majority of the voice actors sounded very similar to the game, they may be the same people I'm not sure, but this was also a really nice touch.

The characters are my absolute favourite part of this anime. If you're still reading then remember when I said earlier about the anime being a supplement for the game? This is because the anime allows you to see all the quirks of the characters which are visible in the game, however seeing it animated is so much better. You also get to see how various characters interact outside of the plot of the game, including characters who rarely interact in the game at all.

Basically no story, so if you haven't played the game you probably won't understand most of it. Animation is cute and good enough for only 4 minutes an episode. Sound is wonderful. Characters and how they interact is hilarious, but again probably a lot more so if you've played the game.

Had to drop at episode 2 (halfway through, not so bad Eve!!). Honestly, it was just pretty boring, which is weird because it's only 4 mins an episode. Idk, it's not really anything like the game, even if the charaters are the same.