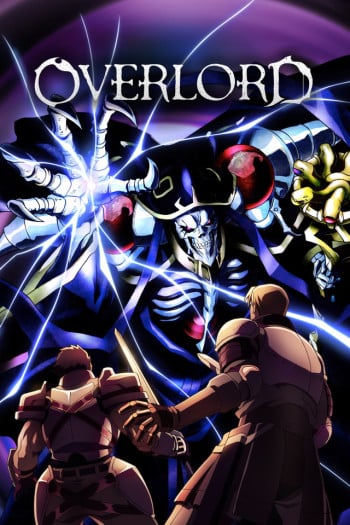 So far, Overlord looks really promising. It gave me the hype that SAO's first episode did, so I'm hoping it doesn't faceplant in the next few episodes like SAO did.

Re:Monster has a very similar premise in that it takes place in a videogame, and the main character finds himself as a sort of leader for a pack of goons. Both really great titles.

If you liked Overlord or Gate: Jieitai Kanochi nite, Kaku Tatakaeri you'd also like the other one because both shows tell the story of a male protagonist from our world going to a fantasy universe with a twist that they're backed up by a military force much stronger than their potential rivals and both take part in the conquest of the fantasy worlds they are in.

Overlord and Gate have also strong focus on politics and diplomacy, dealing with both opponents and allies. The thing I find differing both shows is that Gate has much cuter girls, but they're also there in Overlord too.

"THE NEW GATE", an online game that trapped its players and turned into a death game, was now releasing the thousands of players that had been dragged into it, thanks to the efforts of Shin, one of the most powerful players. But after having defeated the last boss and freed everyone, he was swallowed up by a strange light and found himself inside the game world 500 years in the future and unable to leave.

An SAO side story written by Kawahara Reki that was distributed as a present to visitors of Sword Art Online The Movie -Ordinal Scale- in Japan in the third week of the official cinema release between March 4 and March 10, 2017. The SS features a background story for Yuna and Eiji, two of the original characters in the movie.

THE NEW GATE―an online game transformed into a life-and-death struggle for its players. Thanks to the valiant efforts of Shin, the most powerful of them all, an end to the game and freedom for everyone seemed within reach. But just moments after Shin defeats the game’s final boss, he finds himself bathed in an unknown light and transported some 500 years into the future of the in-game world. Thrown from a simple game gone wrong into a strange new land, one young swordsman of unrivalled strength is about to embark on a legendary journey!