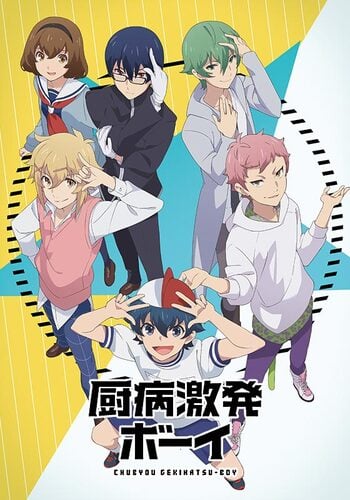 I loved this anime it really is a hidden gem!!

highly recomand I just loved it so much I completed it in 1 day!

This is show is so funny!!! I really did not expect to like this as much as I did! If your looking for plot, this show isn't for you but if ur looking for random bullshit and running jokes then this is definitely for you! Watch it right now °∆°

I gave it a really high score just because of how happy I am after every episode. The jokes, althought mostly the same, never got old for me :3

The plot is simple but it's really not about that in the long run.

What mattered to me was how much I cared about the hero club, the characters and how friggin funny everything was even during times I was suppose to be sad XD

There are obviously things to not like though. Mainly the student council - 3 - Their not the most annoying or anything like that and they ARE necessary but my God I hated them XD. They just seemed really unrealistic even in a show like this! There is no way in hell a school would care about what there students do outside of school! As long as their not wearing the uniforms there should be no issue but that would ruin the tension o3o

Also episode 9 felt like much more of an ending than episode 11. They spend so long on the festival that it felt like a happy little end but they just haddd to rush in some random penguin bullshit but the show is kind of like that so what are you gonna do? :P

But anyway this is a really good show but don't go in expecting perfection :>

Episodic so you won't find an intriguing plot.

Honestly at first I almost dropped this but then ep 2 came and I just can't stop watching.

The boys here are hilarious with the combo of the only sane person the newest member PINK. Their personalities are mouthful to explain so just go watch their stupidity for yourself.

You WILL cringe/ second hand embarassment on this anime, that's kinda the point.

This anime is honestly one of my all-time favorites. It's really funny and has great characters and a great plot. I found this thanks to rerulili. I will always love this show.

Just saying: FOR THOSE OF YOU WHO DROPPED AFTER THE FIRST EPISODE BETTER COME BACK. I KNOW THE FIRST ONE IS NOT THE BEST BUT IT'S BETTER IF YOU MOVE ONTO THE SECOND EPISODE!