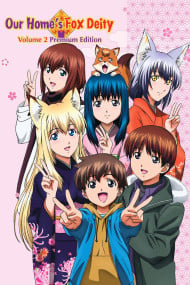 Our Fox Deity, Takes up Residence

Our Fox Deity, Goes to School

Our Fox Deity, Breaks a Taboo

Our Fox Deity, Overindulges in Food

Our Fox Deity, Goes on a Search

Our Fox Deity, Does a Grand Fight

Our Fox Deity, Goes to Work

Our Fox Deity, Takes a Trip

The fox god is cute, fun, and funny.  She is a powerful entity but is also naive and like a child when she is exploring the community and all the new things she did not get to notice while she was confined.  Yet despite her bitter past and sub par previous treatment, she is bright, cheery, and optimistic.  The sentinal though feels a bit shallow as if her character was never fully completed.  She is almost like a savant.  She is really good at one thing, and a complete failure at everything else.  But she is so bad and incompetent that it takes her the entire series just to learn a few new things most people experience as common sense.  Common sense wise, she has even less than the fox, aka Kuu or Kugen.  She is a typical dumb bimbo type character but with magical power.  If she were just a hair more intelligent, capable of learning from her past and mistakes just a hair better, and actually had some measure of common sense, she would be a charming if not dimwitted character, but as she is, she  is more of a nuisence than a boon to anyone around her.   Another down side is Sakura.  She is a great character, cute, charming, sympathetic, endearing, and arguably as or more appealing than Kuu.  The problem is, the bonehead antics of the household head and elder brother, Takagami.  This type of cutsey chasing a love interest play is interesting for a while but as usual, anime too often drags things it shouldn't unnecessarily long.  This is one such example.  I may not be super senstive to a person's interest in me anymore than Takagami, but even I when watching it realize she is hinting at something and would at least inquire about it.  Takagami is so dim about that, that he would not realize it if she paraded naked in front of him with a giant sign professing her love.  Every episode Sakura appears in, makes me want her to win and finally get this dunderhead's attention, but the show always lets me down.  Hey the love chase game is fun but it shouldn't drag on forever and worse, never have that resolved reward at the end.  It is because they tease you like a carriage driver waving a carrot before a mule that a viewer like me gets frustrated.   Other than that, Takagami is a fine and intelligent character, he just has no social sense or woman radar whatsoever.  But he has tons of good qualities that make him a good character.  I would like to have seen him wake up though.  His younger brother, supposedly has some sort of power too, but should it not be hinted at or seen at some point?  Another carrot dangled before the eyes that never rewards you.  Aside from a few flaws like this, this is a great overall anime. I suppose it needs another season or two however to feel complete as it has a few major unanswered or unresolved issues forshadowed through out the series and thats also a bit of a problem.  Still the strength of the charming characters and their relations is its strongest appeal.  The stories are mostly lighthearted and feel like filler but now and then there are hints of a overall long term story.  Ths is also part of the reason the series seems incomplete with just the 24 episodes available. There is never that really big feeling dramatic ending story arc many of us have come to expect from good stories especially anime series which commonly has an overall story to the series as a whole.   One other slight annoyance is her sibling fox who we only see getting a full story near the end and as with the other dangled carrots it is a lead into an unfinished route.  Sometimes it felt as though the series lacked a sense of focus and other times as if it had too many side stories interfering with the overall story.  Yet it still holds a strong effect given the good characters despite some of the flaws with the anime.  It has a charm all its own that you only get to experience by watching it.   If only it were improved in a few small areas and the series had another season with a more complete set of story arcs and so it provided some closure to all the forshadowing it left hanging and the unanswered questions it gave the impression would be answered but did not.

Story: Not much is going on in this anime, the summary has almost all you need to know about the plot. This show is more about different small stories centered around a character or group (Mubyou, Shiro...). I was pleasently surprised to see myself caring about Shiro and touched by the "ending" (not of the actual anime but of the the plot centered around her). Much of this show is from Shinto yet, as I know nothing of this religion, I couldn't really get the references. I thought of it more as a tool to cement everything and everyone together and create an "environment" as a whole; it never felt like something important to drive the plot forward. As for the comedy part, it was nothing to be remembered. I hardly laughed at any moment of the anime. Kou destroying the dishes was probably meant as a running gag but it never felt like a joke to begin with. It doesn't mean you won't laugh, maybe it was just not my kind of humour, to one his own of course but I believe most people won't laugh out loud often with Wagaya no Oinari-sama.   Animation: Nothing particular to say about it, it's decent. I increased my rating a bit as I especially liked the character design for non-human ones. Sound: Again something this anime won't be praised about, it's correct but nothing really caught my attention except Mubyou and Kuugen's voice acting, I enjoyed it, especially when they're begging. Rie Kugimiya is better doing Kagura but she did a good job (but too short unfortunately) with Shiro anyway. The two opening and endings were nice but as for the rest of the soundtrack, it doesn't really bring much to the actual scenes in the anime.   Characters: Toru and Noboru are boring as main characters, I thought they were very bland. As for the animation, it's again to the non-human characters you have to turn to to find the best (although Kou isn't bad actually, her clumsiness made her pretty cute at times). Kuugen was really likable with hermischievious personality, Mubyou also had something to make her enjoyable although it's harder to pinpoint what and Shiro was definitively one of the cutest character I know while carrying the best fights in the series.   Overall: While I cannot say it's the best anime I've ever watched, it was still enjoyable overall. Unlike those series you just can't wait to be over with, Wagaya no Oinari-sama made me want to come back for more. If a second season were to be aired I would surely watch it, not for its humour but for what is worth as a whole. I would like to see Kuugen, mubyou and Kou again but most of all, I'd love to see Shiro again. 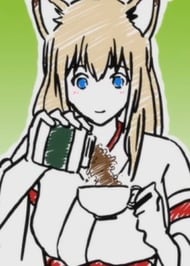 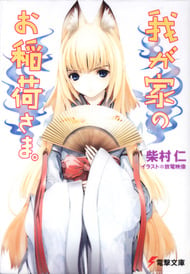 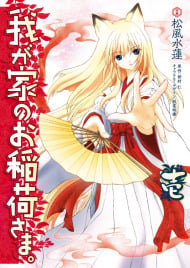