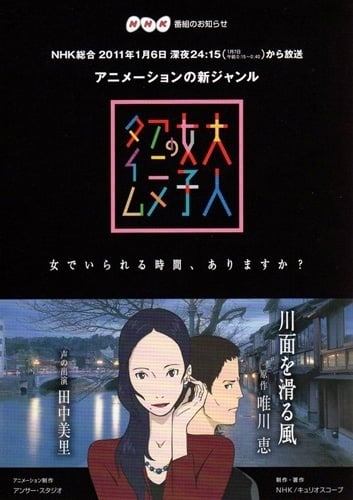 If you're looking for anime similar to Otona Joshi no Anime Time: Kawamo o Suberu Kaze, you might like these titles.

I liked Otona Joshi far more than Only Yesterday, but both will easily appeal to the same audiences. The plot is very similar - a woman visits her childhood town and remembers her past. Both are aimed at a more adult audience and are bittersweet, and the teenaged years animation of Otona definitely paid homage to Ghibli. Try one out if you liked the other.

I definitely think these two anime are made with a similar audience in mind. They have the same nostalgic, bittersweet atmosphere and both are mainly about an older woman thinking back to experiences in her childhood.

These two pretty titles display an understated romance that not only captures your attention but also comes across as more geniune compared to other depictions in anime. The bittersweet feeling you are left with after enjoying one could also be recaptured in watching the other.

Otona Joshi and 5cm/s are two anime which, in my opinion, function primarily as reflections on the possibilities of love in the treasured past of adults. The same sorts of feelings permeate the atmosphere in both shows: melancholy, loneliness, nostalgia for the innocence of childhood, and observation that the responsibility of adulthood takes precendence over the past.

Now although I find Otona Joshi to be WAY better than Ocean Waves, I do think they make a good recommendation for each other. They both share a sense of melancholy and bittersweet storytelling that would appeal to the same audiences.

If you liked the untraditional romance of one of these josei shows, check out the other. Both are understated and sometimes a bit melancholy, but sweet and feature characters far removed from the stereotypes and stock characters of other series.

Josee, the Tiger and the Fish

With dreams of diving abroad, Tsuneo gets a job assisting Josee, an artist whose imagination takes her far beyond her wheelchair. But when the tide turns against them, they push each other to places they never thought possible, and inspire a love fit for a storybook.