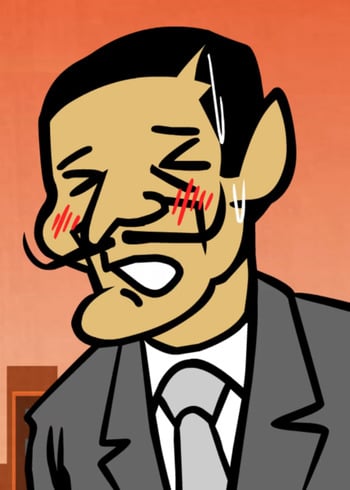 23-year-old OL Tsukahara Sawako has a sober social life. She was assigned to the General Administration Section 2 (Shomu ni, or GA-2) which is considered the dump of the company under the senior OL Chinatsu Tsuboi. The story follows their boring yet quirky work lives.

Pochiyama-san works at a local pharmacy. She is a loner and seldom speaks; instead she writes what she wants to say.

Kishi Mieko, a woman office worker, tries to succeed in a competitive, unforgiving and lewd work place in Japan. She will use all her 'assets' to succeed in her projects!

Follows 26-year-old office worker, Momose. He recently changed jobs after his previous boss harassed him. He's worried his new boss will also use power harassment to make his life miserable. Momose is trying to hide his anxious stomach when he first meets his new boss Shirasaki, however he's surprised to find his new boss is such a natural airhead that he eliminates all of Momose's anxiety.

An ordinary college student's interactions at work with his high-school-aged senpai.

Kasumi, a high school graduate who entered a black company 3 years ago was in the midst of a late night overtime for the 30th day in a row when she wished that she could have "a single day off" to the shooting star she was watching on the roof. Suddenly, she was swallowed by a mysterious light...... The next thing she knew, she was standing, waiting to be introduced to her new colleagues at "White Products"! Will Kasumi be able to get used to the culture of the light side of business after thinking that the dark side's dealings are "normal"?