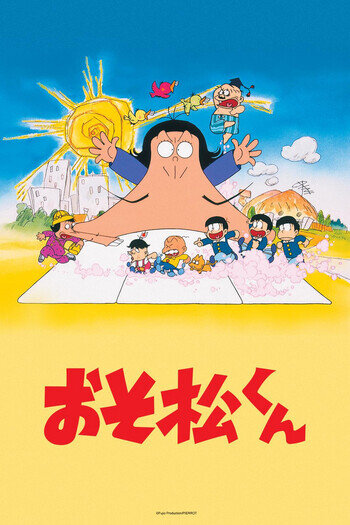 Both shows have the same style, the same character-archetypes and the same jokes. Although Osomatsu-kun was executed better, you will like both if that is your kind of humor.

The cast of Fullmetal Alchemist aren’t always as serious as they appear to be; even they need to have fun from time to time. Whether Hawkeye manages to find a novel method for defeating the “Invincible Elric Brothers”, or Bradley decides to further humiliate his defeated foes, everyone has their own quirky ways of winding down. However, not all things change as no matter where he is, Hughes will always fawn over his beloved family and foist photos upon anyone nearby – even if it means holding up the show!

She is Hanabatake Yoshiko, and she's an idiot through and through. She loves bananas, and she loves her childhood friend Akkun.

Dr. Slump creates a little android girl, Arale, who is very stong, happy, and totally common senseless. They live in Penguin Village where the strangest things happen (e.g., the dawn is announced by a little pig wearing a basquee).