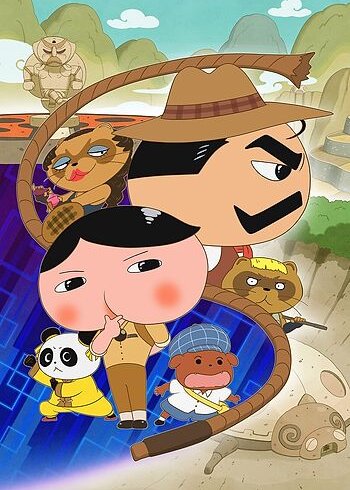 If you're looking for manga similar to Oshiri Tantei Movie 2: Tentou Mushi Iseki no Nazo, you might like these titles.

Kokindaichi Kotaro just recently got accepted to work at the Hanasaki Detective Agency and can’t wait to get real work experience as a Private Investigator. Headed by a young beautiful woman named Hanasaki, her crew of detectives is nothing you would expect. They spend a majority of their times doing nothing and fooling around with no real case to work on. Kotaro tries to learn as much as he can, but the unprofessional work atmosphere makes it really hard. Just when he's about to give up, he sees what amazing potential each member of the agency has.

Tsumaki is a private investigator of the “Aaah Detective Agency” that is obviously listed on the first line of the phone book. He has a great love toward investigation, and aims to solve new cases with his keen and original insight, yet always tends to fail miserably. No wonder he’s pinched to pay his rent… With the support of his colleagues, powerful action, and elaborated costumes, he tries to solve crimes in his original ways!

A pair of young aspiring mystery writers have weird incidents happen around them that need solving. Luckily for them, the Masked Detective inexplicably always shows up to help.

The detectives are supposed to be the good guys, right...? That's certainly what Arata Toiro used to think, but after having his first brush with a real-life detective, suddenly he's not so sure. I mean, there's no question that even though he's still just a teenager, Yoh Kuroba is a gifted sleuth. It's just that he seems to have a peculiar predilection for making his adversaries writhe more than just catching them... That's really not normal, is it? Either way, now that he's found himself bullied into a position of playing Watson to Kuroba's Holmes, it seems that Toiro will have plenty of opportunities to find out!

Meet the extended staff of JDC, quite possibly the oddest detective agency ever formed, which includes a strange boy with a circle tattooed around one eye, a man missing his mouth, another man in a ball-gag, a woman in a cartoon mask, a socialite - and yet they all come together to solve murders that ordinary police cannot seem to grasp, and there's a reason for that...