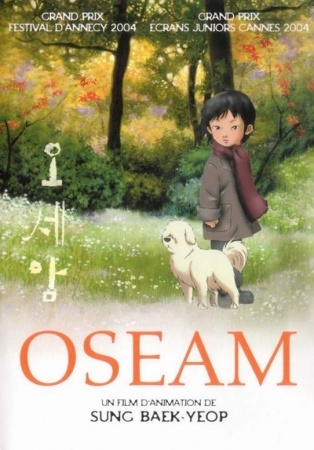 While I have no particular like or dislike of eastern philosophy, I find myself put off by the attempts of many anime to brazenly thrust it toward the viewer in an in-your-face fashion. These incidences always end with a general collapse of the anime as a whole, as they disrupt the natural flow of the story and discard their characters for pseudo-metaphysical set props. Such mishaps too often verge on catastrophic, and have thrown countless should-be-great titles onto the garbage heap of mediocrity.

And yet, despite the numerous renditions of philosophical failure surrounding it, Oseam reminds us all that such stories can not only be handled appropriately but also remarkably well. Indeed, the movie tells its tale almost exclusively through refinement and nuance, and falls nothing short of beautiful. By means of lavish imagery and near-poetic visual illustration, it captures the subtle wonders of nature - from the red hue of autumn leaves to the towering splendor of snow-capped peaks - and blends them seamlessly into the human experience. The philosophy thus drifts away into the background, relying much more on subconscious identification than brazen preaching.

Still, stunning and refined as the presentation may be, the movie's Buddhist inspiration steps beyond its monastical pretenses. Though both joyous and solemn on numerous occasion, the shifts between the two sensations are almost non-existent, and provide for a very static emotional presentation. While to some this may seem a bland premise, it provides the film with a unique, harmonious quality which trumps all else, and guides the story along with a tact that puts most other linear tales to shame. Despite lacking any one central focus or direction, all its thematics are handled with a soft, graceful hand, and brilliantly string together the many elegances that make life the unique experience that it is - a true bittersweet melancholy if I have ever one.

While Oseam may not possess a flawless visual score, the art direction is without a doubt top notch; by means of the environments alone, I found myself drawn into the happenings of the character's lives. Whether it be the skipping of a stone across a lake or the still shot of a statue's gaze, the movie blends motion and stills together in a symbiotic fashion, and not once does the abundant usage of the latter intrude on the flow of the story. All such uses are distinct, deliberate, and justified, and capture the emotional essence of a scene where movement otherwise would not. The animation matches the pacing of the story with near flawless direction, and ultimately there exists little with which to find fault.

My only "substantive" complaint would have to be Oseam's sparse and limited use of music, and even then it is a rather specious observation. The movie makes every point to capture the natural flow of daily events, and as life has no accompanying musical score of its own, much of this audible downplay is entirely intentional. In trading away its soundtrack, however, the movie highlights ordinary events such as the flutter of a thrush's wings to fill the audible void. Combined with a choreographic placement on-par with the aesthetics, the sound effects thus become the world itself, and parallel a splendid cast of Korean voice actors with certain dignity.

For a mere eighty minute film, Oseam's characters are marvelous. Though little special can be said of their one-dimensional contexts, not a single aspect about the cast can be labeled anything shy of effective. Despite having distinct personalities and pasts, the characters all seem to fit into a subtle spiritual niche. Much in the same mold as Haibane Renmei, the metaphor and characters become one in the same, and deliver a multi-layered telling of a simple, heartfelt tale. While each character has his or her human side, it is mirrored with a strong sense of spiritual duality, and generates a substantial portion of the film's gravitational emotional pull.

While I would not rank Oseam among my all-time favorites, it is nevertheless an excellent production. Simplicity and subtlety are without a doubt its greatest charms, and prove that philosophical disasters can be avoided if just given proper tact. To all fans of Studio Ghibli I give my utmost of recommendations, and to all others I invite with open arms - this title is not to be missed.