Origin: Spirits of the Past - Reviews 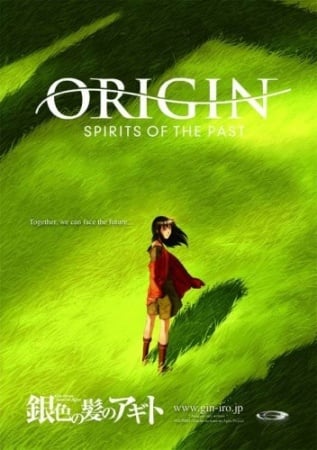 Wow. Could a movie try any harder to be Princess Mononoke? I don't know, but Origin: Spirits of the Past is up there with the most desperate of them. The story is strictly speaking no less sophisticated than a Miyazaki feature (in my opinion, his core ideas are simple enough) and the themes, details of the world, and overall feel of Origin are similar to Mononoke. However, the delivery is half-hearted at best, with mediocre plotting marring the entire process. Moreover, the actual writing suffers from lack of any real tension and the characters are as flat as a wall (and roughly as interesting too).

I found a scene often began with great promise, but then reigned in the tension just before it could build to an engaging level. Every time a problem arose, it would be dealt with in an efficient manner, as if the film was more concerned about reaching the end than taking the journey. For example, Agito eventually develops in an interesting way, but what should have been a cool idea comes off rather poorly simply because he never earned that development. Most heroes go through some trial or other, something to mark their passage from green youth to determined adult, yet Agito has his ‘maturity' handed to him. Even worse, the end battle is not exempt from this affliction - it is so easily resolved, with such lacklustre build-up, that it made me question whether the story was worth telling in the first place. For all the sincere promises Origin makes, for all the greatness it tries to reach, it really doesn't deliver. Let's just say that by the end, I really wasn't that bothered.

The production values are of the highest quality, which is to be expected of a 2006 feature. Origin presents the kind of world where the backgrounds are everything; I was wholly impressed by the intricate shadings, the crisp textures of the moss and rocks, and the CG water effects. In fact, the opening sequence of tree-dragons rushing towards a planet is a good example of the kind of graphics you can expect. Unfortunately, the humans are treated with less affection, even to the point where they are rendered less sharply than their backgrounds. When Agito stands still in front of a mossy wall in broad daylight, the difference becomes stark. Also, for some reason, Shunack has awfully drawn hair compared to the rest of the movie; it looks like someone dropped a bucket of white paint on his head.

The concept of extraordinary plant life existing alongside humans is done quite well, although not as inventively as in series like Jyu Oh Sei. You'll find a lot of lush greenery, but most of it doesn't look that different compared to the ordinary stuff we find in real life. Also, the idea of Toriyasdy, Shunack's usual haunt, being juxtaposed to Neutral City in the sense that it's packed with fumes, bland, cold, and industrial (a bit like Iron Town was to the forest in Mononoke) wasn't explored in enough depth to make an impact.

As far as the soundtrack is concerned, Origin has two good moments; the first is the haunting opening theme, and the second is the melodic ending theme. They aren't fantastic compared to other singles on the market, don't get me wrong, but they do stand out more than the other Origin tracks, which are suitable but not noteworthy. Shunack's gravelly voice was the most unexpected in a positive way while the rest were neither awful nor brilliant, just average. I can't say much else, really; they all had that soft spoken tone that you find a lot in Ghibli films.

Agito is your very typical adventurous boy hero with simple prospects and simple concerns. Of course, by the end, all that youthful exuberance has matured into genuine strength, so he speaks with more assurance, wears the determined frown more often than the wide-eyed gaze etcetera, etcetera. He's not memorable in the least, not in looks, not in temperament, not in terms of voice, not in actions. The only thing I could say intrigued me about him was the problem he had with his father, which was truly a unique situation, but one which was not expanded on because the story had no ambition. At one point, Agito actually started to get irritating - when he runs around in search of Tula shouting her name over and over again - because his intense concern for her comes pretty much out of nowhere. The movie doesn't give the two enough chance to build a particularly deep friendship, never mind a romantic bond, so his life-risking behaviour comes across as rather illogical.

Tula is kind and quiet and passive, and just everything you'd expect from a mysterious girl woken up by an urchin boy. I have seen characters like her so often that I now foster outright distaste for them. Usually they have blue hair, are non-human in some way, and need to be taught like babies how to live in ordinary society. They're often cute with massive eyes, linked directly to the central mystery, and speak in insipid voices that are like rasps to my ear drums. Well, leave out the blue hair, and you have Tula in a nutshell. Bland and predictable, there was nothing worth learning from her. The most she contributed to the story was to be the daughter of someone important.

Even less can be said about Shunack, Yolda the Neutral City leader, and the rest of the minor cast. They all fulfil their role dutifully, with no real enthusiasm, no ingenuity, and certainly no originality. Shunack does get a twist to his past (of course) but it adds nothing to his (lack of) personality. Lastly, the biggest disappointment of the movie is the way it skims over the forest people who appear to dominate the lives of the humans in the beginning. We learn that they don't like humans taking their water and that they have great powers, but what about their culture and how it fits with that of the humans? What about their beliefs about the world? Where do they get these magical powers from when they're supposedly, well, plants? Here we have a rich source of ideas which was left frustratingly untapped.

In the end, Origin: Spirits of the Past is just a deflated idea wrapped up in glossy presentation. It isn't the worst film in the world - it certainly wasn't the worst looking in the world - but neither did it ever range beyond the average to keep my attention. Were I new to anime and had I not watched Princess Mononoke beforehand, I might have enjoyed it on a basic level, but in light of me being a Mononoke fan, this film came across like a cheap rip-off.

It was bad. The characters were irritating, specially the MC's voice, and that, he couldn't say anything else, than Toola. And the girl... in one shot, she just watch, her love being captured by the BBEG and said, its ok. she wanted, to make the world, like it was before, and in the end, she realize, its not a good thing to do... because, they will kill almost everybody. Idk, what she expected, from those guys...

"Shoot the lava to minimalize casualities" . . .

Set in a dystopian future where the forest has all the power, we follow Agito as he fends for himself, his father and his community. One day he finds a girl who has been asleep for centuries and when she wakes she cannot believe what has happened to her world. And if I was her, I'd be pretty depressed as well as the world is beyond bleak.

We learn that in the past a scientist conducted experiments on plants which went wrong and pretty much destroyed the world, leaving the forest in charge and humans dependent on it for survival. Agito loves the forest and champions it but the girl, struggling to cope with the loss of her old world joins forces with the military to use their advanced technology from the past to wipe out the forest and start a new era for the humans.

It's obvious that Agito cares deeply for the girl and becomes enhanced with the forest's power to stop the military and save her. He does manage to do both and it was actually beautiful to see how far he would go for her. And I was ridiculously happy that she was able to wake him up from his tree state so that they could be together in the new world.

Together the world realised that the forest was not their enemy but everything they needed. In the end we even see plant pods given birth to new baby humans so I'm assuming all is well and equal with the forest and humanity now.

I wouldn't watch the anime again though. It was just too bleak for my liking and the forest was incredibly difficult to like. Plus the SPX were atrocious.

what a terrible anime, more to be discussed in video review: http://www.youtube.com/watch?v=Q-SCNS3lLMM

This anime is really depressing... The world is completely destroyed and ruled by the forest. Finally there is a girl, Toola, who wants the old world back, but everyone wants to keep her from doing that. The end was pretty weak too, they don't show what's actually going to happen to the world.I did like the music, though.